There is an underlying theme to Nude: Art from the Tate collection: the tussle between the desire to connect humanity to mythology by shrouding our naked forms in grand narratives, and the will to see human nudity both objectively and subjectively, but most importantly as entirely our own human experience. This struggle plays out as the exhibition weaves through nine rooms, tracing the role of the nude in art through recent centuries as a passage from archetypal classicism to raw vulnerability. Each room has been given either an art-historic or thematic title.

The viewer is welcomed by two figures from Greek mythology, the Greek God of the soul in Frederick Lord Leighton’s The bath of Psyche (1890) and the athletic figure of Greek archer Teucer (1881), immortalised in bronze by Hamo Thornycroft. Albeit superbly crafted, these archetypes of male and female beauty are somehow devoid of human warmth. Psyche’s pale skin, although painted in oils, has the cool perfection of marble. The smooth precision of her form is the more apparent by comparison to the slapdash sky above her, which suggests that natural beauty is nothing compared to the stony perfection of the gods. Following the path of Teucer’s arrow through the following rooms, we find the ideal nude transforming into flesh and, rather soon after, into formalism. Herbert Drapper’s Icarus (1898) is a sensual rather than athletic vision of male beauty. Across the room ropes cut into the flesh of a maiden in John Everett Millais’s The knight errant (1870); one can almost feel her skin twist and quiver as those bonds are cut by her knight errant. 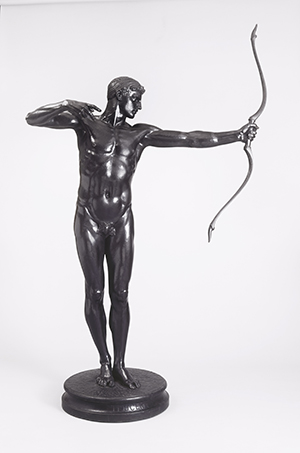 Teucer (1881), Hamo Thornycroft (Art Gallery of NSW, and the Trustees of the Chantrey Bequest, Tate, London)Rooms entitled ‘The Private Nude’, ‘The Modern Nude’, and ‘Real and Surreal Bodies’ give a neat, if didactic, summary of the role of nude in the self-styled Modern century. As one wanders from room to room and notes the simplification of form, the flattening of the picture plane, the influence of African, Iberian, Pacific art, the body fractured first through abstraction and then through surrealistic symbolism, one has the feeling of being fed bite-sized lessons in art history. Is the history of the nude in art really so neat, smooth, polished – dare I say, so European? An art history as frigidly idealised as Leighton’s Psyche does make for a coherent narrative; by the last century, the canonical history of European art must have been refined by nearly as many retellings as the stories in Ovid’s Metamorphoses; yet I cannot suppress my craving for a few rough edges, and find myself longing to be surprised. Why not take the opportunity offered by the internationalism of the exhibition – co-curated by Emma Chambers of England’s Tate Gallery and Justin Paton of the Art Gallery of NSW – to combine the collections of the two institutions? Works by Grace Crowley, Rah Fizelle, Max Dupain (the list could go on) would add local interest to the Euro-American story. Something would be gained by injecting Australian art, on Australian soil, into the viewing context of this exhibition. 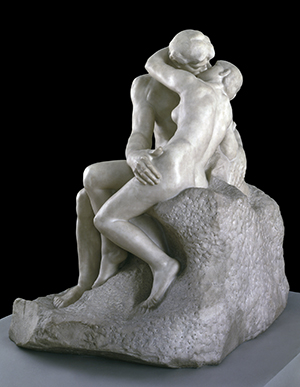 That quibble aside, the exhibition Nude is not without its breathtaking moments, most of which are the product of a truly elegant hang. One instance for me was seeing the satisfying echo of circular forms when I looked across from the shield of Henry Moore’s bronze Falling warrior (c.1956–57) to the double-face of Pablo Picasso and Marie-Thérèse Walter, joined in a kiss in Femme nue dans un fauteuil rouge (1932). The exhibition memorialises an unforgettable fusing of body and soul in August Rodin’s white marble The Kiss (1901–4). Exhibited outside Europe for the first time ever, this monumental sculpture is the star of the show. The figures (representing the lovers Paolo and Francesca from Dante’s Inferno) glow softly in the dim light of a room painted black and entitled ‘The Erotic Nude’. Couched on their high plinth, Paolo and Francesca are flanked by unassuming yet intimate sketches by Louise Bourgeois, David Hockney, J.M.W. Turner, and Picasso. Paolo’s huge muscular hands, too large for his body, are reminiscent of the hands of Lucian Freud’s lover and muse in the painting Standing by the rags (1988–89) in the previous room. Circling The Kiss, one can look back into that room and catch a glimpse over Paolo’s arched back of another arched back – identifiable as that of Francis Bacon’s lover George Dyer. Bacon’s large Triptych (1974–77), painted as a testament to Dyer after his death in 1971, is as monumental as The Kiss. Looking over Paolo’s shoulder at Triptych, the mythological bent of the nude in classic art morphs into the poignantly intimate and uniquely personal expression of the nude in late modernism. The visual cue opening upon that moment took me by delighted surprise.

‘Body Politics’ next plunges the viewer into post-modernism, where the intimacy of identity comes head to head with the meta-narrative of politics. Here, the nude returns to an archetypal symbolism. George Jules Taylor, reclining on a white sofa in a recognisable parody of the traditional female odalisque in Family Jules: NNN (No Naked Niggahs) (1974), is presented by Barkley Hendricks as black and male, and only secondarily as an individual. In three untitled collages from 1976, feminist artist Linda leaves her naked body well exposed and replaces her face with symbols of feminine domesticity – an iron, a blender, a teapot. Interesting that these works are not given the art-historical support that was so noticeable in previous rooms. Where was the Pop Art lesson? The Feminist and Gay manifestos? Happily, art-historical slogans have slipped into the background, yet while the competition of social points of view, confusing, angry, and grating, is given rein – as it should be – the Euro-American focus of the selection seems more dictatorial than ever. Works with local resonance by Pat Larter, William Yang, and Tracy Moffat (amongst others) would have been welcome here.

Nude concludes with ‘The Vulnerable Body’, rooms in which the tussle between the intimate and the mythological clinches in a duality of strength and vulnerability. In her 1982 Pink robes series, Cindy Sherman pictures herself as a centrefold model caught on camera between shoots: self-characterisation that invokes the individuality of nude models throughout time. In the catalogue, the curators explain that the technical possibility of large-format photography has encouraged contemporary artists to explore human vulnerability. John Coplans’s Self-portrait (frieze no 2, four panels) (1994) is a photographic examination of his ageing body and shows, not a god but a man; more, it persuades us to look at the ageing body as at a human truth. For this viewer, Rineke Dijkstra’s 1994 series of three photographs of mothers and their newborn babies drove the concluding message home. Three photographs, taken in three different cities in the Netherlands between February and May 1994, show three women holding their babies to their chests. They are tired, scared, and alone, fiercely protective, proud, and determined. Signs of what their bodies have just accomplished are visible in the trickle of blood running down their legs, the stretch marks, the swollen bellies. We have come a long flight of the arrow from Psyche’s perfection and Teucer’s athleticism. The combination of vulnerability and strength, of individuality and universality, is human and mythic – a reminder that gods would not exist without humans.

Nude: Art from the Tate collection is one of two exhibitions on display this summer as part of the Sydney International Art Series; the other is Tatsuo Miyajima: Connect with Everything, showing at the Museum of Contemporary Art until 5 March 2017. Nude is accompanied by a handsome catalogue with good-size pictures but not much scholarship. It is on sale at the gift shop for $39.95. There are numerous public programs surrounding the exhibition, including Thursday-night philosophy sessions with The School of Life, two performances (14 and 21 January) by the Sydney Dance Company, as part of the Sydney Festival, in which six dances responded to works in the exhibition, and workshops for children and for people living with dementia and their carers, amongst many others.

Hester Gascoigne holds degrees in performing arts, art curatorship and has recently completed a Research Masters on the nature of creative partnership. She is currently writing a PhD thesis through the University of Sydney on the role of storytelling in the life and art of three artists.

Hester Gascoigne holds degrees in performing arts, art curatorship and has recently completed a Research Masters on the nature of creative partnership. She is currently writing a PhD thesis through the University of Sydney on the role of storytelling in the life and art of three artists.