‘The Jews will not come to it because it is a Christian story and the ladies will not come because it is a virtuous one.’ George Frideric Handel’s much-quoted explanation for the lack of success of Theodora, his penultimate oratorio, may or may not be accurate, but there is no doubt about its failure. After an original run of just three performances in 1750, it was briefly revived in 1755 and then sank into obscurity. It remained, however, one of Handel’s favorite works. He complained bitterly to a couple of musicians who asked him for comps to Messiah; ‘Oh your servant meine Herren! You are damnable dainty! You would not go to Theodora – there was room enough to dance there when that was perform (sic)!’ When the librettist for Theodora, Thomas Morell, asked him if he considered the Halleujah chorus his masterpiece, Handel replied, ‘I think the chorus at the end of the second part in Theodora far beyond it, He saw the lovely youth etc.’

It took Peter Sellars’s astounding 1996 Glyndebourne staging to bring the work back from the dead. Starring Dawn Upshaw and introducing to European audiences the splendid David Daniels and Richard Croft and the irreplaceable Lorraine Hunt, Sellars brought the work into the present. As one magnificent aria followed another, punctuated by compelling choruses that range from the grief stricken to the rhapsodic and Handel’s music again and again lifted Morell’s somewhat pedestrian libretto to the heights, the audience gradually realised that they were in the presence of that rarest of creatures the ‘neglected masterpiece’ that actually was a masterpiece.

One reason for the disappointing original reaction to Theodora could have been the obscurity of its story. Morell based his text on a novella, The Martyrdom of Theodora and of Didimus by Robert Boyle. Set in Antioch, Theodora is a Christian who is condemned to prostitiution in the Temple of Venus because she refuses to sacrifice to Jove. The young Roman officer Didimus, awed by her tenacity, attempts to free her and when the attempt is foiled, joins her in martyrdom.

Lindy Hume, in her director’s notes, says when the production was planned, ‘the ascension of Donald Trump to the presidency still seemed an unthinkable possibility’. Now that the unthinkable has happened, Theodora has an unexpected relevance. Antioch, which Hume describes as ‘a brutally xenophobic world where religious and philosophical freedoms are crushed by an arrogant Roman Empire’, has suddenly become disturbingly familiar. 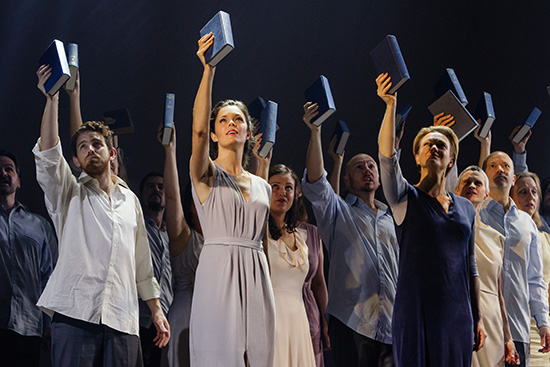 Hume’s production opens strongly. We are in a conference room in what could be the West Wing in a few months’ time. Valens, the president, urged on by his sycophantic staff, refuses the pleas for clemency of his officers, Septimus and the secretly Christian Didimus, and orders all citizens of Antioch to sacrifice to Jove. ‘They are not Caesar’s friends / Who own not Caesar’s gods.’

Designer Dan Potra has created Roman uniforms with decorative left sleeves; this helps to distinguish Romans from Christians. The sets are a series of rostra which work well on the whole but at times are disturbingly noisy when being dismantled.

Hume trusts the strength of the piece enough not to indulge in unnecessary stage business, but Theodora is essentially fairly static and occasionally the limitations of the Angel Place stage were evident. For the aforementioned chorus that ends Act Two and the magnificent aria Lord to Thee which starts the third act, here performed without a break, Hume had the excellent Cantillation wedged uncomfortably to one corner of the stage. More could perhaps have been achieved with the final scene of martyrdom. But on the whole the production flowed well, and such was the excellence of the cast and the musicians that the power of the work came across strongly.

Valda Wilson’s Theodora was no simpering virgin maid but a strong woman. She dispatched her bravura moments well, but was at her best in the more contemplative arias: Angels Ever Bright and Fair and Fond Flattering World Adieu. Christopher Lowrey was a sympathetic Didimus, his exemplary technique and superb diction serving him well. His performance of the lovely Sweet Rose and Lily was a highlight. They were mesmerising in their two duets, their voices blending beautifully.

As Septimus, the loyal Roman officer who attempts to moderate his headstrong leader, the Reince Priebus character perhaps, Ed Lyon was at times challenged by Erin Helyard’s ferocious speeds, but he came through with flying colours. 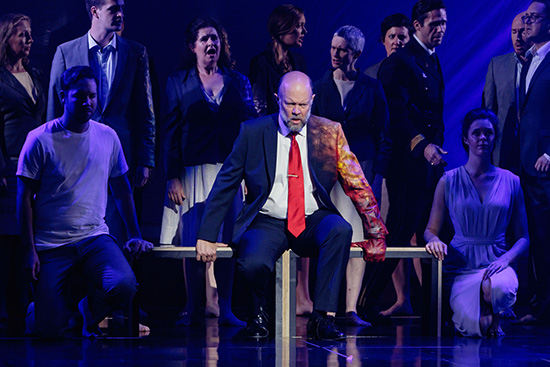 Irene, the Christian leader, is the moral fulcrum of Theodora. Elizabeth Warren maybe, although she would have resembled that formidable warrior more if she had been given her tirade against the corroding power of greed Bane of Virtue which was unfortunately cut. Caitlin Hulcup has a natural stage authority. She can command attention while simply standing still. She sang with a radiant intensity that was especially moving in Lord to Thee, in which she showed the physical and mental toll it takes to remain ‘Strong in Hope’ when everything seems to lead to despair.

Helyard led his superb orchestra in a compelling traversal of the score that was both vigorous and sensitive.

In the final chorus, O Love Divine, Cantillation gradually removed their Roman jackets, rejecting the world of bigotry and fear and opening themselves to a more inclusive one. We can only hope that the same will happen in our world.

Theodora, composed by George Frideric Handel, is directed by Lindy Hume for Pinchgut Opera. It will also be performed on 1, 3, 4, and 6 December 2016 at the City Recital Hall, Sydney. Performance attended: 30 November.