MONA is not afraid to stage exhibitions that tackle big ideas and ask difficult questions. The latest offering, On the Origin of Art, does just that. As David Walsh, MONA’s owner says, ‘Let’s see if those who have insights into evolution can tease out something about the nature of art.’

The exhibition takes its name from Charles Darwin’s famous book On the Origin of Species (1859). Via four separately curated exhibitions, it explores the nature and origin of art and creativity. Sensibly, it does not claim to provide answers. As the exhibition pamphlet states: ‘Maybe that ambition is a little lofty; maybe it lacks modesty. Humour us. If nothing else, you’ll get to see some pretty pictures.’ What really makes On the Origin of Art worth seeing as an exhibition is that it is much more than just pretty pictures. In addition to many pretty pictures, and several that are not so pretty, there are numerous other works – sculpture, installations, videos, antiquities, decorative arts – ranging from prehistorical artefacts to the present day, from a multitude of cultures. The very breadth of the selection is refreshing, with a vast number of Australian and international loans. Regular visitors to Australian public art collections will recognise their favourites. Several commissions created for MONA and the exhibition were also displayed for the first time.

Unusually, the four guest curators – Brian Boyd, Mark Changizi, Geoffrey Miller, and Steven Pinker – are not art historians or museum curators. They are ‘bio-cultural scientist-philosophers’ who are interested in exploring what is it about humans that makes us create art. They have been given the opportunity to explore their ideas in four separate but adjoining art exhibitions.

After arriving at the dramatic rock-hewn exhibition level, the viewer is presented with four open doorways to choose from, reminiscent of a set for The Magic Flute. Each doorway leads to an exhibition chosen by the respective curator. Through the informative though at times overlong audio guide, each guest curator acts as the viewer’s personal cicerone, explaining the rationale and theory for his exhibition and selection of works, followed by talks on the works in each section. Some presented better than others. Changizi and Pinker seemed to be at pains to tell the listener/viewer of their academic distinction by overstating their theories and arguments or listing publications. Boyd and Miller, on the other hand, were more relaxed and approachable; they went straight to their ideas and the works on display. Boyd judged the word length for the standing viewer, with four exhibitions to see in a couple of hours, just right. 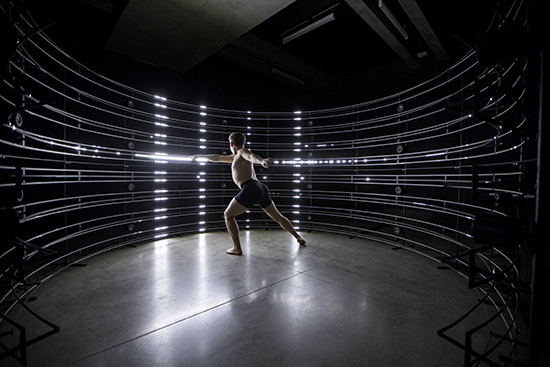 Working from left to right, the viewer encountered the exhibitions in the following order – Mark Changizi, Brian Boyd, Geoffrey Miller, Steven Pinker – but the choice of which one to enter and in which order was up to the visitor.

Mark Changizi, in ‘Does Civilisation Mimic Nature? I Believe So ...’, takes as his premise that recognition of forms and sounds and mimicking the environment around us – ‘nature-harnessing’ – is how we respond to art. To prove his point he chose sculptures and videos that relate to the body (human or animal); he included works by Barbara Hepworth, Clifford Last, Berlinde De Bruyckere, and Thomas Bayrle. An intriguing, newly commissioned interactive work, 440HZ, by United Visual Artists – UVA, responded directly to movements by the visitor, who (tentative or note) generate light and sound by moving around a circular enclosure. Indeed, it required movement from the viewer to create the work of art.

Brian Boyd’s section is entitled ‘Art is Cognitive Play with Pattern’. Boyd is interested in the roles that patterns and interconnections play in communication and how they underpin art. His exhibition begins with an engaging yellow- and black-patterned room, Dots Obsession – Tasmania, by Japanese artist Yayoi Kusama (well known to Australian art audiences), with the second room featuring patterns in nature: flowers, butterflies, birds. This exhibition continues with works illustrating his argument and ends with a room of comics and a version of Hokusai’s most famous print, The Wave. The intervening rooms present skilfully selected and arranged works that draw on patterns and interrelationships and include a marvellous group of works by Sopolemalama Filipe Tohi, Benin bronzes, and Faig Ahmed’s Liquid, a central Asian carpet whose pattern ‘melts’ off the wall onto the floor. 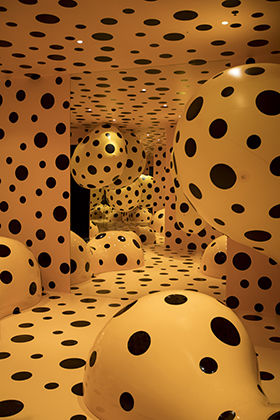 Dots Obsession – Tasmania, Yayoi Kusama, 2016 (MONA/Rémi Chauvin)Geoffrey Miller’s ‘Artists Are Sexy Af’ exhibition has the basic premise that art is about selecting mates. It began with a dazzling new work, The Centrifugal Soul, by English artist Mat Collishaw, a rotating tiered arrangement of model hummingbirds and flowers that, when spinning with flashing lights, has the effect of simulating flight, in much the same way as cartoons. Other works included paintings and sculptures where mating was one of the key subjects – we were warned – whether in Japanese shunga prints, massive history paintings such as Solomon J. Solomon’s Ajax and Cassandra, or ancient fertility figures.

Steven Pinker, in his exhibition titled ‘We Make Art Because We Can’, is interested in how art is something that has developed to give us pleasure and enjoyment. With this looser theme, the selection of works was more varied; inevitably, works from the other sections could easily have fitted in here. Pinker’s selection was refreshingly unhierarchical and ranged comfortably between paintings, sculptures, and decorative arts objects.

For this reviewer, the most successful exhibitions were Brian Boyd’s, with his fine selection of works and careful and intelligent hang, and Geoffrey Miller’s on the sexiness of art. Miller appeared to be having the most fun. These exhibitions work best when the curators worked from the subject matter and used the visual argument to make a case. Boyd focused on a visual theme of patterning which meant that the groupings and cross-links were clear to the viewer. Similarly, Miller’s selections were clear and made visual sense. Changizi and Pinker’s works appeared chosen to fit their theories (rather than fitting the theory around the work of art), rarely a successful way to curate an art exhibition. Their exhibitions included many fine works, but at times the relationship between the works and the ideas seemed forced or tenuous. These two sections illustrate one of the problems with themed exhibitions: good art is not so easy to categorise or to fit comfortably into theoretical narrative. 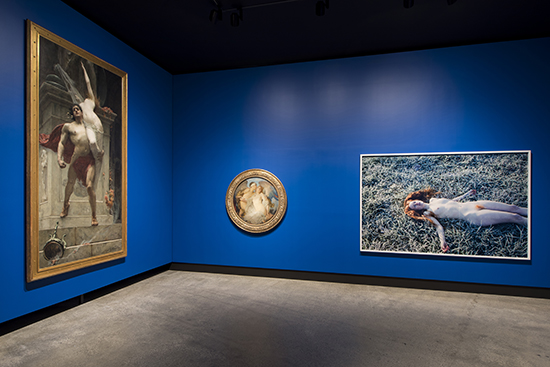 The ambitions of On the Origin of Art are high. While it may not supply many answers, it is well worth seeing for the wide range and the quality of works included, the interesting juxtapositions, and for the intellectual pleasure (and occasional frustrations) of exploring the various themes.

(There is a catalogue, quite a handsome one too, but MONA wouldn’t send us a copy, so we have no idea how much it costs.)