When is it useful for an Australian production of Chekhov to use Russian accents? What does it do to the music of Chekhov, the rhythm and flow of his brisk conversations and long grandiose speeches? And what is the symbolism of such a decision?

In this new production of Uncle Vanya (1899), directed by Nadia Tass, not only are the cast all decked out in nineteenth-century costumes and gathered around an antique samovar, but, yes, they all speak in Russian accents. It is a surprising decision given that Tass is using a more-or-less colloquial translation by New York playwright Annie Baker, full of muted but unmistakable contemporary Americanisms. Wouldn’t a Brooklynese drawl have worked just as well?

In any case, this is a strange production of Chekhov’s beautiful bittersweet play about boredom and disenchantment. There are some impressive moments, and the performances are generally good, but overall it is a hard show to really engage with. There is a nagging sense that some key ingredient is missing, or has been lost in the clutter.

David Whiteley is impressive as the thwarted but sensitive Vanya. This is the first time I have seen Whiteley, a founding member of Red Stitch, assume a major role from one of the classics, and his performance is very fine, in a quietly haunting way. His Vanya is a strong, serious, and capable middle-aged man who never entirely loses his dignity, even as he loses his illusions. We can easily believe that before the professor and his bewitching wife arrived from St Petersburg he was completely absorbed by the business of running the large estate and making it turn a profit.

Whiteley also manages to make the Russian accent disappear. Ben Prendergast, on the other hand, as Doctor Astrov, prefers to lay it on thick. At times he sounds more like a Hollywood villain than a country doctor. When Astrov is drunk, for instance, Prendergast starts dropping his definite and indefinite articles; it is almost as though he is knowingly performing the cliché, and enjoying it. In Act Two, he goes so far as to emphasise Astrov’s debauchery by performing a brief jig, which includes a snatch of the famous Cossack squat dance. It is possibly the least authentically Russian thing he could have done, and it adds to the general feeling of unreality and artificiality that hovers over this production.

Eva Seymour as Sonya, the young, good-natured, but lovesick owner of the estate, spends most of the first two acts hiding behind the samovar with her mouth half open, mechanically shaking her head. Her performance comes off as very green: everything is on the same desperate note. And yet, by the end of the night, this apparent artlessness begins to sound like a special sort of moral intensity. The force of her last speech, in which Sonya declares that only the dead are truly at peace, does much to compensate for whatever shortcomings there are in this production. 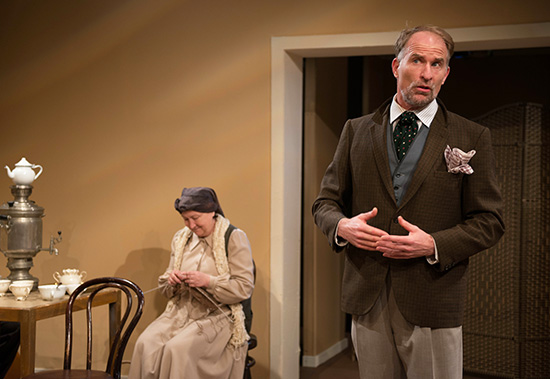 Marta Kaczmarek is charming as Marina the Nurse, and Kristof Kaczmarek is a stolid Serebryakov, the professor from Petersburg. The scene where Marina convinces the professor that he should stop hectoring everyone and gently leads him to bed is very tender and creates a wonderful moment of stillness. In general, however, I think Kristof Kaczmarek is too mild and hardly likely to inspire homicidal jealousy: he is more a bumbling oaf than a monster of complaint who is not only miserable but the cause that misery is in others. Olga Makeeva and Justin Hosking are reliable as Maria and Waffles.

Rosie Lockhart as Yelena, the professor’s sexy young wife, remains stranded between melodrama and broad comedy, much like the production as a whole. With her eyes always rolling and popping, and her coy half smile pulled in all directions, she looks something like a parody of a silent film starlet.

It is nonetheless fascinating to see Chekhov performed at Red Stitch, a company which has traditionally focused more on contemporary English and American plays than on classics. And it is an interesting venue for Uncle Vanya, given that the stage is so small. Indeed, Sophie Woodward’s set seems to exaggerate the sense of confinement. If the house is a labyrinth, as the professor at one point suggests, then it must be the kind of labyrinth that laboratory mice are placed in.

And is there a justification for doing the play in Russian accents? Isn’t there a touch of amateur dramatics about it? The much-lauded Sydney Theatre Company production that toured to the United States in 2011, with Cate Blanchett as Yelana, was also done with Russian accents; but that was for an international audience who may have balked at hearing an Australianised Vanya. Perhaps Nadia Tass made the decision simply because three of her cast already have Eastern European accents? 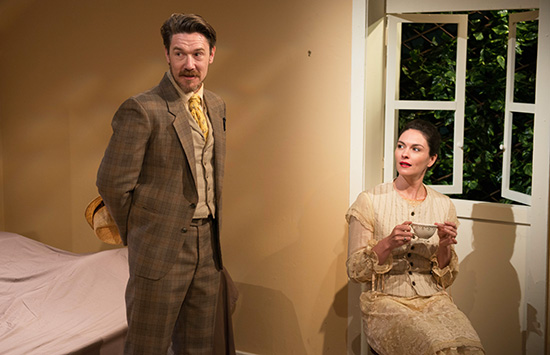 In Annie Baker’s translation, the inhabitants of the country house are repeatedly described as ‘creeps’. This, however, is too strong for Tass. Instead, she has gone back to Betsy Hulick’s 1994 translation, which renders the same word as ‘oddballs’. And why not? This is, after all, an oddball production of a play which is itself a kind of celebration of the eccentrics and cranks of the world.