There has been considerable media hype about Rose Byrne’s return to the Sydney stage in the STC’s new production of David Mamet’s Speed-the-Plow. When she does finally appear, as Karen, the somewhat gormless temporary secretary to the newly promoted movie executive Bobby Gould (Damon Herriman), she is a delight. But it is Damon Herriman who is the real star of this production.

Speed-the-Plow is a three-person, three-act satire of Hollywood and the ‘movie business’. Lachy Hume puts in a fine performance as Charlie Fox, the underling who brings Bobby the opportunity to make a blockbuster film that will make them both rich, perhaps even equals in this cut-throat macho business. At the centre of the play is the intense relationship between these two men, a longstanding friendship sustained, it would appear, by little more than ambition and co-dependency.

Mamet’s incisive wit and biting satire, combined with the excellent comic performances of all three actors, elicit fulsome laughs in all the right places. But they are laughs about a subject that is now rather dated. Speed-the-Plow was first staged in 1988. In many respects, exploring the cynicism of the ‘greed-is-good’ era seems misplaced and ultimately unsatisfying. And yet, just days after the Trump ascendancy, here is a play about two privileged and powerful white men closing deals, relishing their prospective wealth, making wagers on getting the ‘good-looking broad’ into bed, and mouthing off about ‘pussy’. Uncomfortable indeed. If only one could dismiss Charlie’s line, that men use work for power and women use sex, as the uninformed opinion of a character from last century.

In the program, director Andrew Upton writes, ‘At the heart of this play is a struggle between love and friendship.’ There is no love in sight. The struggle is between different forms of manipulation. Bobby asks Karen to do a ‘courtesy read’ of an apocalyptic novel by a famous writer. He has no intention of making the book into a movie because he is interested in money not art. Karen is enraptured by the book. At Bobby’s request, she comes to his house, knowing it is a ruse to get her into bed, and convinces him that the novel speaks the truth about wonder, meaning, and redemption. Karen is prepared ‘to do anything’ to be part of making The Bridge, or Radiation and the Halflife of Society into a film. She clinches the deal with sex. Bobby’s unravelling begins. 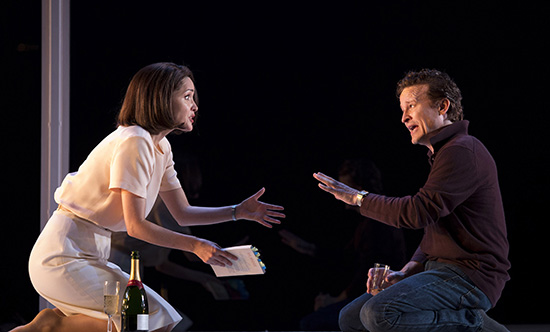 Back in January 1993, when Oleanna was making waves on Broadway, David Richard published a piece in the New York Times tracing the development of Mamet’s female characters. Pointing out Karen’s notoriety, having first been played by Madonna, Richard writes, ‘Karen herself remains triumphantly undefinable.’ So much of this play’s emotional punch hinges on Karen’s portrayal. Is she an innocent, a well-meaning idealist who genuinely seeks to make a difference in this world of superficial commerce, or is she just as ambitious and calculating as the men? Byrne’s performance dances within this cloud of ambiguity, but with no trace of sexual chemistry, let alone lust, Bobby’s transformation from swaggering team man to sensitive individual intent on pursuing truth lacks credibility.

In an interview Byrne has said, ‘Mamet is all about words on the page. There is no character.’ Arguably that is the problem with this play. Without characters, who cares? In the final act, Herriman embodies a powerful vulnerability. But this is Hollywood after all and with a change of shirt his character hops back on the corporate horse and goes in to bat for schlock.

David Fleischer’s sets shift between a poxy, windowless office swathed in plastic drop sheets to an expansive, sensuously lit (Nick Schlieper) interior that delivers the aesthetics of wealth while picking up on the play’s issues of surface/depth, reality/reflection, perception/deception. The set changes are unavoidably long. Upton tries to sustain the momentum with a soundtrack from Motorhead and The Cure. It doesn’t work. 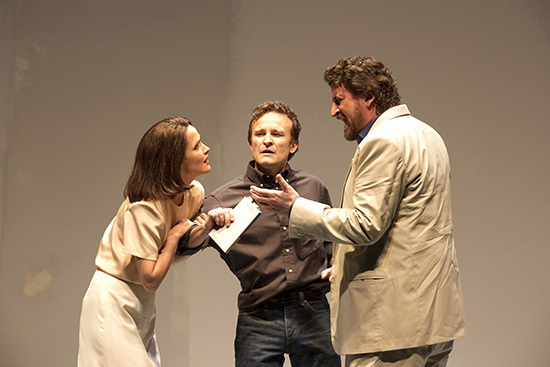 As Act Three draws to a close, Charlie says, ‘It’s only words unless it’s true.’ The audience knows all too well the narratives of greed and ambition. So there is no new message to be learned from this work. But there is a real energy about this production. Go and see it for the stellar performances and the clever dialogue.

Speed-the-Plow, written by David Mamet and directed by Andrew Upton for the Sydney Theatre Company, continues at the Roslyn Packer Theatre until 17 December. Performance attended: 12 November 2016.