Web articles proliferate that aim to show the disparity between Donald Trump’s religious sentiments (‘I think the Bible is certainly, it is the book’) and his decidedly unholy behavior (including, but not limited to, numerous allegations of sexual harassment and assault). It is from within this space – what Martin Luther King Jr called the ‘the agonising gulf between the ought and the is’ that ‘represents the tragic theme of man’s earthly pilgrimage’ – that Moliére’s great comic subject, the impostor Tartuffe, emerges.

Twice banned in the 1660s for its attack on religious hypocrisy and excessive piety, the five-act version of Tartuffe we know today finally premièred in February 1669. It was an enormous popular success, though purchasing a ticket was sufficient ground for excommunication from the Catholic Church. As is pointed out in the rambling meta-theatrical monologue that opens this Tartuffe, newly adapted by Phillip Kavanagh, religious mockery was not taken lightly in an age in which the violent polarisation of faith – Roman Catholics on one side, Protestant Huguenots on the other – was the source of profound conflict (the French Wars of Religion, and later the Huguenot rebellions).

What is there for us in Tartuffe, though, when, as historian Peter Watson has noted, religion in much of the West today amounts to little more than ‘a comic sideshow’? (According to a recent study, the fastest-growing faiths in Britain are Scientology and Pentecostalism – yes, the ones that, respectively, were started by a science fiction-writing conman, and include practices drawn from literalist interpretations of the Bible such as divine healing and speaking in tongues.) Kavanagh’s answer, realised by director Chris Drummond, lies in subtly transposing the fraught mental gymnastics of seventeenth-century religious morality to our own, ‘post-truth’ age – exemplified by the rise of Trump – in which extremities of opinion hold sway, and ideology, well, trumps reality and reason at every turn.

Moliére was fascinated by social masks, and the potential – both comic and serious – for revelation in their slippage. Here, the effect is amplified by a shift in the character of Tartuffe – played by Nathan O’Keefe as a sort of unctuous composite of Jesus Christ and the lead singer of a goth-rock band – whereby his unreflective self-belief obviates the cartoonish, knowing villainy of previous adaptations. In short, this Tartuffe believes his own bullshit, even as his convictions (if, indeed, he has any) prove slipperier than a greased haddock. 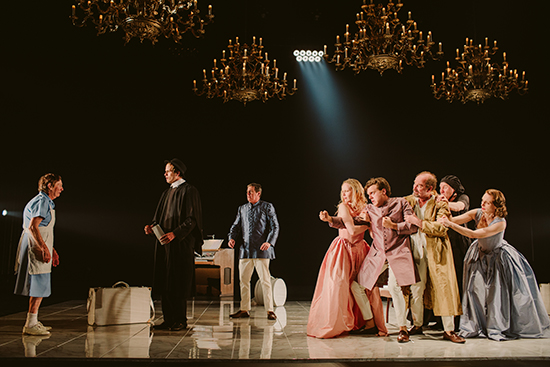 As with Andrew Upton’s recent adaptation of A Flea in Her Ear for the Sydney Theatre Company, Kavanagh retains the original play’s period setting but jettisons the playwright’s language, usually rendered in English as rhyming couplets (‘don’t worry,’ the maid, Dorine, tells us in a hilarious opening aside, ‘it doesn’t rhyme’). Instead, the characters use the kind of broad and bawdy Australian vernacular, rarely heard on mainstages today, that soaked the work of the New Wave playwrights of the 1970s like vinegar (or beer) through a rag. Double (and single) entendres abound, as does a certain cheesy ironising that – while occasionally grating, especially given the length of the scenes – is probably unavoidable in the face of the canniness of modern audiences.

There is, however, a flatness to Kavanagh’s adaptation, which doesn’t allow for many gear shifts by the cast, and avoids the play’s darker aspects. The famous table scene, for example, in which Elmire (Astrid Pill) attempts to demonstrate to the concealed Orgon (Paul Blackwell) that Tartuffe is a lecherous hypocrite is played entirely for laughs, almost erasing its unsettling subtext of rape. The actors respond to the script’s sameness of tone by pushing their performances towards caricature, although, for the most part, kernels of truth undergird each one, as they must – if, after all, they didn’t, nothing would remain to be exposed except more buffoonery, a recipe for exhaustion that would also boil away the play’s satiric effects.

It is Jacqy Phillips as a stooped, vinegary Dorine who carries the play, especially in the first half prior to Tartuffe’s notoriously delayed (and here much joked about) first appearance, setting much of the action in motion. Phillips is coarse and loud like a Commedia dell’arte Zanni, but provides a check on the confusion that surrounds her. Rory Walker’s blustering though earnest Cleante is a fine, sympathetic creation, and the younger members of the cast – Rachel Burke as Mariane, Guy O’Grady as Damis, and Antoine Jelk in a variety of roles – impress as much as their limited stage time allows, and clearly enjoy themselves. O’Keefe, meanwhile, draws on his considerable reserves of charisma and comic aptitude in rendering Tartuffe an outsized but plausible figure whose dark fascination easily answers the question as to how it is Orgon is able to fall so completely and devastatingly under his spell. It is a performance that recalls Garland Wright’s insight that the characters in Moliére’s plays speak in the over the top way they do as a survival mechanism – their words are weapons, to be wielded without concession to reason or reality in order to get ahead.

Michael Hankin’s pastel-coloured, minimally retro costumes – Regency-style coats paired with white slacks and sockless loafers for the men, and simple, close-fitted dresses for the women – effectively bridge the play’s origins and the production’s contemporary character. The set, while similarly unfussy, gorgeously evokes the opulence of the reign of Louis XIV: five ornate chandeliers overhang a floor of white marble tiles, Nigel Levings’s lighting design producing a golden, sun-like glow that contrasts sharply – and ominously – with the darkness of the exposed wing spaces. When the audience settles into their seats, the chandeliers have been lowered almost to floor level as composer Alan John, who also plays the role of Pernelle in drag, picks out corny pop songs – ‘Afternoon Delight’, ‘Je t’aime ... moi non plus’, and the like – on an upstage electric organ. 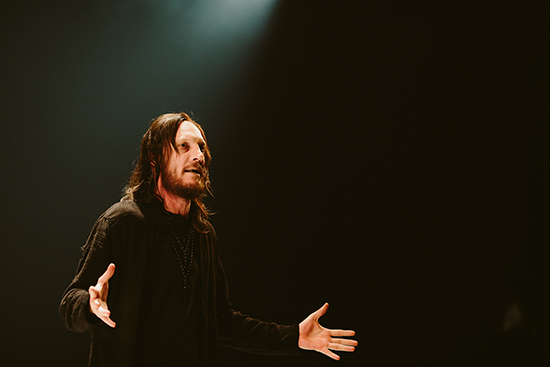 When I began this review, it wasn’t yet clear whether Donald Trump would become the forty-fifth president of the United States. As I write these words, I am still reeling from the fact that it has now come to pass. The speech that ends this adaptation of Tartuffe – a litany of progressive ideals delivered by a sort of chimerical projection of the title character – looks, in the light of Trump’s victory, impossibly utopian, even naïve. On opening night, while a Hillary Clinton presidency still looked not just possible but probable, it registered as a cri de coeur, and moved the audience to thunderous applause. I can’t help but wonder if a hasty rewrite has taken place since. Perhaps the old ending will be recuperated, the unmasked Tartuffe – trickster, demagogue, cretin – hauled away in disgrace. Trump’s installation in the White House has, as Dorine says, ‘Tartuffed’ us all. It’s hard to know if the joke can be funny anymore.