‘Music defies time but needs its timekeepers. Even beauty must sometimes grasp the grubby helping hand of the real world.’

Opera and politics are closely intertwined. The commissioning, composition, and performance of opera have been used as a political instrument in many different contexts, while the actual presentation of opera has often had an overtly political dimension, with operatic performance and opera theatres themselves constituting a significant reflection of political aspirations, national prestige, and identity.

New operas in Australia, or anywhere else for that matter, that receive a second, let alone a third production are exceedingly rare. It is greatly to be welcomed that Opera Australia is presenting Alan John and Dennis Watkins’s opera, The Eighth Wonder – premièred in 1995 – although now badged as Sydney Opera House: The Opera. This ‘new/old’ opera had its first performance on the steps of the said Opera House on 28 October 2016. (The original work enjoyed a revival in 2000 as part of the Olympic Festival, and both series of performances were generally well received by public and critics alike.)

Of recent operas premièred in Australia, The Eighth Wonder is probably the work most overtly concerned with the politics surrounding the idea of national identity, not only the building of the Opera House. The preface to the published libretto makes this explicit: ‘As personal dramas interweave with political realities a portrait is drawn of a nation coming of age. The tragic fall of the architect is balanced by the triumphant emergence of the voice of a new generation.’ All of this is couched in symbolic terms through the framing of the work in Mayan mythology; intertwining themes of individual aspiration, creativity, and sacrifice in direct conflict with political pragmatism.

Commissioned by Opera Australia, it is a large-scale, panoramic work, employing more than thirty soloists, a large chorus, and dancers, and consisting of a prologue and fifteen scenes, divided into two parts. It spans the period from 1955, when the decision to build an opera house was made, to 1973, when the Opera House was opened by the queen. It is an unashamedly ‘political’ opera in the tradition of recent so-called ‘CNN’ operas by John Adams such as Nixon in China (1987), The Death of Klinghoffer (1991), and Doctor Atomic (2005), but it also has something of a pageant quality that one finds in some of the work of Philip Glass.

It interweaves dream-like sequences set in Mexico at the time of the Aztecs, New South Wales parliamentary wrangling over the decision to build an opera house, the aspirations of the young singer, and several satiric scenes depicting the fickle public attitude towards the building. The opera has significant self-reflexive qualities – the narrative of the building of the opera house culminates in an opera performance within the actual opera theatre itself – and there are important meditations on the nature of opera and performance, all explicitly linked to the polemic surrounding the actual viability of opera as an art form within a post-colonial society such as Australia. 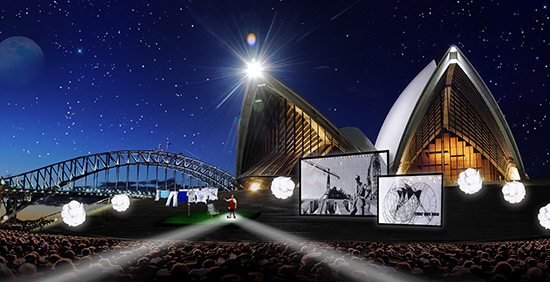 The opera’s eclectic score combines popular musical styles ranging from a quasi-pop idiom, unashamedly music theatre elements, to operatic music of great expressivity and intensity, characterised by a strikingly flexible and imaginative use of the orchestra. The libretto is an amalgam of poetic language and slangy Australian vernacular. Some of the most effective scenes occur in the confrontations between the Architect and the Politician, where the politics of the work are most direct and explicit, as well as in the lyrical moments between the Architect and Alexandra, the young singer, whose dilemma is emblematic of the challenging career paths followed by many Australian artists.

The current performance takes place on the steps in front of the Opera House with the famous shells in the background, and has been nicknamed the ‘Silent Opera’ by some: the audience is equipped with headphones through which they listen to the performance, with the orchestra and chorus housed within the building. The action takes place on the steps with the audience arrayed below. This might be seen as a gimmick, but it is particularly effective in this context as the Opera House provides a unique backdrop to an opera about its construction. The use of ‘live’ sound in this space would be virtually impossible.

So did it work this time round? Of course there are always pros and cons. One cannot cavil regarding the impressive setting and innovative staging, but some might miss the frisson of live performance – the unique sensation of strong, unamplified voices on one’s skin and penetrating one’s bones. Nothing can replace this, and there is a feeling that one might be listening through quality headphones to an opera performance on a digital platform such as Spotify. The voices sound as natural as is possible given current technology, but amplification evens out disparities in vocal size, quality, and projection, a large part of the attraction of live opera. However, the words are much clearer than often is the case in the theatre, making the surtitles virtually redundant.

The performances were uniformly strong, dominated by Adam Frandsen as The Architect, and Stacey Alleaume as Alexandra, the young aspiring diva. Frandsen coped well with the high tessitura and length of the role, his attractive lyric tenor only occasionally showing some signs of vocal strain. While his English diction was impeccable, the occasional Danish inflection was appealingly appropriate. Alleaume is a real find, a lyric soprano of warmth and substance with a radiant stage personality. One highlight – despite a rather heavy shower – was her singing of a sonnet celebrating Sydney, ‘When English ships first sailed between the Heads’, which revealed an expressive singer with much potential. 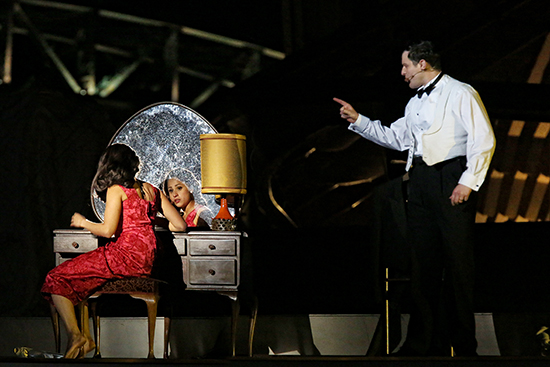 Martin Buckingham as The Premier, and Samuel Dundas as The Politician, effectively represented conflicting political imperatives, both displaying strong vocal resources and creating distinctive characters. David Greco sang The Engineer – a character truly between a rock and a hard place – with great commitment, sympathy, a full, rounded tone, and a lithe stage presence. Adrian Tamburini’s smooth, rolling bass conveyed the duplicity and opportunism of the conniving Maestro, a figure who survives all the vicissitudes that plagued the project but finally receives his comeuppance when Alexandra returns in triumph to star in the opening performance.

The smaller roles were comparable in quality, with singers often playing multiple characters. David Parkin was a suitably gruff but sympathetic father to Alexandra, while Michael Petrucelli was a lyrical partner and later husband to her. Eva Kong, Anna Yun, Rebecca Carter, Jermaine Chau, Simon Meadows, Zoe Drummond, and Nicholas Jones, fine singers all, contributed strong and distinctive vocal and stage presences to the various characters they portray. Gerry Connolly was a suitably regal, if somewhat caricatured, Queen Elizabeth in a series of humorous exchanges at a party on her yacht.

A large part of the success of the performance must go to Anthony Legge, who conducted the orchestra and chorus ‘off-stage’ in the actual Opera House. Coordination with singers in front of the building was via a large monitor behind the seating, but there were few moments when one felt that communication between orchestra and stage was shaky. The steps of the Opera House is an expansive, wide-screen space to fill, but David Freeman directed the performers with an acute eye for detail, effectively using body language to convey character to the audience who are at some distance from the ‘stage’. 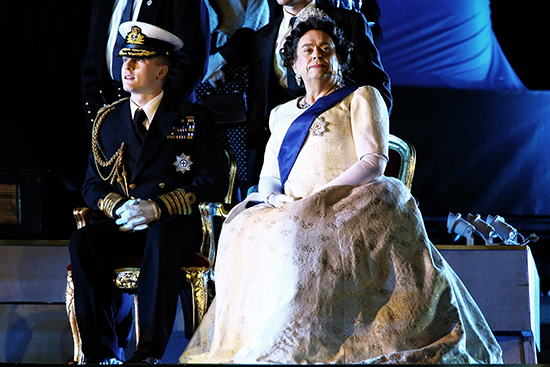 Freeman is aided by the innovative and flexible sets and Dan Potra’s striking costumes, which are complemented by Trent Suidgeest’s stark but subtle lighting. Small playing platforms were moved back and forth as the action progressed, drawing the focus to small details of character and action, all overshadowed by the looming presence of the House itself. Evocative and effective projections added context to the events without dominating the performers, as is often the case. The sound designer, Tony David Cray, deserves many kudos for the uniformly excellent sound quality.

Purely coincidentally, a few days before the première, the National Opera Review was released by the federal government. This new production answers some of the questions that the Review poses. All in all, it is a remarkable opera that caught the attention of the public when first performed, and this production should attract a new audience. It is good to see a large-scale work – increasingly rare these days – which shows great skill in blending various stylistic influences, as well as revealing a sure sense of dramaturgy from both librettist and composer. On one level, Sydney Opera House: The Opera is a nationalistic piece with occasional lapses into caricature and stereotype, but it has a very Australian sense of playfulness and irony that thumbs its nose at taking this all too seriously. It is a work that imaginatively, entertainingly, yet critically engages with recent and controversial history, and its role in the burgeoning mosaic of national identity.