Well, it wasn’t the usual demure Melbourne Festival crowd that piled into the Merlyn Theatre for the opening of Life and Opinions of Two Dogs (★★★1/2): the local expat Chinese community was out in force, and the place was buzzing.

Two Dogs follows the adventures of a couple of country mutts – played by Liu Xiaoye and Wang Yin – who leave home to seek fame and fortune in the big city. It’s an absurdist fable, with the two dogs tossed from emergency to emergency. They’re locked up, beaten up, targeted by the police and by criminal gangs, and generally abused.

Director and writer Meng Jinghui has created a kind of Chinese Goon Show for the twenty-first century: a messy satire that is part punk-rock revue, part sketch comedy show, part unclassifiable flight of the imagination. No twist is too surreal, and the performers are licensed to improvise and digress whenever the vibe feels right.

Beneath the entertaining zaniness, there is something serious and pitiful in the story. It reflects, in an oblique way, on the experiences of China’s migrant labour force, those who move from the country to the city in search of work and are often treated like second-class citizens. In this respect, the show has a lingering pathos reminiscent of Charlie Chaplin’s City Lights (1931).

Two Dogs is enormously popular and has been touring the world for almost a decade, but there is still plenty of energy in it. The frequency with which the two performers to go off-script creates a number of translation issues for non-Mandarin speakers. There are long intervals where the surtitlist gives up completely. On the other hand, this is the sort of broad farce where even a limited amount of Mandarin goes a long way.

Liu Xiaoye, who has been in the cast from the beginning, is an inspired clown. He also does a passable job as garage-band bawler, closing the show with a strained version of ‘I Wanna Be Your Dog’ by The Stooges. Meanwhile, Wang Yin is more of a handsome leading man.

For an expat community, the attraction of Two Dogs is obvious: life in an unfamiliar city can be hard, even if it is ‘the world’s most liveable’. There is a recurring note of wistfulness in this show that must surely resonate with those who are a long way from home.

And, of course, it’s also a vehicle for two gifted comedian to go a bit crazy – and to bring audiences of all backgrounds along for the ride. 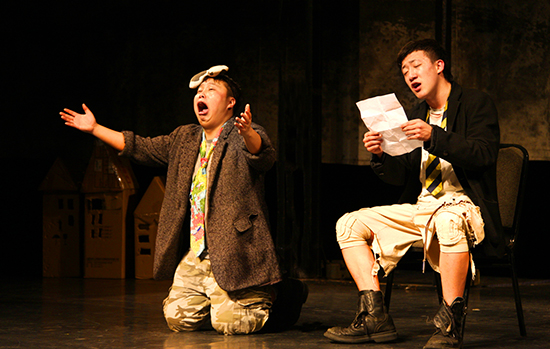 In recent years, Lucy Guerin has provided choreography for Medea at the National Theatre and Macbeth at the Young Vic. They were both extravagantly grisly productions, and yet neither was as determinedly macabre as The Dark Chorus (★★★★).

There are five principal dancers dressed in black Victorian gowns and a supporting ensemble of ten secondees wearing the sort of sinister monkish habits you expect to read about in Horace Walpole or Matthew Lewis. They all move, shuffling and scuttling in the shadows, around a large circle of white light centre stage. The five dancers whisper fragments of old gothic romances and perform nervy little mimes as they go around. Arms held crooked but raised high suggest empty ruins and bare branches; the rustle of the heavy cloth adds to the theatrical atmosphere. Individual dancers step out of their elaborate black costumes and, wearing plain white shorts and T-shirts, enter the light. An interesting tension quickly develops between what happens inside and outside the circle. The dancers inside the circle act like puppets, moving in short almost mechanical phrases before lapsing into stillness. The dark chorus leers from the edge of the circle, whispering commands. In one brief episode, two dancers box like wooden toys; when one collapses, the epicene chorus applauds. These might be cousins to the vampiric pale-faced villains in Alex Proyas’s Dark City (1998).

At the centre of the work is a long section in which dancer Benjamin Hancock is ordered to dress up as a petrushka marionette, complete with little red pointed hat and flappy tutu. The chorus then instructs him to perform a series of dances with a cardboard box. Although innocent at first, it is a game that quickly turns cruel. Soon the chorus is urging him to abuse the box in all sorts of disturbing ways. 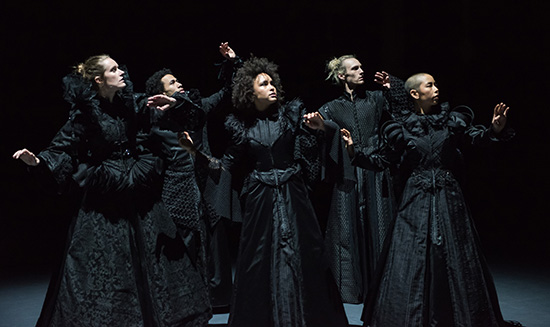 At times, the theatricality of the contrast between dark and light comes off as a bit camp, like the blackest kind of slapstick; but The Dark Chorus also has a nasty edge, and there are images here that endure in the mind as the possible shadows of something real and dangerous and at large in the world.

The latest Melbourne Festival show from Geelong’s Back to Back Theatre, Lady Eats Apple (★★★★), is a spectacular journey toward the heart of the theatre. The journey is a spiritual one, but it begins with a literal descent into the back-stage area of Hamer Hall. The audience is led down past the changing rooms and then up into a large inflatable dome where we discover performers Brian Lipson and company ensemble member Scott Price dressed like a couple of veteran stagehands. Price, we soon learn, is an insecure and querulous demiurge, while Lipson is his long-suffering assistant. God conjures the heavens and the earth and humankind, all the while complaining that his assistant doesn’t give him enough respect. Then there is the inevitable fall, and God tears down the black dome, revealing a larger white dome beyond it. The lights dim and we watch indistinct bodies moving against the grey background. Centuries pass while we listen to a heavily distorted guitar droning and buzzing. A bluish sort of ectoplasmic effect flickers between the hooded figures. Does it represent a sort of eternal flame passed down through generations of the faithful? Finally, the white dome also collapses and we find ourselves seated on the stage staring up into the almost deserted stalls and circle. It’s a stunning transposition. 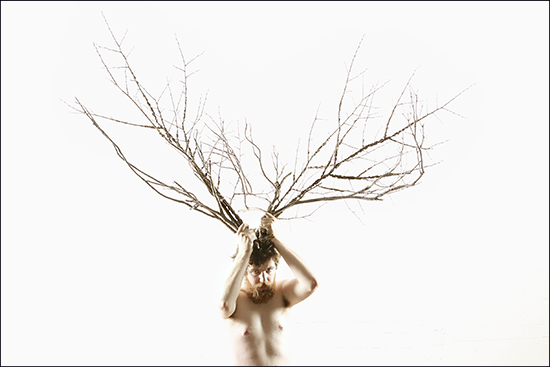 The program announces that this is the company’s largest-scale work to date. Well, the size of the show is certainly dazzling. But I wonder if the special effects and theatre tricks haven’t overshadowed the people and their story, something you couldn’t say about previous Back to Back productions like Ganesh Versus the Third Reich (2011) and Food Court (2008).

Lady Eats Apple aims to merge the epic with the everyday, and the link between the mythical Adam and Eve glimpsed at the start of the show and the contemporary couple seen in the last act is clear enough; but it is a connection which is understood on an intellectual level rather than felt. The stage machines are so big, the figures so small and so far away, and there is so much empty space. And yet the final scene is a beautiful one, bringing us back to the bare theatre, after all the tinsel has been taken down. While the ensemble vacuums the floors and talks about their weekend plans, Brian Lipson lies motionless at the bottom of the stage like a fallen angel.