There have been a handful of occasions in my life when I have stood before a work of art intending to look at it, appraise it, only to find myself drawn into it. In some strange way I become part of the work. It is as if my imagination has merged with the imaginative space of the art work and, at the same time, any mind-body split has been dissolved. I have, simultaneously, a visceral and imaginative response to the work – the heart rate increases, the stomach plunges – and yet I am strangely incorporeal. I am all mind, all sensation. It is a pure, original, all-consuming experience.

The first time this happened I was standing in a large room at the old Tate in London, the walls of which were covered with huge Rothkos. I was wrapped in Rothkos. Then, all of a sudden there were no edges and I was floating in these paintings and pounding with their rhythm. Even more extraordinary, I was filled with a type of knowing that, for someone with a strong intellectual bent, was staggeringly new. The second time, also in London, occurred at The Courtauld when, for the first time, I saw the genius of Cézanne, saw the planes and shadings, saw the landscape through Cezanne; it changed the way I have looked at landscape – real landscape – ever since. The third time was walking through Kathy Temin’s large work ‘My Monument: White Forest’ (see my posting ‘Imagination Soup: How Novels begin’). I was absorbed into this large installation so profoundly that I was transported back ten years to a visit I’d made to Auschwitz-Birkenau – one of the places, I would later discover, that had inspired this work of Temin’s. There was no prior knowledge here, no intention, rather my imagination and the imaginative space of the artwork merged.

It has just happened again with Absent Bodies by Chiharu Shiota. This beautiful art work (15 x 4.5 x 4.5 metres) takes up half the space of the Anna Schwartz Gallery. It is a huge complex web, or rather webs constructed from smooth red yarn. The obvious analogy is the network of neurons in the brain, the long axons, the ganglia where nerves meet, blown up to the size of a small house. But to reduce Shiota’s work to mere physical presence is to leach it of power and effect. 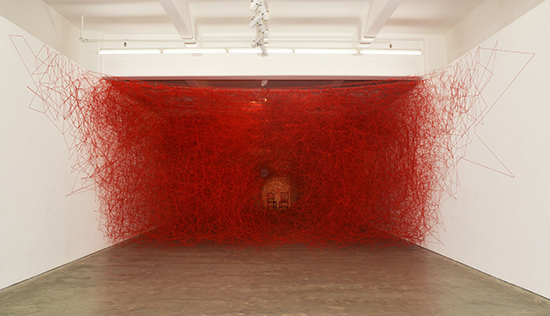 Shiota’s art work knows space, possesses space in the way, say, of the Grand Canyon or the open vistas of Antarctica – or, indeed, the unfettered imagination. The tangle of red string creates an environment. Even though you stand at the edge you enter it (and yet physically you can’t enter it because the strings, criss-crossing in all directions, would stop you.) Again, that sense of an imaginative space being coterminous with your imagination. Where the threads meet and cross one another, they are not knotted – there are no knots in this tangled environment – rather they twist around one another. Through the middle the threads thin out, may even disappear, creating a tunnel that leads to two chairs at the end; they are vacant, they are waiting for you.

This is an environment of complexity and possibility, just like the imagination. It’s all about connection and space, creativity and insight. And it opens a fourth dimension – not time (in fact time is stationary in this sort of unregulated experience). The dimension running along the consciousness–unconsciousness continuum releases the imagination itself, a numinous presence that simultaneously envelops depth and motion, memory and forgetting, experience and insight. This artwork becomes you. 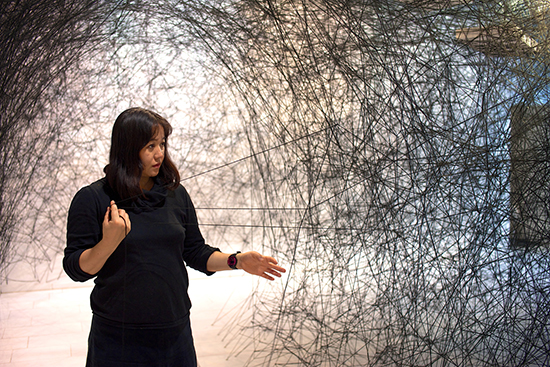 Absent Bodies by Chiharu Shiota is being shown at the Anna Schwartz Gallery in Melbourne until 5 November 2016.