‘Throughout the whole duration of the Festival, food forms the chief interest of the public; the artistic representations take a secondary place. Cutlets, baked potatoes, omelettes – all are discussed much more eagerly than Wagner’s music.’

It was hard not to think of Tchaikovsky’s words, written during the first Bayreuth Festival (1876), at the opening night of the Metropolitan Opera’s 2016–17 season. Arts Update, selfless as ever, had gone ahead of the ABR US tour party, still rusticating in New Haven, for the American première of Mariusz Treliński’s production of Wagner’s Tristan und Isolde, conducted by Simon Rattle. Instead of cutlets and omelettes, picture long-trained gowns and copious bling. Despite the queasy lure of the first Clinton–Trump debate, all of New York seemed to have turned out in a gaudy re-enactment of the opening scene of Martin Scorsese’s film The Age of Innocence.

With film and television stars posing for selfies, it felt like an incongruous Wagner audience, but after all the exhibitionism and hereditary hauteur – and following a rousing rendition of ‘The Star-Spangled Banner’ (lustily sung by the audience, many of them hands on heart) – everyone settled down and sat quietly and attentively for the next several hours. Hardly anyone left during the second interval, which was when the inglorious debate was due to begin. Perhaps something else was at stake here.

That morning, in New Haven, during a tour of the newly reopened Beinecke Library, a librarian had shown the tour party some treasures from the collection. These included the Oz papers of Richard Neville (the Beinecke holds all his papers) and James Merrill’s very own ouija board and chipped Staffordshire tea cup, which the poet deployed to commune with earlier poets. We thought of Merrill again that evening: his late poem ‘The Ring Cycle’, about the 1939 Met Ring, which he attended as a boy. Merrill wrote: ‘Wagner had been significance itself, / ... A music in whose folds the mind, at twelve, / Came to its senses.’ 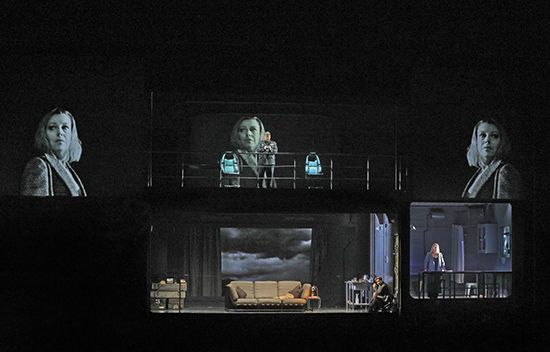 Was this a kind of collective coming to our senses, despite the shrill idiocy that Trump – Manhattan as they come – represents?

Significance was thus augured, and significant it duly was – an unforgettable night of music-making with superlative performances from the two principals and a magnificent interpretation from Simon Rattle in a rare appearance at the Met that drew a huge ovation.

Mariusz Treliński – originally a film-maker (much influenced by Fellini and Tarkovsky) – has been artistic director of the Teatr Weilki in Warsaw since 2005. This is his second Wagner (Der Fliegende Holländer preceded it in Warsaw in 2012), and only his third opera for the Met. His pairing of Iolanta and Bluebeard’s Castle in 2015 drew much praise, but Tristan – which had its world première in Baden Baden in March 2016 – was more controversial on opening night. A rump of conservatives booed loudly at the end, but mostly the audience responded warmly.

Arts Update – no admirer of directorial wackiness or superciliousness – was struck from the outset by the production’s seriousness and coherence. During the Prelude, a huge nautical compass is projected onto a scrim (Bartek Macias is the video designer); then a warship heaves through surging seas at the conclusion (if it can be said to conclude) of this most potent and original prelude (one in which Bernard Shaw thought he heard ‘an astonishingly intense and faithful translation into music of the emotions which accompany the union of a pair of lovers’). There was no gimmickry here, no fancification, no irreverence, no tedious floundering around for a modish effect. In an illuminating profile in the September 2016 issue of Opera magazine, Treliński told George Loomis: ‘I watch the stage through the camera’s lens, but that doesn’t mean I’m looking for realism. I believe in the primary language of images and their archetypal depth. Images have multiple meanings and can say much more than any words.’

The three-decker warship in Act One – set well back on the vast stage – permits multiple narratives as Tristan escorts Isolde to Cornwall where she will marry his uncle, King Marke. Penned in her stateroom, Isolde is under constant surveillance. Marc Heinz’s lighting is evocative: mostly blacks and greys and a kind of bruised gold (until the green dawn of the Love Duet in Act Two). The costumes are martial; even Isolde affects a long leather coat for much of Act Two, before stripping down to a calf-length red dress when Brangäne’s furtive love potion takes effect. 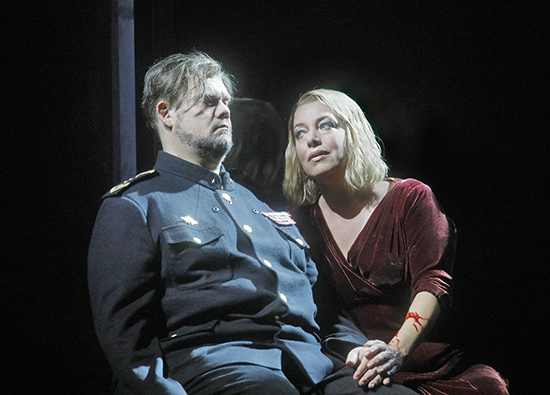 Treliński’s third-act introduction of a boy representing the young Tristan (orphaned at birth and forever longing for his parents) may disconcert some, but this novelty seemed earned, implicit, and the long scene when Tristan stumbles through the wreckage of his primary house was compelling. Rather than merely subsiding after Tristan’s death, Isolde hurried things along by slashing her wrist before joining Tristan at the right of the stage – two spent lovers on a bench. Without flagging, the cast had clearly responded to this thoughtful director. Perhaps the best dramatic moment came when, love potion consumed, Tristan and Isolde wheeled druggedly and confusedly around the stage, shocked by what they had unleashed.

The music of course tells us everything we need to know. It is impossible to hurry or disrupt Wagner, such is his conviction. As Alex Ross has written, ‘Somehow, Wagner retains his identity even when all hell is breaking loose onstage.’ It was a glorious if shattering thing to hear the incomparable score played by this exceptional orchestra under the baton of Simon Rattle. Never did it seem languid or indulgent. There was crispness here, an elegant urgency, and thrilling power when the score warranted it. Perhaps the greatest moment came during the introduction to Act Three, with the solo cor anglais.

Great singers define any Tristan und Isolde, and this house has idolised some of the best. Nina Stemme’s Isolde – perhaps her hundredth, but her first at the Met – will assuredly be talked about in decades to come. Arts Update last heard the Swedish soprano in 2011, as the three Brünnhildes in Francesca Zambello’s Ring at San Francisco (now scheduled to be revived in June 2018). The last of those appearances (Götterdämmerung) was the finest individual performance we’ve heard – until Tristan und Isolde. Even after a decade of huge Strauss and Wagner roles, Stemme’s voice is uniquely well equipped for this role. Her Liebestod, after four hours’ singing, was remarkably powerful – a sort of miracle. Stemme is also one of the finest singing actors, always in character, listening, intuiting, alert to others. It is impossible to think of her striking the sort of stale attitude we associate with Wagnerian sopranos. Stemme would have been a magnetic silent actress, and the huge video projections of her are fascinating studies in themselves.

Wagner once said of Tristan that he was like a fish left out in the sun. Joachim Köhler, in his biography Richard Wagner: The Last of the Titans (2004), wrote: ‘Never again was Wagner to expose himself and his heroes to such suffering, but neither was it necessary for him to do so, as they were all now prepared for it philosophically and creatively.’ Treliński offers a journey of self-discovery, a journey into Tristan’s psyche. He has said of Tristan: ‘At night he finds his inner truth as one who is fragile, sensitive, with feelings of his own. It is in the world of night that he develops his transcendental dream about perfect love, a love that is not of this world.’

When Arts Update interviewed Stuart Skelton earlier in the month, during rehearsals, he spoke of his ‘year of Tristan’. Following his début in Baden Baden (also with Rattle), he sang the role for the English National Opera (in English). The Australian Heldentenor, a commanding presence on world stages for two decades and a brilliant Siegmund in Australia’s two most recent Rings (Adelaide, 2004; Melbourne, 2013), described Tristan as his Everest – the culmination of everything he ever wanted to achieve as a singer. Skelton was in thrilling voice during Act One, and he complemented Stemme beautifully in the Love Duet (‘O sink hernieder, Nacht der Liebe’). Act Three is exacting for any Tristan – this hardest of tenor roles – but Skelton was superb throughout. 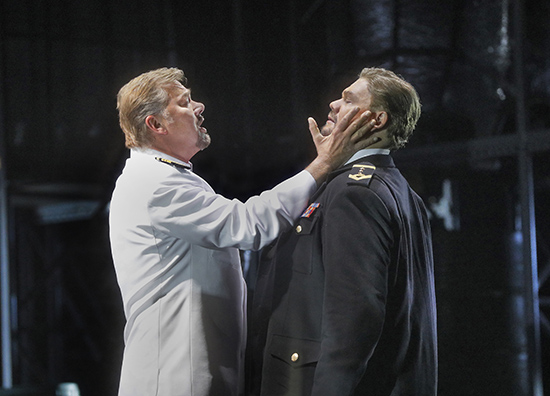 Brangäne, Isolde’s companion, has some of the most beautiful music in the opera: ‘Einsam wachend’, after the Love Duet. Ekaterina Gubanova, a Russian mezzo, sang well but there was a certain diffidence at the top of the register. René Pape has been singing King Marke for years, and he is nonpareil in the role.

Done nobly, with integrity, Tristan und Isolde (the ‘true opus metaphysicum of all art’, as Nietzsche dubbed it) has a unique effect on the listener, as Wagner knew it would. While composing it, he told Mathilde Wesendock, his inamorata and muse: ‘Child! This Tristan is turning into something terrible! Only mediocre performances can save me. Perfectly good ones will be bound to drive people mad. I cannot imagine it otherwise.’ Indeed, he admitted to ‘bursting into floods of tears while working on the score’. The harmonic audacities he wrought still have the power to transform audiences – even in the age of selfie bliss and Donald Trump.

As we know, Nina Stemme and Stuart Skelton will sing highlights from Tristan und Isolde with the Tasmanian Symphony Orchestra on Saturday, 19 November. It promises to be one of the concerts of the decade.

Tristan und Isolde by Richard Wagner is produced by Mariusz Treliński for the Metropolitan Opera. The production runs from 26 September to 27 October. Performance attended: 26 September 2016.