Frida Kahlo and Diego Rivera are, without a doubt, the two most famous Mexican artists of the twentieth century, as notorious for their scandalous relationship and political views as they were for their creative genius. She was twenty-one years younger than him; he was a communist. Kahlo had an affair with Leon Trotsky; Rivera had one with Kahlo's sister. They married, divorced, and remarried a year later which, for the ultra-conservative environment of Mexico in the 1920s and 1930s was, to say the least, unusual.

The current exhibition at the Art Gallery of New South Wales, Frida Kahlo and Diego Rivera, features works from the collection of Natasha and Jacques Gelman. The Gelmans were an Eastern European couple who emigrated to Mexico City in the late 1930s, where they met, fell in love, and started their art collection. During those tumultuous years, Mexico witnessed an influx of European refugees, including some of the most important figures of the Surrealist movement. At the heart of this artistic and intellectual whirlwind were Rivera and Kahlo.

Kahlo was a true revolutionary in every sense of the word, fearless and indomitable like Che Guevara, whose visage nowadays is similarly reproduced on shirts and mugs the world over. She taught herself to paint after an accident that almost cost her her life left her bedridden for months. Perhaps as a consequence, Kahlo's works are richly introspective. Her self-portraiture constitutes a considerable part of her oeuvre, where she features as the central subject of her paintings. Rivera, on the other hand, was explosive, expansive, larger than life. His masterpieces are predominantly murals strewn across Mexico City and other parts of the world.

The exhibition mediates a dialogue between Kahlo and Rivera. It opens with one of Kahlo's masterpieces, Diego on my mind (Self-portrait as Tehuana) (1943), where Kahlo depicts herself in the garb of a traditional Tehuana, the indigenous Zapotec women of the state of Oaxaca, renowned for their rebellious attitude to men. On her forehead, above her eyebrows, where the third eye of spiritual enlightenment should be, there is a picture of Rivera. 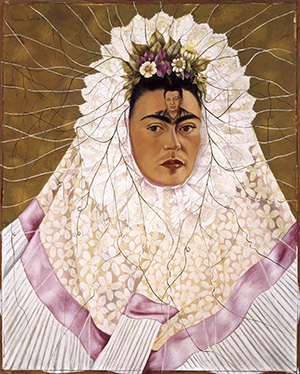 Diego on my mind is followed by Calla lily vendor (1943), which shows one of Rivera's recurring motifs, exuberant, long-stalked white lilies. The flowers make a second appearance in Portrait of Natasha Gelman (1943), where Mrs Gelman lounges sensually on a green sofa wearing a white evening dress, her figure slender and graceful like the armfuls of sumptuous lilies in the background. Another identifiable theme of Rivera's, children with strong indigenous Mexican features, is present in two other paintings in the exhibition, Modesta (1937) and Sunflowers (1943).

Kahlo's work was transgressive, often ironic. In Self-portrait with red and gold dress (1941), and Self-portrait with monkeys (1943) Kahlo shows us her contempt for institutions, in this case, academia. Self-portrait with red and gold dress shows Kahlo from the shoulders up against an olive background. She wears an embroidered dress of indigenous design and her luscious black braids have been arranged as a doctoral bonnet. In Self-portrait with monkeys, Kahlo stands in the midst of dense foliage surrounded by four spider monkeys. She wears a white Zapotec blouse adorned with a red tassel reminiscent of the tassels used in academic headwear. In both works the commentary is clear: without the need for a university to validate her talent Kahlo, the autodidact, awards herself doctoral status.

Although Kahlo's works were subversive, unlike Rivera's murals they were rarely overtly political. Three unusual sketches in this exhibition show her views on Capitalism and the United States' government: Lady Liberty (Workers of the world unite) (c.1945), Untitled (Atomic bomb) (c.1951), and Liberty (c.1946). In these annotated studies, Kahlo depicts the Statue of Liberty as a macabre monument to Capital, holding in her right hand, instead of the torch of progress, a dangling bag of coins topped by the atomic bomb. 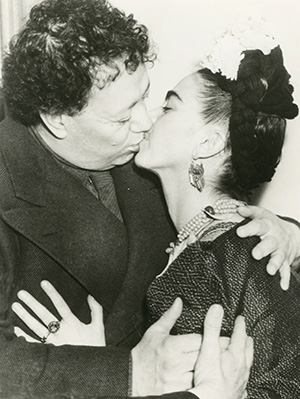 There are fifty-seven photographs arranged chronologically throughout the exhibition, the first of Kahlo as a young girl with her family, the last showing a broken Rivera standing by Kahlo's open casket at her funeral. The exhibition also includes facsimiles of letters and telegrams to and from Kahlo. The original documents are in Spanish, accompanied by electronic tablets that allow viewers to tap on the image of a letter to reveal its English translation. At the end of the exhibition there are three short 16mm silent films of Kahlo and Rivera, screened side by side in loops of one to three minutes.

This is not a behemoth retrospective, but rather a small, exquisitely curated exhibition that allows us to compare significant works by these two artists through the story of their relationship. It shows how less, when creatively and tastefully curated, can be more.

Frida Kahlo and Diego Rivera (Art Gallery of New South Wales) opened on June 9, and has been extended to October 23.