Everyone loves a youth orchestra. All that young talent and enthusiasm oozing from the stage energises and captivates. An audience comprising a good number of proud parents and friends lends a sense of heightened anticipation.

Saturday night's concert marked the homecoming of the Australian Youth Orchestra from its recent tour to Europe and China. Conducted by Manfred Honeck, the program comprised Carl Vine's Celebrare Celeberrime, Ravel's Piano Concerto in G (with soloist Hélène Grimaud), and Mahler's Symphony No. 1, Titan. This was a well-chosen and challenging program. The works give the audience a taste of all sections of the orchestra: there is not much thumb twiddling for percussionists and brass-players. It is also a risky program because there is great scope to show up weaknesses in technique, not just within sections but also with individual players.

The first work on the program, Vine's Celebrare Celeberrime, was first performed in 1993 as a commission for the Dayton Philharmonic Orchestra's sixtieth Anniversary Season and dedicated to its conductor, Isaiah Jackson. A work of approximately ten minutes, it makes an ideal opening piece: it is richly orchestrated for all sections of the orchestra and contains a raft of appealing colours and room for technical display. Everyone in the orchestra gets a guernsey with this work. After an uncertain start in the brass section, the work and orchestra settled and gave us a fine and sparkly interpretation. 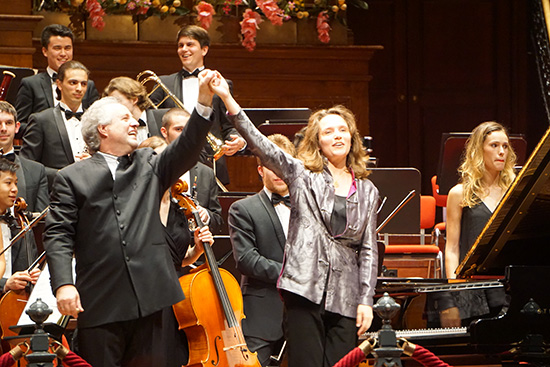 After the Vine piece, a somewhat reduced orchestra returned to the stage for Ravel's Piano Concerto in G. The tricky bits in this work are the short and abrupt rhythmic passages in the first and third movements. The soloist's and orchestra's parts do not always fit neatly together and it takes only a fraction of a second for the music to get out of kilter. The orchestra and soloist Hélène Grimaud held these movements together pretty well. The second movement, a typically slow romantic work, was less well connected. There was a bit too much rubato and the shape of the melody line was occasionally lost. This risked muddying the sound between the orchestra and piano but was averted. Overall, this movement fell too liquid, too languid.

The AYO came into its own in the performance of Mahler's Symphony Number 1. There was some marvellous playing here, especially in the second and third movements. The string playing was tight and sonorous. In particular, the cellos made good work of the more dramatic passages in the second movement, though at times the playing was a bit too robust, with bows coming down too hard. In the third movement, the strings section played beautifully in the more wistful moments. It is difficult in this work to keep up the momentum in the fourth movement – there are many false senses of endings – but the orchestra carried on and kept the audience attentive. There were occasional lapses in rhythm and accuracy in pitch in some parts of the brass section.

There were two encores. The first was 'Morning' by Grieg, which struck me as an odd choice because there's nothing much in it to show off. It was selected, apparently, to chime with 'Morning' in Europe, but it was just after 10.00 pm and hardly morning in Europe – but the work was well played. The second encore, which was a work I didn't recognise (nor did the concert-goers to whom I chatted at the tram stop afterwards), but it was a more devilish work and better suited as an encore than the Grieg. A section that mimicked 'I still call Australia home' was beautifully played, but it was quite unnecessary, as was the silly acrobatics by some of the orchestral players. All of us appreciate something innovative in concerts, but there is a fine line between something that's fun and something that's just a gimmick.

Apart from the encore there was one further oddity – the program notes. None of them was written by members of the AYO, some of whom would surely have participated in the AYO's 'Words and Music' program. In the future the orchestra members should provide some the program notes as part of their mentoring. The program notes provided were in the main well written, but the Mahler notes were reproduced and adapted from 2003 copy by Martin Buzacott. It is time some more up-to-date program notes were commissioned. 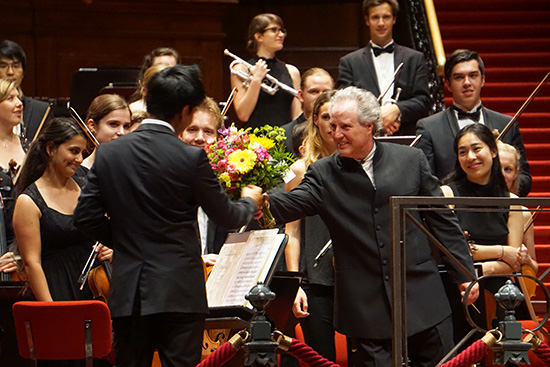 The AYO's concert on Saturday was mostly solid and enjoyable. Honeck's conducting was clear, direct, unpretentious, and unfussy. The concert started exactly at 8.00pm and the orchestral players moved swiftly onto the stage. The two encores dragged on a little making the concert end a little late, but no one seemed to mind very much.

Australian Youth Orchestra with Hélène Grimaud was performed at the Arts Centre Melbourne, Hamer Hall. The program will be repeated at the Concert Hall, Sydney Opera House on 8 August 2016. Performance attended: 6 August

Paul Watt is a senior lecturer in musicology at Monash University. His research interests including musical biography, criticism and nineteenth-century music and intellectual culture. His is the author of The Regulation and Reform of Music Criticism in Nineteenth Century England (2018) and Ernest Newman: A critical biography (2017).

Paul Watt is a senior lecturer in musicology at Monash University. His research interests including musical biography, criticism and nineteenth-century music and intellectual culture. His is the author of The Regulation and Reform of Music Criticism in Nineteenth Century England (2018) and Ernest Newman: A critical biography (2017).