Everyone agrees that the end of George Eliot's The Mill on the Floss is a disappointment. Suddenly and without much ceremony Eliot has Maggie Tulliver and her brother Tom drowned in a flood. It's a finale that has baffled and frustrated readers for more than a century and half. Can anything be salvaged from this shocking twist?

Director Tanya Gerstle has a solution, and it's a good one. Using an adaptation of the book by British playwright Helen Edmundson, Gerstle projects the image of the drowned siblings backwards onto the narrative as if it were an organising metaphor. Thus, Maggie and Tom are drowning from the beginning, and their lives are only a futile struggle toward a surface that they can never reach.

It's a melancholy vision, but it makes for fascinating theatre. This atmospheric new play begins with the bright and inquisitive heroine Maggie Tulliver as a young child reading a description of the 'ducking of a witch' in Daniel Defoe's The Political History of the Devil (1726). If the woman swims she must be a witch and be executed; if she drowns then she was innocent after all. Maggie herself is the victim of a similar kind of obstinate stupidity. Her intellectual gifts are ignored or disclaimed and she is denied the opportunity to explore her potential.

Three actors take the role of the Maggie. The first is Maddie Nunn who plays the young child, cheerful and precocious, keen on storybook adventures as well as the real-life kind. As a young adult, after her family is bankrupted and driven into what Eliot calls the valley of humiliation, she is played by both Nunn and Zahra Newman together. Newman represents the severe and self-denying nature that Maggie embraces as a way to manage the stresses of her family's reduced situation.

Finally, Maggie in her late twenties is figured by Rosie Lockhart. Here she is modest and prone to gloominess and self-doubt and is still struggling to damp her unfulfilled desires. The effect of this clever device is magical. In one very fine scene, Maddie Nunn mischievously draws aside Maggie's suitor Philip Wakem while Zahra Newman continues talking seriously and soberly about how she has forced herself to give up reading all books except the Bible. It's a beautiful stage interpretation of the moment in which Maggie's natural vivacity shines through in spite of her strenuous efforts at self-control. 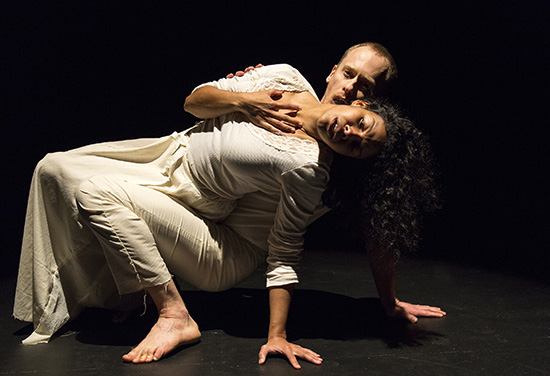 And the tripartite separation does more than simply codify Maggie's character. It also suggests something of the secret changeling in her: the protean power through which her passions are sustained but periodically transformed in the face of opposition.

The Mill on the Floss is an intimate performance piece, seating a maximum of only eighty each night. The audience sit on three sides of the square stage area, and the action surges back and forth entering the space from all directions. The props are minimal and uncomplicated – chairs and tables and bits of rope – and the story seems to spring spontaneously from the deep dark corners of the large Theatre Works hall. The physical theatre aspects of the production jibe well with the adapted text and seem like a natural extension of Tanya Gerstle's theme.

Lighting designer Lucy Birkinshaw has created an ambience suggesting deluge and submersion, as if the whole sad story was being restaged in the shadowy depths of the river Floss, moved by currents and eddies. Yahav Ron's ragged-edged white costumes suggest ghostly goings-on.

Many fascinating patterns emerge. Again and again, performers are lifted off the floor, held briefly in the light, then pushed down and sent sprawling. The context is always different, but the ultimate trajectory is the same. In one particularly effective recurring motif, Zahra Newman – as a drowned witch – appears as if dancing under water, highlighted in a narrow column of light.

Given the importance of music – and especially song – in the book of The Mill on the Floss, it is appropriate that music and the fine voices of the cast are featured prominently in this production. The regional English accents are also done well across the entire cast. 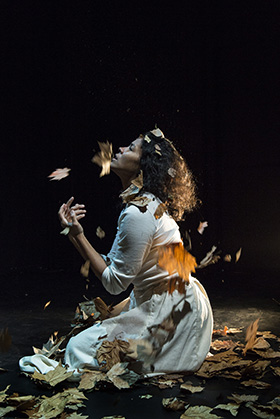 Zahra Newman in Theatre Works and OpticNerve's The Mill on the Floss (photograph by Pia Johnson)James O'Connell is a charismatic Mr Tulliver, father of Tom and Maggie. The book includes one of the most moving portraits of the love between a father and daughter in all of Western literature; some of this is necessarily lost in Edmundson's summary and in Gerstle's emphasis on the patriarchal organisation of Maggie's world. But O'Connell does enough to suggest the outline of Tulliver's affection.

Grant Cartwright brings buckets of brooding intensity to the role of Tom, the chief source of Maggie's suffering, reminding us that he too is frustrated and that he too is drowning. George Lingard and Tom Heath are apt contrasts as Maggie's rival suitors.

To treat The Mill on the Floss as the story of swimmers in distress risks morbidity. But, despite its many darknesses, its many voices crying out, this play is fully alive. Gerstle and her fine ensemble have crafted a mood in which indignation at the unfairness of Maggie's situation gradually takes hold. At least there is energy and excitement and life in that.

The Mill on the Floss, written by George Eliot, adapted by Helen Edmundson and directed by Tanya Gerstle, is presented by Theatre Works and OpticNerve. The production continues there until 13 August. Performance attended: 3 August.