With a needle on cloth, Mary Jane Hannaford preserved her sharp observations of people as stout appliquéd figures set amidst interpretative renditions of Australian animals. Late in life she embroidered favourite verses and slyly captioned her pictures in quilts for her family. Close to one hundred years later, she has a room dedicated to her art in National Gallery of Victoria's exhibition Making the Australian Quilt 1800—1950.

Leslie Levy, Executive Director of the International Quilt Study Center at the University of Nebraska, opened the exhibition with the remark that our familiarity with quilts as domestic items in daily use can discount them as an art form but the choice no longer had to be made between 'utilitarian or on the wall.' Co-curators Katie Somerville (Senior Curator, Fashion and Textiles at NGV) and Dr Annette Gero have honoured the stories and intentions of all the makers, even when unknown.

The eighty-eight quilts on show range from pristine, carefully preserved, unwanted gifts to the anonymous tatters of an old life treasured as social record. All but six are on loan from private and public collections in the ACT, New South Wales, and South Australia as well as regional Victorian collections in Kyneton, Wangaratta, and Queenscliff. Families have also lent their precious heirlooms – descendants of Sarah Louise Lording recently found her spectacular crazy quilt, made in 1888, in a family attic and were at the opening to see it admired. 'They have outlived their makers, and their voices can still be heard', as quilt historian Margaret Rolfe says.

The exhibition has a chronological layout, divided into three periods. The influence of English work, brought or sent to Australia by the earliest arrivals; the gradual adoption of Australia as a new nation through the gold rushes and prosperous times; and 'making do' through the tough and testing years of early nationhood in the first fifty years of the twentieth century. The making of intricately decorated and pieced possum skin patchwork garments, long practised by indigenous women, is referenced in two quilts made about one hundred years ago, but this is an emphatically an exhibition which celebrates European settlement and tradition. The exhibition stops short of the revivalist movement of quilt making and patchwork of the last forty years and the subsequent brilliant careers of quilt artists. 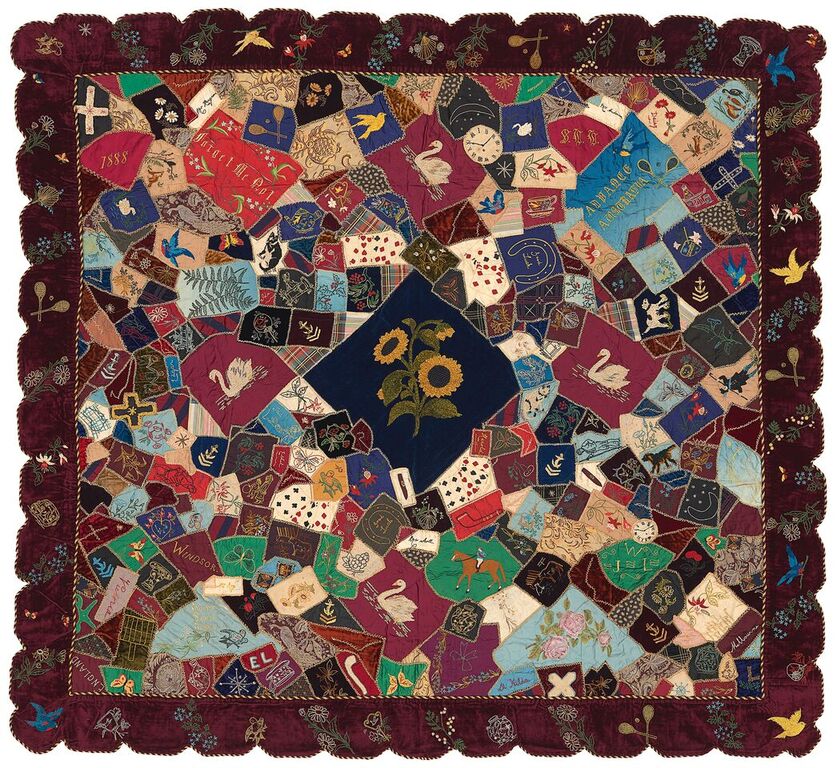 Appliqué artistry is in evidence in broderie perse of the early nineteenth century – the conservation of precious chintz led to imaginative and enhanced decorative work by makers such as Jane Judd and Elizabeth Hardy. Australia's reputedly most famous quilt, and the only documented one made by convict women during their transportation, is the Rajah quilt, from the National Gallery of Australia's collection. Spread in its display case like a filled sail, its central medallion's appliqué of birds show the hand of Kezia Hayter, who supervised the work and presumably worded the inscription.

The velvets and silks of the mid 1800s dazzle and play with the senses of the viewer. At their best, the geometry challenges and delights while their brilliant colours and textures add depth to their story. (So many crazy quilts survive because they were never used – does this make them the art quilt of their time?) Like idiosyncratic textile scrapbooks, they showcased fashionable pursuits, favourite flowers and animals, sentimental scenes as well as the names of places and people. The establishment of agricultural shows and church fairs legitimised the public display of needlework skills, and there's more than a whiff of that competitive spirit here.

The quilt made by members of the Hampson family subverted the contemporary fashion for red embroidery on cream or white ground in spectacular style. Part autograph album, part book of proverbs, the fifty-two squares depict local characters, allegiances to church, empire, and queen Contemporary textile artist Lucas Grogan spoke during NGV's Quilt Symposium held on Saturday 23 July, acknowledging the influence that this quilt had on his early career.

It's a relief, after the stuffiness of Victorian opulence, to see both fresh and faded testimonials to the end of the old queen's reign giving way to the uncertainties of a federated country in the last rooms of the exhibition. Annie Percival's patchworked cigar band table cover prefigures Rosalie Gascoigne (who made one traditional quilt herself.) The wagga, the rough and ready quilts made of whatever came to hand, evoke the corrugated iron and rough timber of itinerant workers' lives. Their survival is the most remarkable, and Fanny Jenkins' worn cretonne speaks of her attempt to make the most of a hard life. 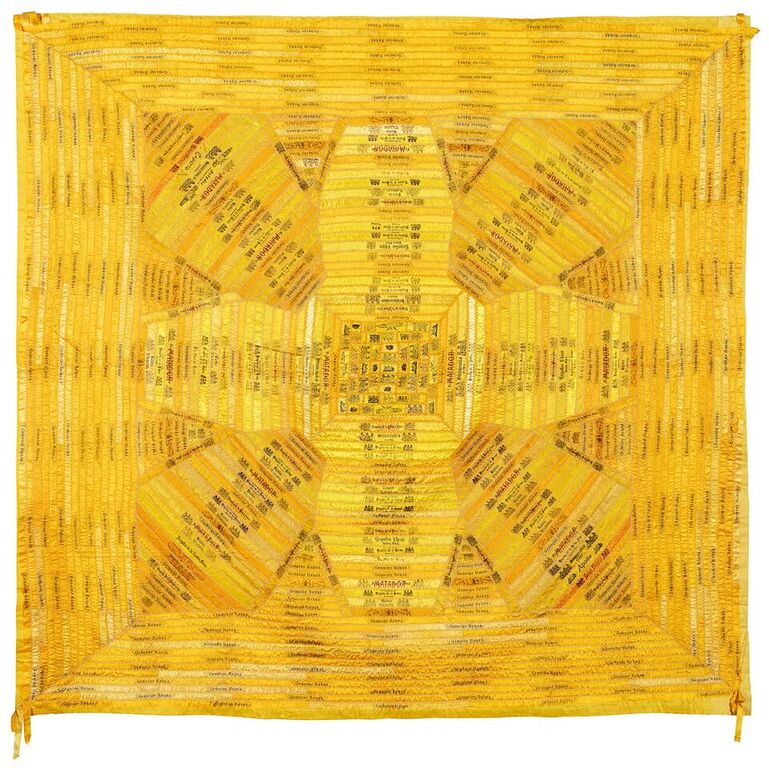 The leafy green squares of Emily McKay's Chronicle quilt from 1934 echo the border of Jane Judd's broderie perse, made in England in the early 1800s and neatly end the exhibition as it begins, with an appreciation of the artistic significance of patchwork, embroidery and quilting. Both feature in Making the Australian Quilt 1800-1950, the superbly produced catalogue of the exhibition: it had sold out within thirty-six hours of the opening, but will be available again soon.