A film sequel is always a risky venture, and thus it is with Goldstone, Ivan Sen's follow-up to his 2013 outback crime drama, Mystery Road. But it is just one risk the writer–director–cinematographer director takes with this film.

Goldstone re-introduces us to the indigenous police detective Jay Swan (Aaron Pedersen). The three years since the violent events in Mystery Road have not been kind to him. Jay is suffering from a major personal loss and hitting the drink. As the film opens, a very drunk Jay is pulled over and breathalysed by a young cop, Josh (Alex Russell), on a stretch of outback road on the outskirts of the small town of Goldstone. Seeing that Jay is over the limit, Josh roughly cuffs him, drives him to the local police station, and locks him up, only realising later as he goes through Jay's personal effects that the drunken black man is a fellow police officer.

Released next day, Jay starts work on the case that brought him to town, a federal police investigation into the disappearance of a young Chinese woman. No one is keen to help, not Josh, not town mayor Maureen (Jacki Weaver), nor Johnny (David Wenham), the sleazy local head of the nearby gold mining operation, who is in the midst of trying to wrangle approval for a multi-million dollar expansion. Johnny has the support of the corrupt leader of the local land council, but faces opposition from elements of the indigenous community, whose permission is required, particularly indigenous elder Jimmy (David Gulpilil).

Just how unwelcome Jay is becomes apparent when several unknown men shoot up his caravan in the middle of the night. Undeterred, Jay keeps probing, observing a plane-load of young Chinese women arriving on the outskirts of the mining camp. The women, who have obviously been trafficked into the country, immediately have their passports confiscated by the steely madam, Mrs Lao (Cheng Pei-Pei), who informs them they will provide sex in return for paying off debts incurred to get to Australia. 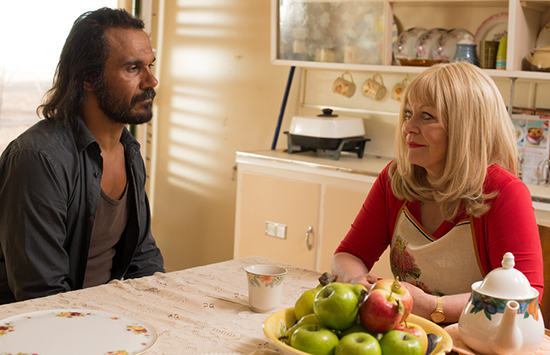 Goldstone is a contemporary Australian retelling of the classic film noir trope of the 'bad town', a place where the appearance of law and order masks corruption and greed and where the power structure is beholden to a single large criminal or commercial interest. Aspects of Goldstone's bad-town persona, particularly the quasi-paramilitary mining operation that dominates it, are rendered wonderfully. The film's cinematography is excellent, showcasing the brutality and beauty of the outback, and is further buttressed by a fine string and piano score.

Much of Goldstone's central crime narrative, the missing person's case, sex trafficking, and associated bad deeds, feel pretty obvious, and most viewers will quickly deduce the likely outcome. This sense of the obvious is emphasised by the performances of Wenham, continuing the trajectory established by his turn as an abusive cop in Jane Campion's 2013 mini series, Top of the Lake, and Weaver as the mayor. She is in good form, but her character is from the same mould as Janine 'Smurf' Cody, head of the murderous brood in Animal Kingdom (2010), complete with her now signature malevolent 'I'm not threatening you but I am threatening you' speech.

Many crimes are committed in Goldstone, only some of which are defined by the authorities as such. There is Australia's bloody history of indigenous dispossession and its fraught relationship with Asia. Sen explores issues relating to the Stolen Generations and the clash between Western corporate bottom lines and Aboriginal spirituality, also the way our mining boom is a two-way process, minerals going to Asia and human flesh coming in return.

Race dominates the interaction between Jay and Josh. Pederson is excellent, injecting even more disillusionment and loss into his character than was the case in Mystery Road. Russell also delivers a decent turn as a lonely young man, not so much corrupt as completely out of his depth. Sen leads us through the differences in their skin and culture, towards the realisation the two have far more in common than appears. Jay's struggle with his past and present runs parallel but is connected to the film's crime narrative and delivers an ending that is hauntingly sad. 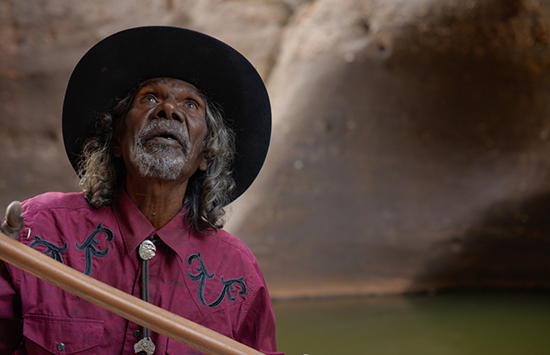 'I'm trying to get closer to starting to redefine what genre means,' Sen said in an interview with Guardian Australia in early June. 'Genre doesn't have to be this thing where we all know what it is and there is no mystery to it.'

Goldstone proves that Sen is well on the way to realising his vision. That he does not completely succeed in this film is partly the result of the way we define genre cinema, an ongoing debate in which Sen will doubtless be crucial. Goldstone deserves attention precisely because it tries to use genre as a platform for broader conversations, including, riskiest of all, engaging cinemagoers about some of the uncomfortable realities of race politics in Australia.

Goldstone, directed by Ivan Sen, is distributed in Australia by Transmission Films, and opens in selected cinemas on July 7.