In his introduction to the opening night concert of the Melbourne International Jazz Festival (MIJF), Michael Tortoni, the artistic director, noted that some 43,000 patrons were expected to attend over 120 concerts during this year's program. That is a lot of devotees to a musical form often marginalised, or perceived as difficult. Certainly, it is a sure sign of endorsement not just for contemporary jazz, but for this major Melbourne event, which has, in recent years, positioned itself as a key festival within the city's increasingly crowded arts calendar.

The theme of this year's Festival was the 'evolution' of jazz, a celebration of the ongoing dialogue between past icons and emerging figures. This intent was nowhere more evident than in the opening night concerts, one headlined by saxophone legend Gary Bartz, now in his sixth decade of music-making; the other featuring bass wunderkind Esperanza Spalding, with her project Emily's D+Evolution.

Gary Bartz's musical lineage touches upon many of the jazz greats of the past half-century, including Art Blakey, Miles Davis, McCoy Tyner, Max Roach, and Charles Mingus. For his concert at the Melbourne Recital Centre, Bartz and his Quartet delivered a single uninterrupted ninety-minute performance, the leader signalling sudden shifts in direction rather than relying on a conventional set list. The rhythm section, which included Australian pianist Barney McAll, responded in kind, shadowing Bartz's every move. This approach, of playing 'in the moment', made for a beautiful flow, the river-like quality of the music alluded to in Bartz's brief vocal chant 'I've Known Rivers', from his 1973 album of the same name. Although the concert was billed as a tribute to John Coltrane, there were no obvious Coltrane pieces played; instead, Bartz played in the spirit of Trane, drawing upon a lifetime's dedication to this music. 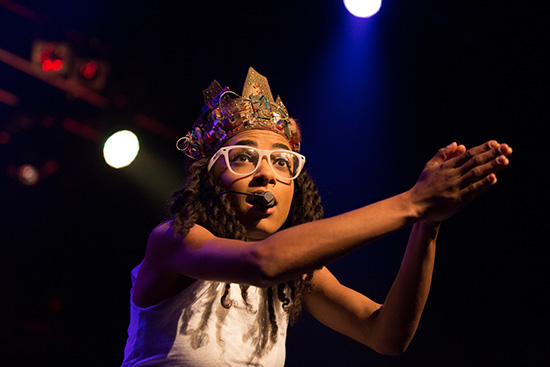 If anyone could be said to represent the eclecticism of contemporary jazz, it is perhaps pianist Robert Glasper. Aside from his long-running piano trio, he has worked with soul singers and hip-hop artists, recorded songs by Radiohead and John Legend, and won a Grammy in the R&B category for his first Black Radio album (2012). More recently, he produced the soundtrack to the new Don Cheadle film Miles Ahead (2015), and released Everything's Beautiful (2016), a re-imagining of the music of Miles Davis.

Glasper opened his MRC performance by acknowledging Muhammad Ali, whose death had broken in the media just a few hours earlier, before launching into a stripped-back version of Prince's 'Sign o' the Times'. Given his recent success in the R&B field, it was an unexpected treat to hear him perform in acoustic mode. Much of the concert was drawn from Glasper's 2015 Blue Note recording Covered, including Musiq Soulchild's 'So Beautiful' and Bilal's 'Levels'. The extended 'In Case You Forgot' saw Glasper comically sparring with drummer Damion Reid, as he teased the audience with snippets of songs by Cyndi Lauper, Billy Joel, Bonnie Raitt, and others, before collapsing the music into a chaotic jumble of free jazz notes. At times Glasper demonstrated a surprisingly delicate touch at the piano; other times he relished playing extended vamps and grooves that yielded ample space for drums and bass. That said, Glasper is clearly not going to be tied down to a single format. Working across multiple musical genres, he represents one direction jazz might be headed in the future. 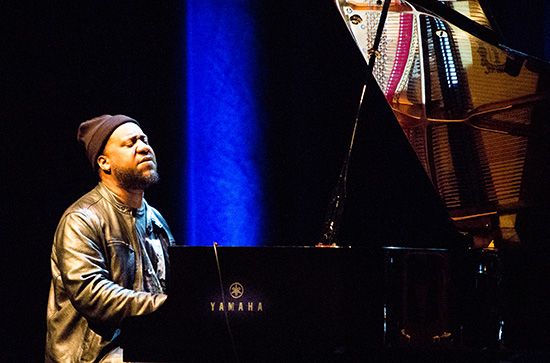 For the Miles Ahead soundtrack, Glasper drew upon the talents of saxophonist Marcus Strickland and trumpeter Keyon Harrold, both of whom made appearances at the Festival. I caught Harrold's set at Bennetts Lane on the Wednesday, playing with Strickland's band Twi-Life. It was an exciting, bravura performance, mixing classic small-group jazz with more electric and funk-driven music. The highlight came with a ferocious reading of Miles Davis 'Spanish Key' from his Bitches Brew (1970) album. It struck me what a rare opportunity it is to hear music from Miles's electric years performed live by musicians capable of doing it full justice.

While jazz may have begun life as an American art form, much of the innovation over recent decades has come from elsewhere. One of jazz's key strengths has been the way it has been able to absorb and embrace music from so many diverse cultures. This year's Festival program featured many artists, new and old, who have contributed to this development: Mulatu Astatke (Ethiopia), Eddie Palmieri (Puerto Rico), Paolo Angeli (Sardinia), Hiromi (Japan), Shai Maestro (Israel), and Lionel Loueke (Benin). Several of these artists performed with Australian ensembles, further blending the cultural mix.

One of the major progenitors of European jazz, Polish trumpeter Tomasz Stańko performed with two different but equally powerful line-ups. His Thursday evening concerts at the Merlyn Theatre featured his European quartet, a tight-knit unit that provided a fluid backdrop to Stańko's darting improvisations. The exploratory momentum of this music, forever probing, brought to mind Miles Davis's great Quintet recordings of the late 1960s, though there was nothing backward-looking about this music. On the Saturday evening, Stańko collaborated with the Monash Art Ensemble to perform the music of his late compatriot Krzysztof Komeda, best known for his scores for the films of Roman Polanski, including Knife in the Water (1962) and Rosemary's Baby (1968). The set was drawn from Stańko's atmospheric ECM album Litania (1997), newly arranged for the eighteen-piece ensemble by trombonist Jordan Murray. While the sheer scale of this ensemble occasionally overwhelmed the music, it was a mesmerising performance nonetheless, dark and brooding, and featuring standout solos by Paul Grabowsky, Rob Burke, and Paul Williamson. 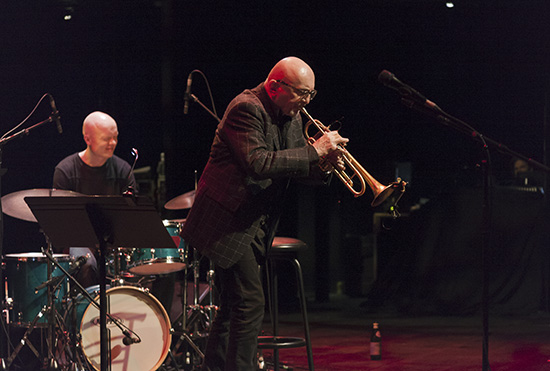 Some years back, there was debate about the paucity of Australian acts programmed during the MIJF. This issue has since thankfully been laid to rest, and this year's program boasted a plethora of home-grown talent, particularly as supports to international acts, and at the various Melbourne clubs: Bennetts Lane, Uptown Jazz Café, and Dizzy's Jazz Club. Andrea Keller's brief opening performance for Gary Bartz, featuring her latest trio project Transients IV, was startling in its originality. Paul Grabowsky led his trio in a tribute concert to mark the first anniversary of the death of his friend and colleague, drummer Allan Browne; while across town, at Uptown Jazz Café, the Allan Browne Quintet, led by trumpeter Eugene Ball, performed Browne's final album, Ithaca Bound, launched at last year's MIJF just twelve days before he died.

Peter Knight's long-running outfit Way Out West may have taken their name from a well-known Sonny Rollins album, but the phrase equally alludes to the fact that band members originally hailed from Melbourne's western suburbs. Intentionally reflecting that region's diversity, the ensemble draws sustenance from Asian and African rhythms, stretching their musical palette well beyond jazz's usual terrain. Way Out West's performance, timed to coincide with the release of their new self-titled album, demonstrated once again the uniqueness of this music, as ever enlivened by Satsuki Odamura's hypnotic koto playing, and Ray Pereira's rhythmic percussion.

The standout Australian performance this year, however, was undoubtedly pianist Stu Hunter's the migration, the third in his series of long-form suites to date. Scored for nine musicians and vocalist, the ninety-plus minute work was exhilarating in every way, mashing together the music of African townships, New Orleans jazz, Middle Eastern rhythms, Gypsy and Jewish melodies, and contemporary jazz, soul, and funk in a completely original manner. Performed by some of Australia's finest musicians – including Tina Harrod, Julien Wilson, Simon Barker, Phil Slater, James Greening, and Cameron Undy – the migration, despite its length, never for a moment lost focus. Impressively, it managed to be intricately and densely layered and danceable at the same time. Like Hunter's previous suite The Gathering (2009), the migration is a tour de force, as ambitious as any symphonic work, yet entirely within the jazz tradition.

This year's closing night concert was performed by the Wayne Shorter Quartet at Hamer Hall. Is there a musician who better exemplifies the 2016 Festival theme of the evolution of jazz? Despite his eighty-two years, Shorter remains a forward-looking musician who never trades on past triumphs. His recent music draws upon a lifetime's learning, from his classic Blue Note recordings, to his critical contributions to the music of Miles Davis, through to his pioneering explorations with Weather Report, and yet at the same time is utterly new. In the fifteen-year lifespan of his current Quartet, Shorter, pianist Danilo Pérez, bassist John Patitucci, and drummer Brian Blade have developed an on-stage telepathy that defies belief. The bulk of their performance comprised three extended pieces, mostly devoid of obvious themes, without clear beginning, middle or end. Here was a group of musicians performing at the peak of their powers, playing music possessed of an inbuilt elasticity, constantly expanding and contracting, shape-shifting. Shorter, always a team player, provided sharp bursts of tenor and soprano sax, adding sounds and colours to the music. And while the performance appeared entirely improvised, it was equally apparent that these compositions are as meticulously constructed as great architecture. 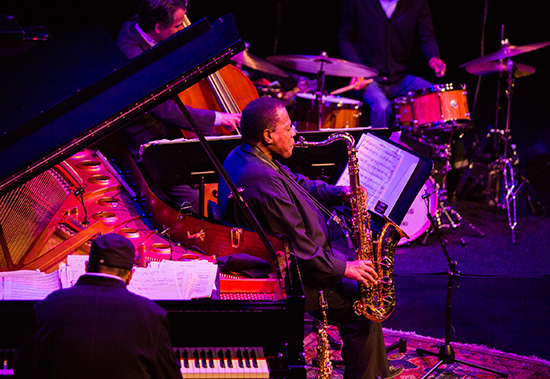 This year's Melbourne International Jazz Festival successfully traced the intricate patterns of relationships between elders and emergent musicians, between musical centres and the periphery, between jazz's past and future. In delivering one of the strongest programs in recent years, the Festival demonstrated the creative vitality of so much contemporary jazz, along with its endless capacity to engage in dialogue with other musical forms; and, in doing so, to evolve in new and exciting directions.

The Melbourne International Jazz Festival ran from June 3 to June 12 2016.