'If you are going to tell a story, come with some attitude, man'

After a ten-year gestation, actor Don Cheadle (Hotel Rwanda [2004], Crash [2004]) has realised his dream to produce a film on the legendary jazz musician Miles Davis. Cheadle who directs, co-writes, and plays the central role eschews the usual linear narrative in Miles Ahead and takes as his point of departure the five or so unproductive wilderness years of the late 1970s when Davis lives a hermit-like existence in his New York apartment, struggling with alcohol, drugs, an unexplained difficulty with his embouchure, and other health problems.

The embouchure, or posture of the lips, is as important to brass and woodwind players as vocal cords are to an opera singer. The implication in Miles Ahead is that Davis has a major problem with his. He spends much of the movie touching his mouth and occasionally putting to his lips a trumpet mouthpiece. Later, he announces that it 'hurts' to play. Did Davis have embouchure dystonia (not recognised as a medical condition in his day), an condition in which highly refined and over-learned lip movements become disorganised and can no longer be voluntarily controlled? Many professional musicians suffering from embouchure dystonia never regain control of their instruments. Davis, however, went on to have a second burst of creativity with a substantially changed style: the electric years.

In an almost syncopated way, the film keeps flashing back to the 1950s, and here we glimpse the highly productive influence of legendary figures like Bill Evans, whose collaboration with Davis gave us one of the greatest jazz albums of all time: Kind of Blue (1959). At the core of the film, though, is Davis's special relationship with his future wife and muse, Frances Taylor, beautifully played by Emayatzy Corinealdi. Eventually, his cantankerousness and abusiveness destroy the relationship. The remorse never really leaves him. 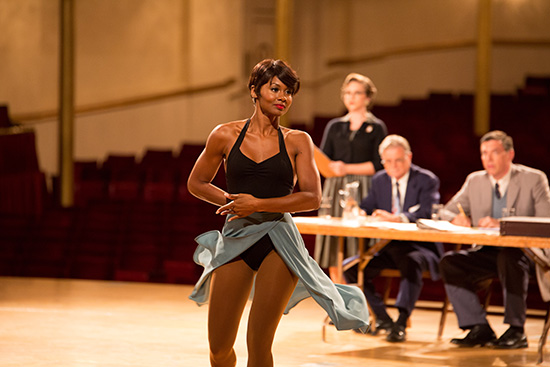 The movie is not a biopic in the traditional sense, but rather an attempt to convey both the chaos of the wilderness years and a broader sweep of the evolution of Davis's oeuvre. A fictional Rolling Stone reporter, Dave Brill, dutifully played by Ewan McGregor as Laurel to Davis's Hardy, gives the movie some driving narrative as an increasingly irascible Davis is caught up in a madcap plot to recover some of his stolen experimental recordings, which Davis alone knows are less than brilliant. At this point the movie digresses into gun-waving, car-chasing, gangster hyperbole that stretches the audience's credulity. Cheadle has said that he wanted the movie to be 'an experience' of Davis's life and music rather than an 'account'; in this sense, the car chases can be interpreted as imaginative Back Seat Betty jazz improvisations – cinematic ekphrasis, perhaps.

In the end, however, it is the glimpses of the creative process of the jazz sessions, the eloquence of his troubled relationship with Frances (the 'best wife I ever had'), and the depiction of the frustration and irritability of an artist in a mid-career funk which make this movie exceptional. From the first image of Davis wearing a gold, alligator-textured shirt, his eyes hidden behind saucer-sized sunglasses as he rasps out aphorisms interlaced with profane banter, we meet, possibly, a caricature of genius. To Cheadle's credit, acting superbly, he embodies both the cool, observant musician and the self-destructive, violent man.

Shades of blue suffuse the cinematography. The film's editing is remarkable. Scenes slide and crash abruptly in transition as Davis's memories from the 1950s and 1960s interpenetrate the 1970s. At times the cinematography resembles the blurred rewinding of a VHS tape. Cheadle has gathered together a talented group of filmmakers: photographer Roberto Schaefer (Quantum of Solace, [2008]), Oscar-winning sound editor Skip Lievsay (who has worked on several Coen brothers films including, No Country for Old Men [2007]), and Grammy Award-winning jazz/hip-hop composer Robert Glasper. Already a proficient sax alto player, Cheadle learned to play the trumpet for the role. This attention to detail gives Miles Ahead an authenticity that rewards repeated viewings. A particularly moving scene finds Davis and Gil Evans working patiently and quietly in the studio together, making late revisions to the score for Porgy & Bess (1959). Greatness, it seems, emerges magically from hard work and collaboration.

We never clearly understand the creative problem that stalled Davis's career in the 1970s. Overwork, failed love, drugs, and psychosis are all implicated. Metaphorically, as Davis strives to regain his stolen session tape he is also seeking his lost youth. He is brought back to hope when he sees a version of himself in Junior, a young trumpet player who has a perfect embouchure but not the wisdom of experience. 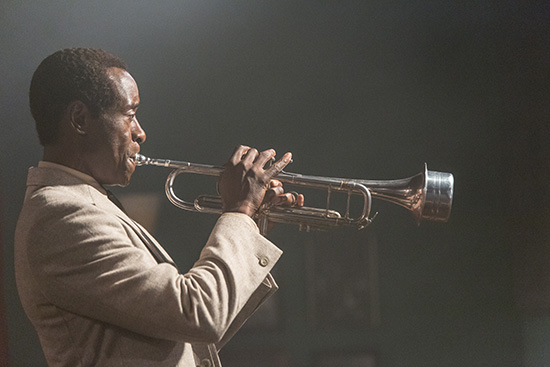 Finally, a group of magnificent musicians come together gratis to perform a fantasy concert. Old-time colleagues play alongside newer jazz artists: Herbie Hancock (aged seventy-six) on keyboard, Wayne Shorter (aged eighty-two) on saxophone, Robert Glasper on Rhodes piano, Keyon Harrold on trumpet playing behind Cheadle as Davis, Antonio Sanchez on drums, Esperanza Spalding on bass, and Gary Clark Junior on guitar. The song 'What's Wrong With That?' (a favourite saying of Miles's) is a new composition by Glasper and others. Davis's own neon abstract paintings dance kaleidoscopically behind the stage as the band celebrates the return of the king from exile. The triumph is social music. The triumph is reinvention.

Miles Ahead is directed by Don Cheadle and is distributed by Sony Pictures in Australia. It opens at Dendy Newtown in Sydney on 15 June and Cinema Nova in Melbourne on 16 June.