Queen of the Desert recreates the life and times of British colonial explorer, cartographer, writer, and eventually Foreign Office adviser, Gertrude Bell (Nicole Kidman), whose intimate knowledge of Bedouin culture played a key role in the re-mapping of the Middle East after the collapse of the Ottoman Empire in the early 1900s. As German auteur Werner Herzog's first feature in six years, and with Kidman in the title role, it promises an overdue excavation of the 'female Lawrence of Arabia' set against the waning of colonial powers in the Middle East in the early twentieth century, shimmering deserts and opulent Persian colonial outposts. Unfortunately, Queen of the Desert disappoints on all fronts: Bedouin culture is kept romantically at arms length, Britain's role in partitioning the Ottoman Empire is reduced to a comedy of manners, and Bell's fascination with the region remains opaque. Worst of all, her adventures are as plodding as a slow camel ride through the desert.

We learn in a prologue depicting the carving up of the region by various powerful men that Bell will be an exceptional woman. Those who resent her interloping in diplomatic affairs include conservative antagonist Colonel Mark Sykes (Nick Waring), who introduces her as a 'globe-trotting, rump-waggling, blathering ass'. We then meet Bell in her early twenties, wilful, albeit politely so. Fresh from Oxford, uninterested in marriage and society life, she paces around her parents' country mansion. Soon her father agrees to indulge her worldly ambitions and she is ushered off to Persia, where her uncle, Frank Lascelles (Mark Lewis Jones), is the British minister of Tehran.

Now that we are en route to see Bell become the pro-Arab diplomat and trailblazer she would become, Queen of the Desert undercuts its feminist history by sandwiching her remarkable travels between two episodes of heartbreak. In Persia, Bell falls for her minder, Henry Cadogan, played humourlessly and with a bad English accent by James Franco. Later in her career, she falls in spite of herself for married consul Charles Doughty-Wylie, played by a mercifully warmer Damian Lewis. Both relationships end in tears. In between, Bell's expeditions into uncharted territory and tribal politics find her in risky circumstances with Turkish military and nomadic warriors. But these sticky situations are repeatedly diffused by Bell's unique combination of gumption and poise, which enables her to slip effortlessly out of the grips of potential trouble; the most she suffers is a chinwag with a cosmopolitan sheik about Rimbaud and Baudelaire. 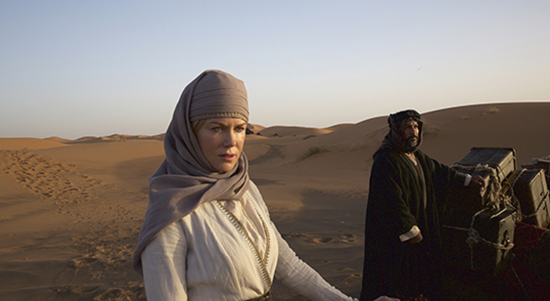 Nicole Kidman in Queen of the Desert (Transmission Films)

Herzog's concluding titles reiterate the film's fascination with Bell having never been married, which, though perhaps unusual for a women at that time, places startling explanatory emphasis on her romantic life as the defining clue to her journeys in the desert. Bell's travels become a retreat from grief, a journey to fill the void left by two dead lovers.

Second-rate gender politics don't necessarily disqualify a compelling yarn, but Kidman has no on-screen chemistry with Franco and only marginally more with Lewis. Indeed, it is one of Queen of the Desert's many ironies that an impassioned life spent in the heat of the desert here makes for an emotionless, passionless film.

The settings and performers are attractive. Herzog seems to be deliberately invoking the style of 1980s Anglophillic heritage cinema like A Passage to India (1984) or Out of Africa (1985). There is a visual rhetoric recalling the still-life painting, with figures often flanked by others, or sitting or standing just beyond doorways – as if literally framed. Rolling dolly shots showcase luscious imperial domiciles; stunning widescreen shots are moving postcards of the glittering desert. No stranger to crinolines, Kidman is as pretty as ever, at garden parties with heaving bosom, or on camelback, with silk rustling in desert winds. Despite the actor's signature poise, she has tedious dialogue to work through and the results are as insipid as her recent advertisement for Etihad airways.

Where more audiovisual restlessness might have suggested Bell's impatience and the unease of the region, heritage cinema is at its most languid. It is as if Merchant Ivory forged an expensive collaboration with The History Channel, but with less aristocratic wit, fumbled sex, or care for historical truthfulness. Herzog rewrote details of Bell's life – to no dramatic avail. So little is at stake that it's hard to believe the auteur of lunacy and rage made this dull, orientalist period romance. 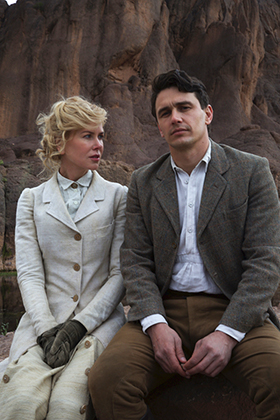 Between soporific patches, I wondered if it was perhaps one big extravagant genre parody? The Mills and Boon dialogue, the cursive credits, the melting score – all hint at the inadequacy of the historical melodrama to convey real lives and complex histories. Herzog has played far more elaborate tricks off-camera, like hypnotising an entire cast and very publicly eating his own shoe. But Queen of the Desert inhabits period convention utterly unironically, as if decades of feminist and post-colonial costume drama had never happened. Perhaps it is actually the foray into a woman's experience, a first for Herzog, that makes this film so vapid and condescending.

Queen of the Desert (M) directed by Werner Herzog, distributed in Australia by Transmission Films. In cinemas June 2.