If any contemporary Australian novel can be said to be canonical, or perhaps even 'the great Australian novel', then it must be Tim Winton's Cloudstreet. Published in 1991, it soon acquired a devoted following and elevated Winton into the top rank of Australian writers. Voted the most popular Australian novel in ABR's Favourite Australian Novel poll in 2009, it has won considerable critical acclaim, while also attracting controversy because of its putative avoidance of Aboriginal issues. On one level, though, the novel can be read as a meditation on the creation of the nation through dispossession and child removal. This is directly reflected in the haunting of the house by two figures: the moneyed widow who turned it into a home for Aboriginal girls; and the young girl who committed suicide there.

There have been two major adaptations of the novel: Nick Enright and Justin Mojo's stage version (1998), directed by Neil Armfield, which enjoyed considerable success in Australia and abroad; and the television version co-written by Winton and American writer Ellen Fontana (2011), and directed by Matthew Saville.

Cloudstreet being such a 'musical' novel, it is surprising that we have had to wait a quarter of a century for an operatic adaptation. Nor was it the first of Winton's books to be adapted for the lyric stage: that honour goes to the novel that immediately followed Cloudstreet – The Riders (1994) – adapted by Iain Grandage and Alison Croggon for Victorian Opera, first seen in Melbourne in 2014, and recently re-staged in Perth. Winton's fiction is suffused with music; The Riders has the iconic Irish song 'On Raglan Road' as an epitaph, and Grandage made much of this in his opera.

Composer–librettist George Palmer taps into some of the music of Cloudstreet. The opening of his opera incorporates the American hymn 'Shall we gather at the river?', whose melody serves as a form of leitmotiv. This is most appropriate, for Perth's Swan River plays a crucial role throughout. The beloved boy Samson (Fish) Lamb, brain-damaged after nearly drowning at the beginning of the novel, commits suicide in the same river as an adult. Thus the river frames the novel and the opera. 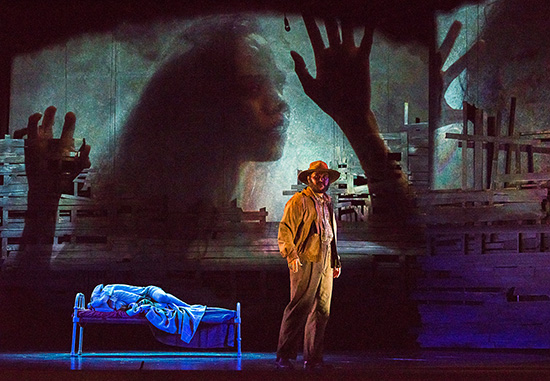 The novel combined elements of family epic and ghost story, but the opera significantly expands the latter element through the Three Spirit Girls; they function as the spirits of the novel's Aboriginal girls who figured in the prehistory of the house. Palmer expands what is a strong ghostly presence in the novel: Bob Crab, a mysterious Aboriginal figure, is portentous in the prologue: 'Wherever the river goes every living creature which swarms will live, and there will be many fish, for this river goes there, that the waters of the sea will become fresh – so everything will live where the river goes.' This character remains ambiguous in the novel, usually appearing when one of the main characters needs him or when there is significant 'family' business. The stage and television adaptations use him as well. But the opera places him centre-stage, thus altering the perspective of the original work. The figure stays hidden to all of the characters except Fish, who periodically converses with him. One of the criticisms of the novel was that a work suffused with voices silenced the peripheral indigenous characters. The opera inverts this, making Bob and the three girls, who function as a form of Greek Chorus, prominent in the musical texture, while eliding the old white widow.

Unusually for a contemporary composer, Palmer has filleted the novel to create his own libretto. This often leads to disaster, but he has retained much of the overall structure and narrative pulse of this sprawling novel, while identifying the moments that lend themselves to operatic expansion. The libretto is constructed from more than fifty scenes; they mostly flow without musical breaks, and there is a strong filmic element in the dramaturgy of the opera, cross-cutting from one event to another. This creates an almost breakneck sense of momentum. Nonetheless, there are several effective moments of operatic introspection and reflection.

Is Cloudstreet a musical or an opera? It is the sort of question that occupies many in the lyric theatre business these days. In overall terms, the musical texture and idiom are inclined towards musical theatre, but there are also many elements that are purely operatic. This opera is a musical hybrid, perhaps symptomatic of where the Australian genre is heading. Palmer's opera is never derivative, but it does tap into several contemporary operatic currents. Although the two operas are very different in subject matter, Cloudstreet is idiomatically reminiscent of Kate Miller Heidke's highly successful The Rabbits, the big operatic hit of 2015 (and newly available on CD from ABC Classics, a live recording from Sydney). In broader terms, one is reminded of composers such as Aaron Copland and Carlisle Floyd, and younger composers such as Jake Heggie, Mark Adamo, and André Previn, all of whom have embraced a more lyrical idiom as a reaction against postwar modernism. The musical treatment of the subject matter recalls Ricky Ian Gordon's version of The Grapes of Wrath (2007). In some of the upbeat numbers we hear echoes of Frank Loesser's Guys and Dolls (1950).

Whether opera or musical, Cloudstreet requires operatic voices to do justice to the music (the singers are amplified here). The vocal writing is demanding for the main characters; all of them need an extensive range as well as the ability to embody a soaring vocal line with substantial vocal tone. The uniformly excellent cast demonstrate an aesthetic increasingly apparent in the merging of opera and musical theatre. The consistent and effective use of the Australian vernacular lends itself to a flattening of vowels which results in a vocal delivery closer to musical theatre than the traditional rounder vowels of opera; it also produces more clarity in the diction. 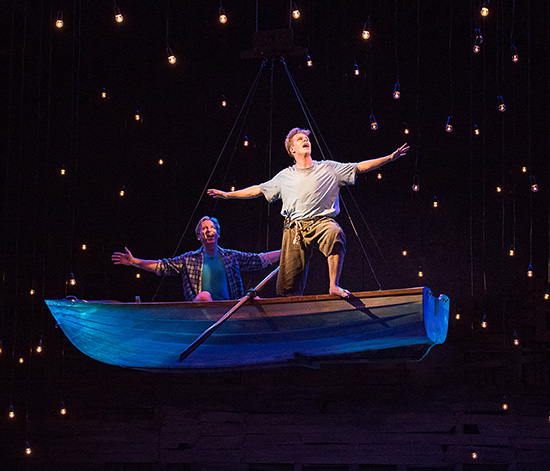 Cloudstreet, though an ensemble piece, is carried by the principal characters. At the forefront is Oriel Lamb, sung with burnished soprano tone by Antoinette Halloran. This is an inspired piece of casting. Halloran's glamorous voice and presence add depth to this fascinating and conflicted character. Her husband, Lester, together with Sam Pickles, typifies many of Winton's male characters who have strong feminine qualities but lack the agency of their womenfolk. Pelham Andrews as Lester, and that stalwart of contemporary Australian opera, Barry Ryan as Sam, offer nuanced and sympathetic portraits of these two flawed men; Ryan in particular, with his powerful baritone and impeccable diction, invests Sam with real sympathy and warmth. Joanna McWaters as Dolly Pickles brings a soaring tone to her finely crafted aria, 'Most nights I lie here wide awake', but also a voluptuous and brassy stage presence, undercut by vulnerability; her entrances are frequently accompanied by a bluesy sax.

The younger pair, Rose Pickles (Desiree Frahn) and Quick Lamb (Nicholas Cannon) provide the romantic heart of the work. Both have voices that can switch effortlessly from a musical idiom to an operatic one. Rose's transition from an anorexic teenager to a warm and sympathetic wife is impressive. Perhaps the most difficult character to embody is Fish, transformed from the 'beautiful boy' to the handicapped child and adult. Nicholas Jones is outstanding in the role. Conveying the naïveté of the boy and the man, he sings with a constricted vocal delivery when necessary, then magically allows the voice full bloom in the poetic and numinous scene in with 'flying' boat on the river. The younger members of the two families bring energy and verve to the many ensemble scenes. Don Benrose is a sonorous and commanding stage presence as the mysterious Bob Crab, while Jeremy Kleeman, with his suave baritone and lithe stage presence, is impressive as the narcissistic poet manqué, Toby Raven. 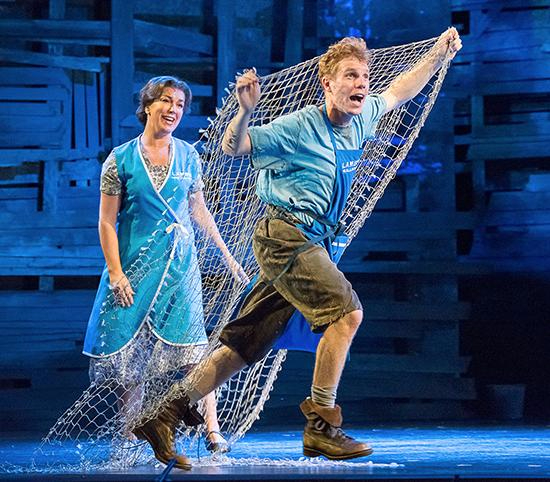 This production has been a labour of love for director Gale Edwards. Complemented by evocative sets by Victoria Lamb, vivid period costumes by Ailsa Paterson, atmospheric lighting by Nigel Levings, and effective use of projected video (Craig Williams), Edwards's direction sustains the energy and momentum throughout the three-hour performance. Imaginative use of the revolve facilitates the many scene changes, and Edwards's detailed character direction means that, as in the book, we develop much sympathy for these flawed but very human characters.

Like Gale Edwards, Timothy Sexton has contributed much to the development of the opera. He conducted with élan and control. The balance between pit and stage was outstanding – the sound designer Jane Rosetto must take much credit here.

Cloudstreet is not a perfect work: passages in Act Two could be rethought in terms of dramaturgical flow after the kaleidoscopic flow of events of Act One.

Finally, bouquets and bravos to the State Opera of South Australia for having the courage to gamble on a new opera. And it is always a gamble, artistically and financially. Cloudstreet should be picked up by other companies. Just as the play was a hit abroad, there is every chance that the opera would be well received overseas. It tells a quintessentially Australian story, one with undoubted universal appeal.

Cloudstreet, composed by George Palmer and directed by Gale Edwards for the State Opera of South Australia, continues at Her Majesty's Theatre, Adelaide until 21 May 2016. Performance attended: 12 May.