It is one of the most recognised symbols in the classical-record industry: German graphic designer Hans Domizlaff's crown of stylised tulips that constitutes the colophon (or logo, as we would now say) of Deutsche Grammophon Gesellschaft. Domizlaff sketched out the colophon in pencil on tracing paper in 1949.

By this time, DG was an already venerable recording company (it was founded in 1898), and remaking itself in the international market after the devastation of the war years. By 1949, the label was actually three separate concerns, each of them colour-coded: red for Polydor, with its brighter, more popular repertoire; silver for Archiv, with its more scholarly, mainly Baroque repertoire; and, of course, yellow for Deutsche Grammophon, with its rapidly burgeoning classical repertoire.

By the late 1940s, recording technology itself was just as swiftly changing. The 78 rpm record was spinning its way into history, and even the recently invented variable-groove 78 record, which doubled the playing time to a record-breaking nine minutes a side, were not enough to save it. By 1951, at the German Music Fair in Dusseldorf, DG displayed the microgroove record, the first in Germany. It came in two sizes – twenty-five and thirty centimetres, with respective fifteen and thirty-minute playing times – with the same rotational speed of 33⅓ rpm (45 rpm extended-play discs were also popular for shorter works). Herr Domizlaff's tulips performed a useful technical role, by being spread round the rim of the yellow label, acting as a stroboscope by which listeners could easily determine their turntables were running exactly at 33⅓.

Thus the long-playing record, or LP, which reigned supreme until the advent of the CD more than three decades later. Ah, the LP! These black, glossy, dinner-plate-size records, housed in their thin, square sleeves, were an essential part of the lives of music-lovers – and they were never, ever referred to as 'vinyl'.

DG's historic turning point was indeed revolutionary, not purely for technological advance but the wholesale development of an extraordinary catalogue of recordings whose quality and range are still, for the most part, unparalleled. Over a period of just nine years, and before the arrival of stereophonic sound, the label not only reinvented itself; it also utilised the talents of a host of conductors, orchestras, instrumentalists, and singers who collectively defined and consolidated European culture at a time it was most urgently needed. That DG thrives still, well into the age of MP3 and DVD, is largely due to these pioneers.

These, and other, performers, along with the legion of producers and creative planners behind the scenes at DG's Hanover headquarters – step forward, the legendary label head, Elsa Schiller – are justifiably celebrated in a new boxed set, Deutsche Grammophon Gesellschaft: The Mono Era, 1948–1957.

Fifty-one CDs are housed within a handsome cube, proudly bearing the Domizlaff colophon. The discs themselves reproduce the original sleeves – the early ones with a central vertical band of yellow bearing the composer's signature; and the later, more familiar, ones with the band running across the top, allowing for more imaginative artistic display beneath.

Mono was once a pejorative term, especially to those stereo-lovers who rejoiced in the novel experience of hearing a steam train chuff in one speaker and out the other and who regarded anything less as an aural imperfection. How wrong they were! With conductors such as Ferenc Fricsay, Karl Böhm, Wilhelm Furtwängler, Eugen Jochum, Igor Markevitch, Karel Ančerl, and the young Lorin Maazel; pianists such as Wilhelm Kempff, Sviatoslav Richter, Shura Cherkassky, and Clara Haskil; chamber ensembles such as the Amadeus Quartet and the Janáček Quartet; with singers such as Dietrich Fischer-Dieskau, Astrid Varnay, and Wolfgang Windgassen ... artistic quality beats mono sound hands down. 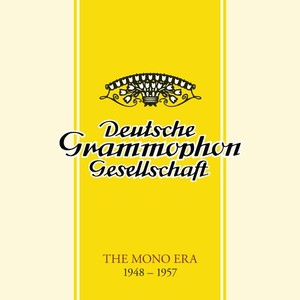 This is obvious from the first CD, of the Amadeus Quartet, vibrant and glorious in Schubert's G major and A minor, Rosamunde, quartets; the sound is warm, glowing, and heartfelt. Who cares about lack of separation or the occasionally wayward dynamic level when the performance is of such inestimable value? This for a recording produced sixty-four years ago.

Similarly, the deeply wrought account of Shostakovich's Symphony No. 10, with the Czech Philharmonic Orchestra conducted by Karel Ančerl, remains one of the finest interpretations on record. There's also Karl Böhm's radiant Brahms Symphony No.2, with the Berlin Philharmonic. This was, of course, the period of DGBK, or Deutsche Grammophon Before Karajan. The company's most prolific, and vain, maestro did not sign with the label until 1958, after defecting from EMI.

Two artists particularly associated with DG from the late 1940s were the great baritone Dietrich Fischer-Dieskau and the Hungarian conductor Ferenc Fricsay. How wonderful it is to hear the young F-D (he always looked the same, even in old age) in Brahms's Four Serious Songs and Schumann's Dichterliebe. Just as much of a revelation is Fricsay's immaculate performance of Mendelssohn's A Midsummer Night's Dream, with the peerless coloratura Rita Streich in the soprano part.

Elsewhere, other voices shine. For example, those sublime Wagnerians Astrid Varnay and Wolfgang Windgassen; the darker-than-dark bass Josef Greindl, whose Winterreise emerges from the very depth of his soul; and the 'house soprano' Maria Stader exemplary in Mozart and Schubert.

There are also more obscure performers, such as German pianist Elly Ney, whose fall from grace was understandable, considering she was reportedly Hitler's favourite pianist and that she habitually quoted the Führer from the concert platform as well as giving Beethoven's bust a Nazi salute. Fortunately, her disc of the composer's sonatas is restricted to the music only.

Many of these recordings are appearing for the first time on CD or on international release. In the latter category comes the first-ever opera recording by DG – a real curiosity piece, Zar und Zimmermann (The Tsar and the Carpenter), by Albert Lortzing. One might say Lortzing, like durians or Fernet Branca, is an acquired taste. But this folkloric tale of confused identity and political intrigue between two Peters (the Great, incognito; and the Lesser-Great, a lovelorn carpenter) in a German shipyard is a jolly and idiomatic, if highly improbable, piece of work. It helps greatly, having Gustav Neidlinger in the cast and Ferdinand Leitner on the podium.

Other unusual repertoire includes a sprinkling of works by Max Reger – a favourite in Germany, but never a favourite of mine – and, a far better proposition, Hindemith conducting some of his own pieces. There is also a disc of one of DG's bestsellers, the male-voice Don Cossack Choir, with its long-time conductor, Serge Jaroff, in a selection of jolly numbers, including Monotonously rings the little bell, The Imprisoned Cossacks and the Cuckoo, and The Legend of the Twelve Robbers.

A bonus CD reproduces the first two twenty-five centimetre LPs released by Polydor (the red label) in 1951. Das warn Zeiden! (Those were the Days!) and Troubadour der Liebe (Love's Troubadour) are typical of the schlock of the neu of the time. They enhance, rather than detract from, all that has gone before.

The Mono Era is not one of those sets to be regarded as a 'collectors' item', whatever that means. It is a vital and living document of classical music as it was mid-20th-century. Most of the performers are dead, but their legacies are as treasurable as they are profound.