Everything, it seems, depends on Juliet: for nothing can be ill, if she be well cast. And if she not be well cast? The question is an idle one, because in Kelly Paterniti we have an excellent Juliet. She is vibrant and original. Whatever faults this new Bell Shakespeare production may have, in her they are redeemed.

Even so, I might have wished it was not Romeo and Juliet. In the last two years, Bell Shakespeare has sent us As You Like It, Hamlet, and A Midsummer Night's Dream. Later this year we will get Othello. This seems like pretty unambitious fare. I am tempted to repeat what the English critic Max Beerbohm said of an almost identical programme more than a hundred years ago: much as I love these plays, I do not wish to see them again.

Basta, though. Cautious programming is no doubt a reflection of the current arts funding landscape. Romeo and Juliet it must be. And, yes, Paterniti redeems even this. All in all, director Peter Evans's production is compelling.

The war between the Montagues and the Capulets takes place amid the ruins of a small Italianate theatre. There's a proscenium arch on one side of the Fairfax Studio stage, hung with a thin curtain, pale as ashes. Next to that stand scarred and partially deconstructed stage boxes giving way to exposed scaffolding. It is, in short, a tomb-like world, suggesting commemoration and past violence. And yet, into this grey-on-grey Verona, the players enter wearing flamboyant pastiches of late sixteenth-century courtly gear. Anna Cordingley, who designed both set and costumes, provides stiff ruffs and lacy cuffs for all, but she exaggerates the richness of Juliet's wardrobe in particular. Gold is her theme, for, yes, Juliet is the sun, and all the drama moves around that shining centre.

Paterniti plays the tragic heroine as a girl agog, drinking life's passions in quick little gulps. It's a standout performance, mixing the rawness of adolescence – immediate and relatable – with echoes of ancient sadness. Perhaps the night's high point is the scene at the beginning of act four when Juliet, in a blazing orange-gold cloak, like love's adamant priestess, visits Friar Laurence in his cell. As the Friar, Hazem Shammas seems demonically inspired, flourishing the unlucky soporific as though it were a bottle imp. 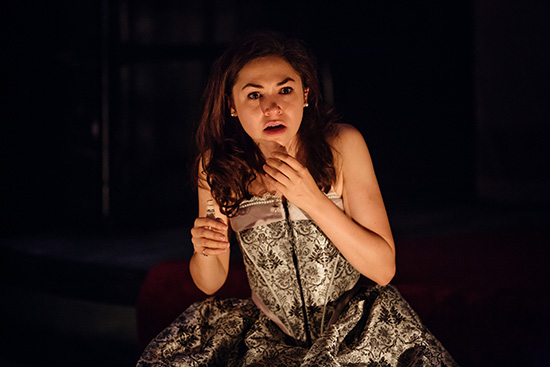 Justin Stewart Cotta is also impressive, domineering but not entirely heartless as old Capulet. And Damien Strouthos makes for an interesting Mercutio. Mercutio is one of those exuberant Shakespearean personalities who can swallow a play whole. He is not the protagonist, but he has more charisma. When, in Shakespeare in Love (1998), Ben Affleck's Ned Alleyn is assured that the title of the new play is Mercutio, we recognise this as an unrealised but never extinguished possibility. One way to tame him is to stress the erotic undertones of his friendship with Romeo, and to imply that his pricking commentaries on love owe more to jealousy of Rosaline than free-thinking cynicism. It is an idea that Strouthos pursues here with bawdy zeal: when he is stabbed by Tybalt, his indignation is like that of a failed wooer.

The swordplay in general is lively. For more than a decade now, Evans and company fight director Nigel Poulton have worked to develop a kind of manifest physicality in their Bell Shakespeare collaborations.And it is not only verismic brawling and monkeying around on scaffolds, though that does seem to be a major part of it. Here, as before, they also use brief freezes and slow motion effects to evoke a concentrated, ritualistic atmosphere at moments of crisis. This tension between stillness and action is, I think, more effective in this production, with its deep shadows and soft candlelight, than in anything Evans has done in Melbourne since Julius Caesar in 2011.

What I missed – and what I would argue has been missing in a number of Evans's recent productions for Bell Shakespeare – is a sense that his interest in the physical is matched by an equal interest in the verbal. Although there are some strong individual performances, the ensemble as a whole is at best inconsistent in its treatment of the verse. 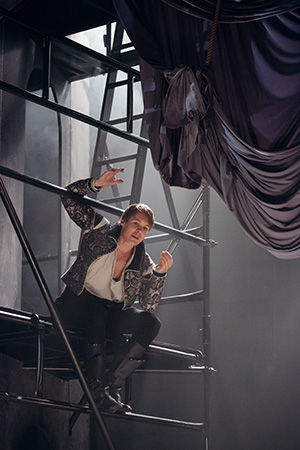 Michelle Doake, for instance, as the Nurse, crashes through her part like someone out of a lost Joe Orton comedy. Admittedly, there is much to enjoy in her broad impersonation of a raucous old gossip, but it seems badly out of key with what the rest of the cast is doing.

Fortunately, however, it is one of the quirks of this unique tragedy that you can more-or-less get away with a drippy Romeo.

Romeo and Juliet, written by William Shakespeare, directed by Peter Evans for Bell Shakespeare. The production continues in Melbourne until 1 May 2016. Performance attended: 15 April.