The speed with which Gaetano Donizetti wrote his operas almost defies belief, especially in our more leisurely age of composition. Don Pasquale (1843), as we know, was written in eleven days. When Donizetti, newly contracted to Teatro San Carlo, fetched up in Naples in May 1835, he had already written fifty operas. He was thirty-seven years old. Recent triumphs included Anna Bolena (1830), L'elisir d'amore (1832), and Lucrezia Borgia (1833).

This time, because of the intransigence of San Carlo, he had to hold his horses. The libretto was not forthcoming until July. Six weeks later, Lucia di Lammermoor was finished. The première at San Carlo on 26 September 1837 was another success for the composer from Bergamo. Tacchinardi Persiani was Lucia; Gilbert-Louis Duprez, inventor of the chestful high C, Edgardo. Donizetti wrote excitedly to Ricordi, his publisher: 'Lucia ... allow me amicably to be immodest and tell the truth ... pleased the audience, and pleased it very much, if I am to believe in the applause and in the compliments I received ... Every number was listened to in religious silence then hailed with spontaneous cheers.'

Donizetti never apologised for his native celerity. Pressure suited him, and he knew it. 'You know what my motto is? Quickly! It may be reprehensible, but the good things I've written were always written quickly: and often the accusation of carelessness is made against the music that cost me most time.'

The (belated) librettist, in this occasion, was Salvatore Cammarano. It was their first collaboration; seven more operas would follow. Cammarano later worked with Verdi: Luisa Miller (1849), recently performed in Sydney to much acclaim, and soon to be repeated in Melbourne (with the sensational Nicole Car in the title role), was their third opera together. The Lucia libretto is a famous invention: brisk, cogent, telling. Cammarano adapts Sir Walter Scott's novel The Bride of Lammermoor (1819), which was based on a true story from the seventeenth century. The librettist, sensing the opportunity for another fashionable mad scene, transplants the cowering, historical Jane Dalrymple from the conjugal bedroom to the wedding banquet. Obliging directors from Franco Zeffirelli on have splattered her with blood, to ram home the point. (Here there was so much gore it was hard to see the virgin nightie.)

The Donizetti moment shows no sign of abating. Long gone is the age – century really – when Lucia was practically the only Donizetti opera (he wrote sixty-seven in all before going insane at the age of forty-seven) that was frequently performed. Nowadays at least a dozen are in the operatic repertoire. The Metropolitan Opera, in its current season, is offering at least five of them, including the three Tudor Queens – Anna Bolena, Maria Stuarda (1834), and Roberto Devereux (1835) – all sung (in a rare feat) by the American soprano Sondra Radvanovsky (to great effect, judging by the recent Met broadcast of Anna Bolena). Last year, Arts Update was at the Glyndebourne Festival, which opened with Donizetti's embattled Roman opera Poliuto (1848, after many vicissitudes) – the first time it had been seen in Britain, but not a ringing success in Mariame Clément's lugubrious production.

Lucia, of course, has been a staple since Joan Sutherland reintroduced it to Australians. Half a century has passed since those legendary performances around Australia during the Sutherland–Williamson tour. One veteran told Arts Update that there were fewer T-shirts in the foyer at Her Majesty's on 10 July 1965 – the Melbourne première. Sutherland repeated it here in 1980, at the Palais; a further Sydney season followed in 1986. Of the recent Australian Lucys, Emma Matthews is the most notable.

Charles Osborne, noting the opera's longevity, has written: 'Lucia di Lammermoor, by far the finest and most successful of Donizetti's serious operas, is the epitome of the bel canto style and is unlikely to go out of favour with audiences as long as there are dramatic coloratora sopranos with the technique, agility and range to surmount the difficulties of Lucia's celebrated mad scene.'

Jessica Pratt's return to the company was much anticipated, especially after her magnificent Elvira in last year's concert version of I Puritani. Previously, Pratt has only sung here in one full production (La Traviata, 2014). Pratt, though only thirty-six, has already sung in umpteen productions of Lucia. Like Melba and Sutherland, she has performed it at La Scala.

Cameron Menzies' production is faithful to the story and sturdily old-fashioned. Would it have looked very different on 10 July 1965, Arts Update wondered. There is a fountain, there are lengths of tartan, and there is a grand curved staircase (up and down which Pratt, unlike the stricken Sutherland, chooses not to run). Smoke billows, moodily. We have a skull and a rubied goblet. The costumes and wigs, not always flattering, announce that we are in Scotland in the seventeenth century. 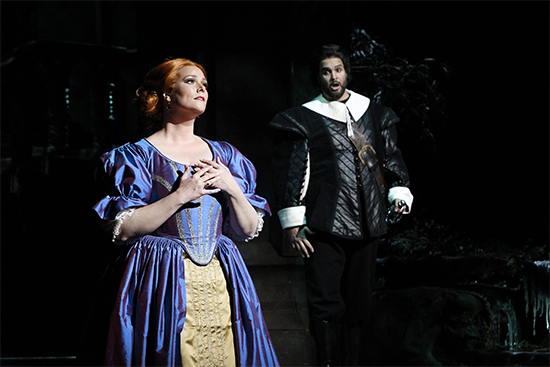 All night the direction seems wanting. Between the principals there is little rapport, especially during Lucia and Edgardo's duet in the second scene of Act I. Even natural singing actors like José Carbó (as the nefarious brother, Enrico) seem rather at sea. The mad scene is absorbing, but not as memorable or unsettling as it should be. Lucia plays with her veil and knife – but not the madness itself. The wedding guests, strangely placid, don't recoil from the rambling Lucia, covered in gore. No one thinks to grab her knife. When, mad scene over, Lucia approaches Enrico, weapon raised, he hardly reacts.

Pratt's singing on opening night did not rival her form in last year's Bellini. Some of the high notes seemed effortful and mannered, à la Edita Gruberová: they interrupted the drama, drew to attention to themselves. Things improved during the duet that followed her opening aria – the magnificent scena culminating in Verranno a te – though the tenor chose to cap it with a high note that defied classification – one with a will of its own. Pratt's ensuing duet with her brother was a highlight (these two duets are among the best things Donizetti wrote). Carbó – Pratt's Germont père in 2014 – brought his fine Verdian baritone and exemplary diction to this unpleasant role, and was vocally impressive. The wedding scene was suitably tense, as Lucy is deceived into marrying Arturo (foppishly played by the welcomely extrovert Michael Petrucelli), and the famous sextet upon Edgardo's discovery of his usurpation was beautifully shaped and sung.

The acoustic at Her Majesty's is not warm; even in row F in the stalls there was a lack of fullness or amplitude in the voices. Arts Update wonders how clearly the singers can hear one another and the band on that stage.

Still, Donizetti animates and melodises all his characters, however minor. Shakira Tsindos was a striking Alisa. Jud Arthur, as Lucia's chaplain, Raimondo, was heard at his best, and looked the part.

The orchestra, conducted by Richard Mills, played beautifully. The harpwork before Lucia's Regnava del silenzio was exceptional, as were the horns. In the coup de théâtre of the evening, Mills honoured Donizetti's original, abandoned intention to use a glass harmonica (Benjamin Franklin's invention) in the mad scene, not the accommodating flute. This unearthly sound suited Lucia's fragility, which is always underscored by the orchestration that accompanies her. None of the coloratura in this long, famous, exacting aria bothered Jessica Pratt; nor did the closing cabaletta, Spargi d'amaro pianto.

Young Colombian tenor Carlos E. Bárcenas – not an instinctive actor, it must be said –was nonetheless a fine Edgardo, despite the role's difficult tessitura. Bárcenas's diction was clear, the high notes generally accurate. Edgardo – naturally jealous and suspicious, vengeful as the next Italian tenor – is not a sympathetic character, but Bárcenas impressed. 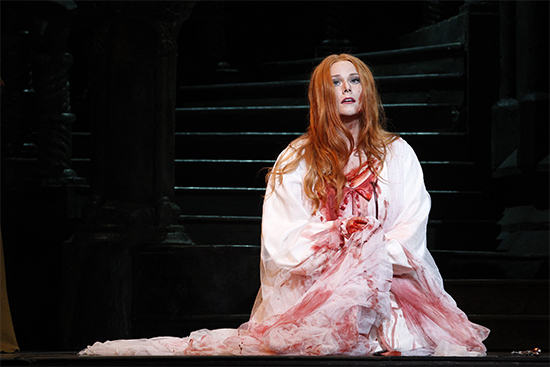 For many listeners, the drama effectively ends with Lucia's collapse. Indeed, the long ovations that often follow the mad scene can make the third scene of Act II seem anti-climactic. But there is nothing otiose about this concluding and highly neurotic scene in which Edgar, morose in the tombs of Ravenswood, warns Lucia that she should on no account walk his way with her groom, only to kill himself when he learns of Lucia's demise. Edgardo's two arias, Fra poco a me ricovero and Tu che a Dio spiegusti l'ali, are among the finest things in this exceptional opera, especially the latter (which, according to legend, Joan Sutherland once sang at a party). Bárcenas gamely interpolated a high C in Tu che a Dio spiegusti l'ali.

The chorus was consistently good, notably in the ashen chorus that precedes the mad scene, which was taken slowly, full of feeling, without bombast – true to the spirit of bel canto.

Lupinists will miss the Wolf's Crag scene, which was savagely cut.

Last week Arts Update was in Sydney for the new production of Giacomo Puccini's final opera, Turandot – the fifth opera in the Handa Opera on Sydney Harbour series. What a phenomenon this series is: the current production will be performed twenty-seven times before it closes on 24 April, while the main company goes on presenting operas in the Opera House. Even on an overcast night, rain threatening, it was an amazing experience to sit there watching opera, with the mighty bridge beyond. The grandstand wasn't full, but it was a decent-sized audience, involved and appreciative.

Happily, Chen Shi-Zheng's production is a decided improvement on last year's meretricious Aida. The sound (oppressive in 2015) is noticeably better. Even outdoors, the principals retained their individual timbres, and the many choruses came through undistorted.

The set on the raked stage is much more coherent than last year's camp fright. On the left, a dragon twice breathed fire. At the rear of the stage looms a high pagoda – redoubt of Princess Turandot, always enraged by the rape and murder of an ancient ancestress – and with a seeming horror of sex. Turandot's entrances are spectacular, the gradual descents more precarious as the lowered staircase shudders like an old Paris lift. 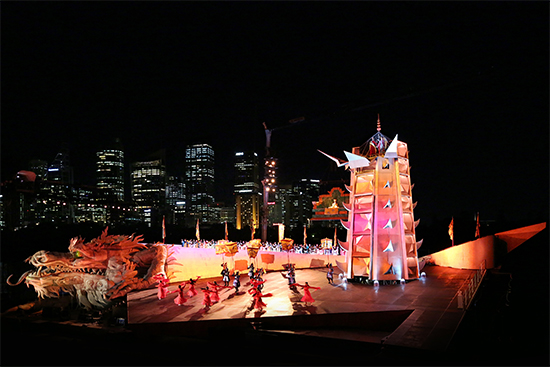 Handa Operas require alternative casts. This one featured three fine principals, all worth hearing. The chorus, which has much work to do, sang well; the lunar chorus in Act 1 was especially good. Serbian soprano Dragana Radakovic – a seasoned Abigaille, Tosca, and Aida – survived the hellish music that Puccini gives Turandot. In questa reggia and the massive singing that follows, as Turandot resists and taunts and gradually succumbs to Calaf, were accurate and powerful, and Radakovic was suitably imposing and flamboyant. Riccardo Massi – heard here in La forza del destino in 2013, as Radames at the Met the year previous – was an impassioned Calaf. Nessun dorma was ringingly sung. (Followed the obligatory fireworks.) It will be good to hear Massi as Rodolfo in Luisa Miller next month. Liù, the slave girl, has some of the most beautiful music Puccini ever wrote. Hyeseoung Kwon was convincing in this small but affecting role: Signor, ascolta was a highlight of the night.

Turandot, with its remote characters and fanciful scenario, is not everyone's favourite opera, but Puccini wrote some of his finest tunes for it, and the orchestration as ever is incomparable.