Gentles, perchance you'll wonder at this show
That comes to us with fanfare from abroad.
Mike Bartlett's many earlier plays, like Cock,
Gave us no indication he would write
A drama in blank verse about a king
That's yet to be. It could perhaps have been
A heavy-handed satire like Macbird
The sixties Barbara Garson play in which
Mad LBJ dispatches JFK,
Or else a sprightly Spitting Image sketch.
But author Bartlett has much more to say.
He's given us a deeper work in which
He boldly questions what's a monarch for?

God save the king. OK, but God save whom?
Some ceremonial cypher bred to reign
Or someone who embodies in himself
The curbs and freedoms of the land he rules.

The Queen is dead. At last it's time for Charles
To claim the role he's trained for all his life.
The fledgling monarch takes possession and
Invites his first prime minister to tea.
'Shall I be mother?' asks the novice king.
But mother's gone, the world's moved on and he
Must fashion his own way to wear the crown.

His moment comes when he is asked to sign
A bill curtailing freedom of the press.
Unlikely as it is, the lampooned man,
Whose tampon musings were replayed with glee
And published to much sniggering delight,
Stands with the journalists and will not sign.
The crisis that this causes fuels the play,
Windsors and politicians scheme and plot
As the once-vacillating Charles stands firm
While through it all a weird familiar ghost
Drifts by with strange ambiguous remarks. 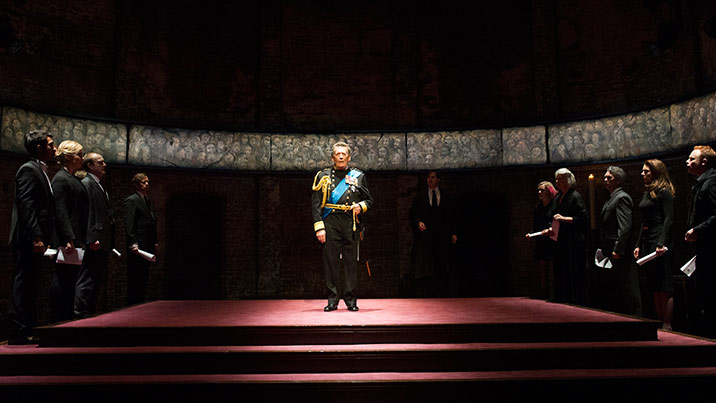 Another ghost, Will Shakespeare, haunts the play.
Charles is part brooding Hamlet part King Lear
Whose one rash choice caused chaos and alarm.
The forceful Catherine channels Lady M.
And overrides her Will to get her way.
While ginger Harry, like his namesake Hal,
Is torn between his royal duties and
A life of freedom with the common herd.

The opposition's leader backs the king
(Then scurvy politician that he is
Takes back his words when this no longer suits.)
'If you sign the bill.
For surely that requirement remains
Your choice, that is the power that you possess.
... I think this strikes
The heart of why we have a queen or king.
They are the check and balance of our land.
I've long believed that we could never see
A Nazi Party making British laws
Because the reigning monarch then would stand
His ground and being Head of State refuse
To sign, refuse to let the country lose
Democracy, and doing so provoke
Revolt.'

And later, in a scene that's writ in prose,
A kebab vendor makes a mystic case:

'You know since [the Queen] died. World's gone mad I swear. Every night people have this look ... they're terrified ... They don't know where they live. They don't know what Britain is anymore ... Slice by slice. Britain's less and less ... Smaller all the time and when does Britain get so cut down that it's not Britain anymore ... Well the Queen's dead. If you take enough layers away what have you got left, underneath, know what I mean? Maybe she was what held it together.'

Much of the humour in the play occurs
When pompous iambs clash with modern life
And tongue-tied royals whom we think we know
Soliloquise in grand pentameter
Like tragic heroes of the distant past.

Director Rupert Goold's production moves
At rapid pace through many scenes and he
Presents the ceremonial moments well.
But clumsy staging muffles the effect
Of one essential and important scene.

The cast is something of a curate's egg
The Princes score. Ben Righton shines as Will
A decent, conscientious man who's torn
Twixt stubborn father and ambitious wife.
While Richard Glaves careers around as Hal
A headstrong puppy straining at the leash.
As Jess, young Harry's vital, forthright squeeze,
Lucy Phelps shows us why the prince is charmed.
Carolyn Pickles also scores when she
Takes on Camilla's aptly thankless role.
But Jennifer Bryden's underwhelming Kate
Misses the lady's sweetness and her steel
And Robert Powell's Charles is a black hole
Which sucks the energy out of the piece.
The over-parted Powell rants and barks
But does not have the tragic stature which
Charles must show to galvanise the play.

But though not every element takes wing
In this production, Bartlett's play's the thing.

King Charles III, written by Mike Bartlett and directed by Rupert Goold, is presented by the Sydney Theatre Company. The production continues at the Roslyn Packer Theatre until 30 April 2016. Performance attended: 2 April 2016