The two high-profile theatre productions featured at this year's Adelaide Festival – the National Theatre of Scotland's imaginative and engaging account of the life and times of the three King Jameses, The James Plays Trilogy (★★★★), and Romeo Castellucci's mostly impenetrable take on, supposedly, some aspects of the life of Moses, Go Down Moses (0 stars) – could not have been more different in their dramaturgy or the treatment of the relationship between stage and audience.

In some respects, director Laurie Sansom and playwright Rona Munro's approach to presenting an interlocking series of unfamiliar historical incidents and scenes in three plays, ranging over a period of almost one hundred years, might be considered conventional: they use an established dramaturgy, which, while owing something to the writer's experience in television drama (Doctor Who, Casualty, Bumping the Odds), also honours the theatre's approach to a narrative of political sweep and personal intensity. But the staging is throughout a model of clarity, intensity, colour, and, yes, dramatic urgency.

A few years back, the same company brought their astonishing Blackwatch to the Sydney Festival, and many of the techniques familiar from that unforgettable production are deployed here to similar effect: brilliantly choreographed fight scenes; effective use of musical interludes and songs; sudden shifts from intimate, intense scenes to large-scale exchanges of viewpoints and the give and take of arguments set on more public platforms; imaginative, beautifully gauged lighting design along with strong and never over-elaborate stage design that really does merit the term scenography; and, at the centre of it all, a focus on the actor's presence and command of space.

I feel fairly certain that I would not have been the only member of the audience to whom the names James I, II, and III of Scotland, and their connection to English kings and the wider political issues of the fourteenth and fifteenth centuries, were entirely unfamiliar. But the plays, which could so easily have slid into formulaic history lessons interleaved with high-profile moments of personal drama, managed the balance of instruction and entertainment effortlessly. If at times, as in the latter sections of James III, it felt as if the domestic, intra-personal elements were pushing the larger issues into the wings, and we were marking time before the next public event, this is a minor objection, given the scale and ambition of the undertaking.

Some might also object to Rona Munro's choice of a completely contemporary idiom for telling the stories: but sooner that, surely, than any attempt at a cod-Shakespearian, self-consciously poetic and theatrical language, which would obscure the narrative and bog down the actors. The directness of the dialogue and, when called for, its toughness and forcefulness, is the linguistic equivalent of the strength and imposing directness of the stage design. Dominated by a huge sword looming stage left, and bounded by a half-circle amphitheatre behind, which offers catwalks, stairs, different levels, a set of doors which can open and crash down as a large drawbridge, a towering flight of steps leading up to a throne, two vomitoria-type entrances, and limited seating for some audience members, this stage space is an essential element of the three plays' dramaturgy.

But spaces do not just a theatre make: and especially in this case, the cast of twenty, playing a huge variety of roles, offer a startling range of characterisations. From Rosemary Boyle's carefully and deftly shaped depiction of the very young Joan's journey from English noblewoman to the more complex figure who becomes the wife of James I; through Steven Miller's perfectly pitched approach to the psychology of the James I who, after eighteen years in English captivity, emerges into a world he has not even begun to imagine; Blythe Duff's expertly differentiated portraits of two remarkable women – Isabella Stewart and Annabella, James III's aunt; and Andrew Rothney's trio of entirely unrelated characters – Walter Stewart, James II and Cochrane; the entire ensemble demonstrate a versatility and flexibility which are crucial to this type of theatre. 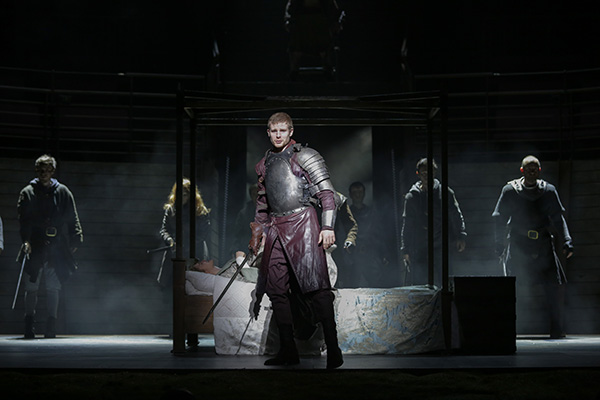 I suppose the smaller ensemble of Romeo Castellucci's Go Down Moses were also required to offer versatility, given that the characters appear to range from a collection of modern-day tourists or random figures on a street, past police officers, and social workers before mutating into what I think were naked savages (the lighting was so murky it was hard to be sure). The one thing they weren't asked to do by either director or 'text' was to offer anything approximating to meaning.

In forty years of Adelaide Festival theatre offerings, I had always thought that Jan Fabre's indulgent exercise in brutalising both his cast and the audience – the climax of his The Power of Theatrical Madness (1986) offered the uplifting, endlessly repeated image of naked women trying to climb back onto the Playhouse stage from which they had been brutally ejected by their male colleagues, while the males recited the date of the opening of the Bayreuth Festival Theatre – represented a nadir of theatrical meaninglessness. Romeo Castellucci's version of something apparently connected to Moses leaves Jan Fabre for dead.

An actor colleague has a remarkably evocative image to sum up theatrical experiences that might profitably have been avoided: 'I had rather given birth to a chair in the woods.' Well, Go Down Moses is actually a two-chair experience. It begins harmlessly enough, with a group of eight performers moving round a milkily lit, elongated rectangular stage box, separated from the audience by a tautly hung scrim. (After five minutes of the ensemble's wandering, I did seek to focus my mind by trying to work out whether it might have actually been a vast sheet of particularly flexible and light perspex: but, given the use to which is put later in the production, no.)

This wandering, accosting, moving on, stopping, is all reminiscent of Pina Bausch, though without an ounce of her precision and grace. But inoffensive, though pointless. However, I did keep wondering why, at times, some of the strollers kept stopping and apparently measuring others for something (Dior? Satin bomber jackets, or some latest vogue outfit?). More of which later...

But nothing from the muted, detached images of the opening could have prepared the viewer for what came next. A scene set in a high, enclosed, stark, and brightly lit space, prominently featuring a toilet, where a woman is spread across the floor, noisily and endlessly giving birth, while at the same time coming close to exhausting Adelaide's stocks of stage blood. I can only assume the outcome was meant to be Moses, but the irreverent thought did cross my mind that, back in Egypt, childbirth might have been not quite so interminably messy. And at least the Nile would have been close by. After some hours (well, minutes) of this, I began taking bets with myself as to what the next scene might offer: a deserted industrial wasteland? A hospital morgue or dilapidated waiting room with lots of dustbins? A social worker's office?

I was sort of close: it was actually a stage deserted (but for a large industrial waste dumpster, packed to the brim, and featuring as a piece of ingenious performance art a large black plastic bag in which something was moving. (No prizes for wondering whether it might be Moses.) I must confess I got the next two scenes wrong as well: the first was a police inspector's office with the unfortunate mother from the toilet being interrogated about her problematic parental abilities (I'm pretty sure there was, however, a female social worker flitting in and out); the second was an antiseptic hospital space, with a large cat scan machine, into which the mother is inserted, to the accompaniment of more noise than I have ever heard inside said machines, of which I have, alas, some experience.

I could never have predicted the following and final scene: a dimly lit, towering cave occupying about half the stage space,and featuring a cast of figures and a scenario which, I think, may have been a mash-up of that overlooked cinematic masterpiece One Million Years BC, and two or three instalments from the Planet of The Apes franchise. What this had to do with Moses unfortunately escaped me, more or less round the time that one of the 'noble savage' females looked to be either barbecuing or about to casserole a newly born figure which could have been another Moses, while bearing a passing resemblance to that scary little figure from Alien. 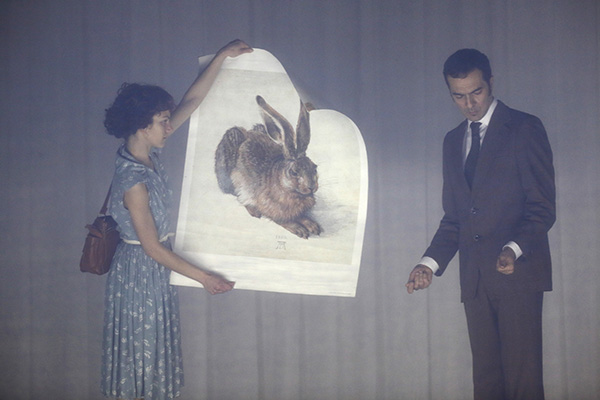 I also have to confess that I could not actually give my undivided attention to the stage action for the last twenty-five hours (sorry, minutes) as I was forced to keep both fingers in my ears to shut out the industrial music soundtrack that invaded the auditorium. I've heard of white sound, and its offshoots: this was blood-red, ears-bleeding sound, the like of which I have never heard either in a theatre or at rock concerts, standing next to the speakers. (I have also attended theatre productions elsewhere where ear plugs are offered to the audience: no such luck here, where one was assaulted by a sound worse than standing next to a pair of jet engines.)

There is theatre of the absurd, theatre of cruelty, epic theatre, etc., etc. This was EP theatre: theatre of excruciating pretentiousness (what on earth poor Albrecht Dürer's rabbit had to do with anything on view escaped me completely). And my own retrospective gloss on the opening's measuring activities came up with: winding shrouds. As for the title? If Castellucci is intent on using an American spiritual for his title, might I suggest an alternative? – Massa Drama's In De Cold, Cold Ground.