As a not-quite-indefatigable cultural itinerant, my memories of Perth are all of festival time. Usually, my arrival is the signal for the temperature to leap into the mid-forties, imbuing the experience with a patina of sweat and a dose of climatic paranoia. PIAF 2016, artistic director Wendy Martin's first festival, was merciful: I flew in just as a record-breaking heatwave came to an end.

In other ways, expectations of hotness were fully realised. Martin has curated a fascinating program, creating, as all good festival programs do, vibrant and provoking resonances. The opening weekend offered dichotomies between the divine and the human, epic spectacle and intimate personal connection, often in the same show. Aptly for the timbre of the times, the program has a subtext of subversion, which feels increasingly at odds with Chevron's sponsor banners that adorn the city streets. But this jarring is also, perhaps, apt for our times.

The big ticket on the opening weekend was William Kentridge and Philip Miller's opera Refuse the Hour, a companion piece to the installation The Refusal of Time, which Perth hosted in 2014. It is sometimes said slightingly of Kentridge's work that it is 'theatrical', which seems in visual arts circles to be code for 'shallow spectacle'. It is a fair observation, sans the pejorative: his work is theatrical. And it seems to me that theatre exposes something essential about Kentridge's work: his ambivalent embrace of the ephemeral and temporal, seen most hauntingly in his charcoal animations, is thrown into relief in the living breath of three dimensions.

Refuse the Hour is an unclassifiable work, part installation, part opera, part essay, mostly sheer delight. It opens with a dramatic solo from a drum machine high in the flies, and then Kentridge himself steps forward, holding a large book, and tells us a story: a memory of being told the tale of Perseus and his grandfather Acrisius, King of Argos, at eight years old. In the myth, the oracle's prophecy that Perseus would kill Acrisius is fulfilled by a cruel chance, brought about by his grandfather's attempt to flee his fate. 'No!' says Kentridge's eight-year-old self. 'No, no, no!' Why was Acrisius sitting in that chair, at that time, just as the discus thrown by Perseus flew through the air? Why couldn't it have been another chair? Another time? Another discus?

This instinctive rebellion is the seed of the show, which becomes an argument against time itself, weaving together Einstein's theories (Peter Galison, Professor of History and Science at Harvard, provided the dramaturgy) and the human history of colonisation. Kentridge plays with the idea that we are constantly projected into space, as images of light: if we could travel 3,000 light years away, perhaps we could see Perseus killing his grandfather. And as well as machines projecting ourselves, he says, we are also receptors, constantly receiving signals. 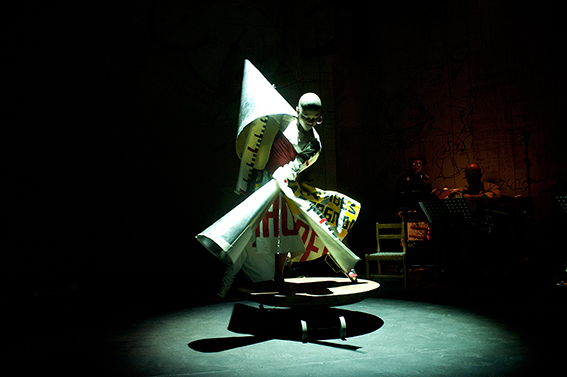 Time, Kentridge argues, is a human invention. In the sequence called Give Us Back Our Sun!, a celebration of the various African rebellions against colonial rule, he presents universal Greenwich time as an invention of imperial finance that steals the zenith of noon from its proper places. If we invented time, Kentridge implies, we can also uninvent it.

'Aptly for the timbre of the times, the program has a subtext of subversion'

Between these short, intimate meditations are eruptions of song, music, dance, Kentridge's clockwork machines, video projections. Miller's score is anarchically joyous, rich with brass and percussion, combining African rhythms and vocals with extracts from, say, Berlioz, in a mimesis of the energies of colonialism. We first see the extraordinary soprano Ann Masina spot-lit in the first row of the dress circle, singing Le spectre de la rose, with Joanna Dudley in counterpoint, vocalising the words backwards.

For all his status as maestro, Kentridge is a curiously modest figure on the stage. He opens space for all his collaborators to bring their various musical and performance energies to the foreground. In the centre is dancer Dada Masilo, a slender, impish presence whose movement has a charismatic precision. She flickers between the stage and the video projections, perching to watch herself, a mischievous Ariel to Kentridge's Prospero, an alter ego who leaps out and takes over the stage.

In tandem with the performances, Kentridge's surrealist nineteenth-century machines – mutated oil pumps, metronomes, loudhailers – and his videos (edited by Catherine Meyburgh) produce an overload of sensory stimulus which, for all its cacophony, seems never less than poised and elegant. Beneath the show is a molten core of anger and defiance, but it is realised with a lightness, humour, and play that makes the whole irresistible and exhilarating. It is impossible to capture every shade of meaning on a single sitting: the first thing you want to do when Refuse the Hour ends is to watch it all over again.

Aditi Mangaldas's dance Within, a meditation on gender in contemporary India, was also breathtakingly theatrical. Mangaldas is a foremost performer of Kathak, a form of classical Indian dance, and is one of several choreographers, such as Akram Khan, who are bringing Indian classical traditions into the realm of contemporary dance. Within feels at once like an intensely personal work and a powerful cultural statement, a feeling mediated by its dialogue between contemporary theatricality and the narrative gestures of Kathak.

Unlike flamenco, a closely related dance tradition, the movement of Kathak doesn't appear to be rigidly gendered: the same movements – foot stamping, hieratic arm gestures, a central trope of spinning and whirling – belong to both sexes. Mangaldas's company of men and women move fluidly between genders, sometimes seeming androgynous, sometimes explicitly sexed as masculine or feminine.

The dance is in two contrasting parts of forty minutes each. The first, Knotted, is a dark and moving contemporary work inspired by the horrific gang rape in Delhi of the woman known as Nirbhaya, or 'Fearless'. It opens in darkness, with a single sodium-coloured light glowing over the stage, like a streetlight or an ominous sun, through which we glimpse running figures that vanish into the darkness. What follows is, for all its contemporary inspiration and percussive electronic score, a meditation about gods. Mangaldas invokes Brahma's incestuous desire for his daughter Saraswati, and the relationship between Shiva, the transcendent masculine deity, and Shakti, the feminine embodiment of fertility and transformation. 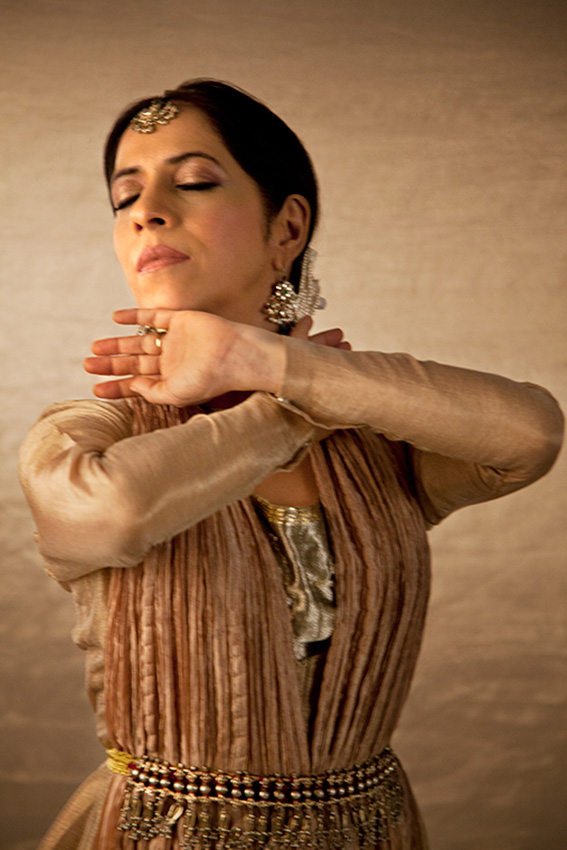 Within (photograph by Dinesh Khanna)

In the centre is Mangaldas herself, a dynamo of feminine power. In the most desolate sequence, she becomes the female body eviscerated, dislocated limbs on the floor of the stage, an object pulsing with appalling violence, before arising from the abyss to defiantly rebuke the gods.

The second part of the diptych, Unwrapped, is a joyous revelation of identity through dance. The music is performed live on stage, and the dancers themselves, bells wrapped around their ankles, feet slapping the stage in intricate rhythms, are as much part of the score as the musicians and singers. Again, the star is Mangaldas, whirling in a passion of disciplined ecstasy that recalls Federico García Lorca's description of the quality of duende: a stripping of form back to its primal passion, an essential emotion that rawly demands our most direct and deepest responses.

Also worthy of more consideration than I can give them here are two solo shows from the United Kingdom, Claire Cunningham's Guide Gods and Jonny Donahoe's Every Brilliant Thing, which provide exemplary contrasts to the larger works. Both are poor theatre in the round, with no tricks: they offer performance stripped of its spectacular dress, in order to speak directly to its audience.

Guide Gods is an exploration of the perceptions of disability in various religions, inspired by a conversation with a Buddhist in Cambodia, who told Cunningham that his disability was the result of karma. Cunningham uses crutches, as she has osteoporosis, and in this gentle, witty show they become agents of her choreography, as she creates movement generated around, of all things, tea cups. It is a democratic and distinctly secular mimesis of the communality of a church service.

Every Brilliant Thing, which tours to the Geelong Performing Arts Centre and the Malthouse Theatre next month, is an unsentimental but irresistibly funny show about suicide and depression. Donahoe enlists his audience as fellow performers, as he tells us of his mother's attempts at suicide and his own subsequent depression. I have seldom seen audience members respond so freely: the performance is generously and skilfully framed to create an aura in which self-consciousness dissolves. And again, by inviting us to be complicit in the making of his show, Donahoe creates a community of understanding. It is at once the least that theatre should attempt, and the most it can achieve. Bravo.