In 1950 a number of Hollywood screenwriters, including Dalton Trumbo, were sentenced to almost a year's imprisonment for contempt of Congress. Their 'crime' was a failure to answer questions from the House Un-American Activities Committee about their involvement with the Communist Party, which in the paranoid atmosphere of the early Cold War was seen as threatening to undermine the United States through subversive movies. Following their release, the writers were placed on a blacklist, which meant no major studio would employ them.

How far those who led the attacks on 'reds' in Hollywood actually believed their own propaganda is a complex question, and one that Trumbo doesn't seek to explore. Rather, the film seeks to use Trumbo's story as an American allegory in which commitment to liberty triumphs and Trumbo, through grit, sheer talent, and the support of a loving family, emerges victorious, resuscitated by the industry which had helped bring him down.

In 2003 Trumbo's son, Christopher, mounted an off-Broadway play based on his father's letters, in which a number of celebrities appeared in the lead role. This in turn led to a 2007 film, also called Trumbo, which is more historically accurate than Jay Roach's film. The new version is aimed at a wider audience, in part through the casting of television star, Bryan Cranston, as Trumbo. As one of the six people in the universe who has not seen Breaking Bad, I was unaware of Cranston, but he inhabits the role with gusto, conveying a man who is simultaneously brilliant, grumpy, loving, and pig-headed.

Before the blacklist, Trumbo was the highest paid scriptwriter in history; after prison he became a paid hack, until he was rescued at the end of the 1950s by Kirk Douglas, who asked him to write the script for Spartacus, and Otto Preminger, who gave him credit for the script of Exodus. In 1975 he was presented with an Oscar for The Brave One (written in 1956 under a pseudonym), though it took several decades for him to be acknowledged as the writer of Roman Holiday, the hit film for which his front man had received an Oscar in 1953. 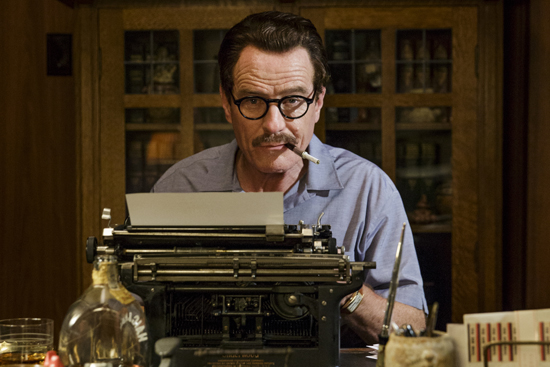 Bryan Cranston in Trumbo (Entertainment One)

Both Christian Berkel as Preminger and Dean O'Gorman as Douglas play their roles with relish, and much of the enjoyment of Trumbo lies in the depiction of Hollywood figures, including Edward G. Robinson, John Wayne, and Louis B. Mayer. John Goodman, as the producer of B-movies who employed Trumbo and his colleagues in defiance of the blacklist, and Helen Mirren, as the gossip columnist Hedda Hopper, bring cartoon-like exaggeration to their roles, filling the screen whenever they have the chance. But it is precisely the glee with which Goodman and Mirren attack their roles that reminds us of the problem of biopics, which is that they necessarily cut and shape what happened to fit the narrative. Trumbo makes use of some newsreel footage from the time, as well as short extracts from several of Trumbo's films, but it is nonetheless a piece of fiction in which accuracy is tempered in the service of narrative – and, in this case, in the service of underlining the moral that we must constantly fight for freedom. The bigger struggle for freedom through the period of the blacklist was that being waged by the civil rights movement. The film pays homage to this through the growing involvement of Trumbo's elder daughter, Nikola (Ellen Fanning), in the movement for desegregation. Alongside his wife, played with appropriate displays of forbearance and commitment by Diane Lane, she provides the necessary domestication of what would otherwise be a forbiddingly austere characterisation.

Trumbo appears at a time when the United States is experiencing fear of a new political repression, with Muslims rather than communists as the target of indiscriminate hate. It is impossible to watch Trumbo without seeing parallels to the present political climate. The untimely death of a Supreme Court Justice, Wiley Rutledge, threatens the balance on the Court and thus the chances of overturning the verdicts of contempt of Congress.

The film ends with Trumbo's actual words to the Writers Guild in 1970: 'There was bad faith and good, honesty and dishonesty, courage and cowardice, selflessness and opportunism, wisdom and stupidity, good and bad on both sides; and almost every individual involved, no matter where he stood, combined some or all of these antithetical qualities in his own person, in his own acts.' 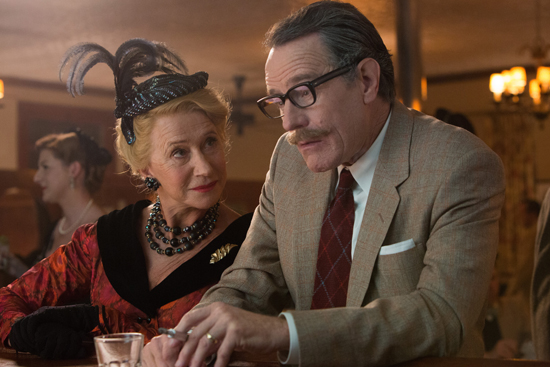 Helen Mirren and Bryan Cranston in Trumbo (Entertainment One)

Unfortunately the film is not brave enough to show up the full range of qualities to which Trumbo refers; there is never any doubt on whose side we are meant to be. In this sense, it reminded me of Truth, the recent film around CBS's airing of allegations about George W. Bush's service in the National Guard. Both films are carried along by the sheer virtuosity of the protagonists (Cate Blanchett in Truth), but fail the more difficult task of making us empathise with those who persecuted them.

Trumbo (M). 124 mins. Directed by Jay Roach, distributed in Australia by Entertainment One. In cinemas from 18 February.