The reappraisal of Australian plays from that great explosion of theatrical creativity in the 1970s and 1980s which has been in train for the last few years continues with the Sydney Theatre Company's production of Louis Nowra's mighty The Golden Age. The play was first performed in 1985, when Australians were still fairly new to the experience of seeing their world on stages which up until then had been showing predominantly British and American works. Most Australian plays were naturalistic presentations of local life. and Nowra's strange, exotic play received mixed reviews. In the years since, audiences around the world have discovered its resonance and power.

The Golden Age is based on an account that may or may not be factual. Just before World War II, two young hikers exploring the remote wilderness in Tasmania came across a small group of survivors of a clan of renegades who had escaped from the brutal 'civilisation' of Hobart town and gone searching for gold. Isolated from the world, they developed their own language and customs, but interbreeding had led to physical and mental decline. By the time they were discovered, there were only six of them left. The matriarch made the momentous and disastrous decision to lead them back to Hobart. Once there they were hidden away in a mental asylum by a government which did not want to give credence to Nazi theories of racial degeneration. Gradually, all but one faded away.

Nowra explores many, almost too many, themes. Predominant amongst them is the destructive power of a dominant culture over a weaker one, a subject to which Nowra has returned frequently. One of the ways this dominance is achieved is through language. In a fascinating interview, Nowra has expanded on this. 'Because I had to learn to use language properly in my adolescence, I became aware of just what a powerful weapon it is. It can be used destructively or creatively. Language is power. ... Language should make people reexamine the world. Language should tear apart the audience's perception of the world and remake it. 'Nowra sees it as a problem that Australia shares the same language as the present dominant power, the United States. We speak more and more in a style that is not native to us. Only today a spokesman for western Sydney, complaining about the lack of arts funding in his area, was quoted as saying, 'Dudes, drop a bit off the edge of the table.' 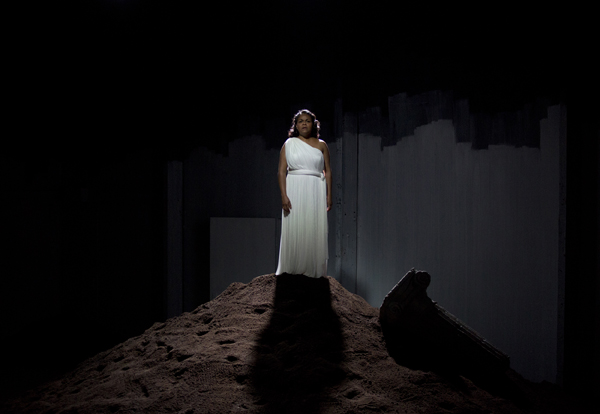 Ursula Yovich in The Golden Age (photograph by Lisa Tomasetti)

In The Golden Age, Nowra has invented a fascinating language for his tribe. A rich mix of nineteenth-century English and Irish patois has morphed over the generations into something that is perhaps more poetic than our present way of speaking. It is a testament to the skills of both Nowra and the cast that what at first sounds like gibberish by the end of the performance makes sense, so that the final lines of the play come across with shattering power.

The play is written in a series of short scenes and takes us to Hobart, the Tasmanian wilderness, and the ruins of 1945 Berlin. I always seem to come back to the adjective 'fluid' to describe Kip Williams's productions, and that fluidity suits the play. David Fleischer's stark setting, a huge mound of mud, works well for the scenes in the wilderness and surprisingly so for ruined Berlin – less so for the Hobart scenes. Max Lyandvert's sound design and subtle, evocative music add immensely to the production's success.

The cast proves, if proof were needed, that this is indeed in Australia a golden age of acting. At its heart, the play is a love story between one of the young hikers, the at first ambitious, working-class Francis and Betsheb, a young member of the tribe. Brandon McClelland shows us Francis's journey from callow youth to angry disillusioned soldier revolted by the horrors of war, and finally to a man wracked with guilt, searching for redemption. As Betsheb, Rarriwuy Hick is enchanting and heartbreaking. Her hugely expressive face and extraordinary physicality overcome the challenge imposed by a role in which speech is either non-existent or for the most part incomprehensible.

As the tribal matriarch, Ayre, Sarah Peirse combines earthiness and grace. When the tribe arrives in Hobart, they are at first taken to the house of Patrick Archer, the other hiker, and his parents – William, a doctor, and Elizabeth, patron of the arts. At a dinner put on by the Archers to show them off to a local politician, it is Ayre and not the supposedly sophisticated Hobartians who shows true poise. William becomes obsessed by the tribe and is horrified by the government's callousness towards them. Like Francis, he is overcome with guilt. Robert Menzies is devastating as he presents William's decline. Liam Nunan as the autistic Stef and Zindzi Okenyo as the monstrous psychiatrist, Dr Simon, also shine, but there are no weak links in the cast.

This is a production fully worthy of this hugely ambitious, slightly unwieldy, magnificent play. 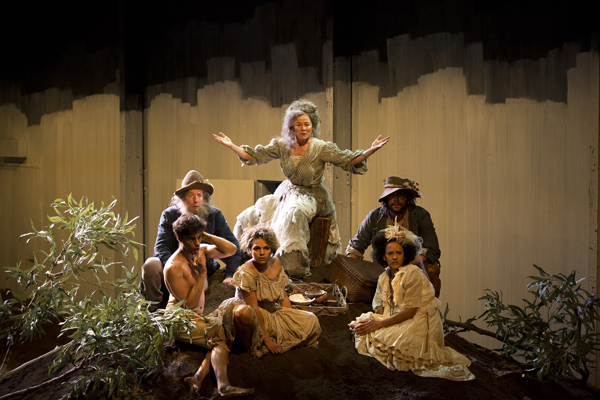 The Golden Age, written by Louis Nowra and directed by Kip Williams for the Sydney Theatre Company, continues at the Wharf Theatre until February 20. Performance attended: 21 January.