The National Gallery of Australia's summer exhibition, opened by Prime Minister Malcolm Turnbull on 2 December, is devoted to one of Australia's finest and most popular artists, Tom Roberts. This major retrospective, under the curatorship of the NGA's Anne Gray, brings together all the major paintings, many of them extracted from the permanent displays of our state and regional art galleries, as well as less familiar works, including several from private collections. The last Tom Roberts retrospective, curated by Ron Radford when he was director of the Art Gallery of South Australia, was held in 1996–97, so it is timely for a new generation to experience the full range of Roberts's art. Arts Update recalls the 1996 launch, which was opened by actor Jack Thompson, in expansive form. That AGSA exhibition toured nationally. The new exhibition will not tour, so a visit to Canberra is essential; it will also afford an opportunity to see the NGA's new hang of its Australian and international collections.

Of the triumvirate of Australian Impressionism – Arthur Streeton, Charles Conder, and Tom Roberts – only Roberts was equally at home with landscapes and portraits. Both genres are covered well in the exhibition. To make visual sense of the artist's extensive oeuvre, the installation is arranged partly chronologically and partly thematically.

Tom Roberts was born in England in 1856. At the age of thirteen he came to Australia with his mother and two siblings. His first art training was in Melbourne, mostly at the National Gallery School where he was in the company of Frederick McCubbin and Bertram Mackennal, among others. One of their teachers was Eugène von Guérard. In 1881 Roberts sailed to London to study at the Royal Academy Schools. He travelled in Europe before returning to Melbourne in 1885, when he painted his first major Australian painting, Coming south, an image of passengers on the deck of the SS Lusitania, strikingly framed by the structure and rigging of the ship. This work dominates the introductory first room, which displays Roberts's early European works and shows the formation of his palette, brush technique, and compositional structures, and also his attraction to sunny climes, notably Spain.

The exhibition is displayed thematically: artist camps, portraits, 9 by 5 Impression exhibition, portraits, national narratives, 'The Big Picture'. It ends with Roberts's final years in Europe and Australia. Roberts was much acclaimed and received major commissions, such as the Opening of the First Parliament of the Commonwealth of Australia (1903) and widespread demand for his portraits. Shortly after their creation, two of his most celebrated paintings, A break away! (1891) and The golden fleece (1894), were acquired from the artist by the Art Gallery of South Australia and the Art Gallery of New South Wales, respectively. They rarely leave the walls of these institutions. 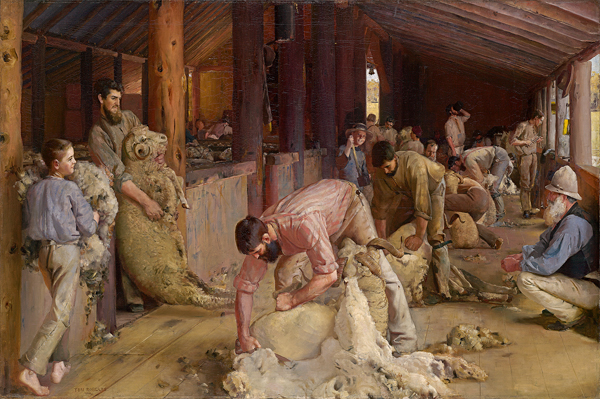 Roberts, along with Streeton and Conder, was one of the artists who painted in the picturesque Heidelberg district above the Yarra upstream from Melbourne. Camping there, the artists painted together and formed friendships, an important outcome being the famous joint 9 by 5 Impression exhibition, held in Melbourne in 1899. This exhibition, largely instigated by Roberts, has been well documented and researched; it is pleasing to see these miniature panels displayed against dark red walls, as the original exhibition.

Roberts had great success with portraits, and it is easy to see why. He made nearly all his subjects seem tall, slender, and elegant. This famously exemplified in Madame Pfund (c.1887) and An Australian native (1888). His deliciously fluffy portrait of Lily Stirling (c.1888), too young to be tall but still amazingly elegant, in a white outfit with fur trims against a green ground, is one of several portraits that give Whistler a run for his money. 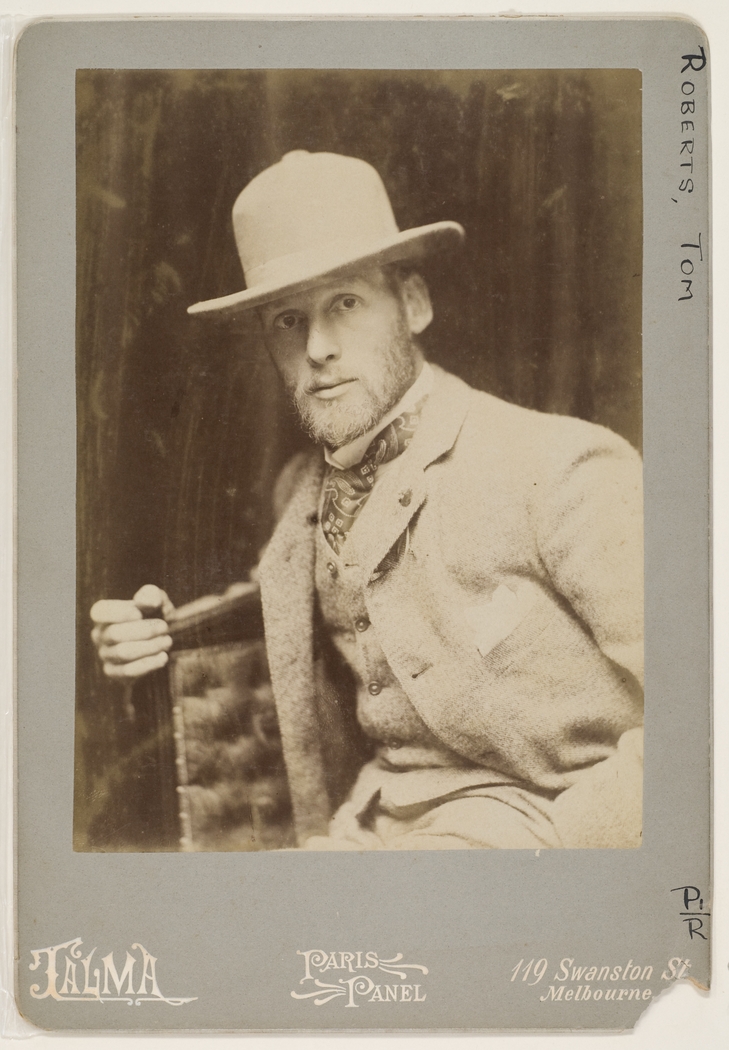 There are some marvellous rarities from private collections, such as The old barracks at Collendina (c.1891), an aesthetic composition of largely pastel tones giving way to trees and sky in the background, and the portrait Peanahgo Billipimbah: Billie Millera (1894), one of a fine series of Aboriginal portraits. There is also a terrific small portrait of Alfred Hill conducting (1897) and a characterful portrait of Sir Henry Parkes (1892).

Discussion of political subjects in Roberts must lead to the major commission in his life, 'The Big Picture' as he called it, or to give it its full title Opening of the First Parliament of the Commonwealth of Australia by H.R.H. The Duke of Cornwall and York (later H.M. King George V), May 9, 1901. At three by five metres, and over six times larger than anything else he painted, this grand historical narrative depicts the opening of the first Australian parliament in Melbourne's Exhibition Building. Roberts worked on this monster in Australia and England for more than two years; he included 269 likenesses of the great and good in attendance. This monumental work normally hangs in Parliament House. Here it is given a room to itself, with sketches and studies, including more intimate portraits sketched from life of the duke and his duchess, works with more appeal to modern taste than the grandiloquent 'Big Picture' itself. Despite the ponderous certainty with which this painting celebrates its subject, in his essay on the work Humphrey McQueen reminds us just how precarious was national agreement to Federation.

'Roberts worked on this monster in Australia and England for more than two years; he included 269 likenesses of the great and good in attendance'

Roberts is best known for his national narratives of the 1890s – Shearing the rams, The Golden Fleece, A break away! and Bailed up. Roberts, as much as anyone in Australia, played a strong role in creating the national identity during the late nineteenth century. The three sheep pictures show maleness and manual labour and celebrate the Australia that once 'rode on the sheep's back'. The bushranger painting presents a subject that by the 1890s was already becoming part of folklore. These works, full of lively detail and interesting compositional structures, avoid pomposity. It is worth travelling to Canberra to see these 'iconic destination pictures', as Gerard Vaughan, director of the NGA, has dubbed them.

After the grandeur of these works and the 'Big Picture', the final room is bound to be an anti-climax, for it covers the later period from 1903 to the late 1920s. All the artist's best and most arresting pictures have already been seen, as well as his worst, Mountain muster (1897), which was understandably unsaleable in Robert's lifetime; it is a discordant inclusion in the new exhibition. Not that Roberts did not paint some fine pictures in his later years, but the major works had been created by 1903, when he returned to England for a decade (Roberts visited Australia in 1919–20 and returned for good in 1923). 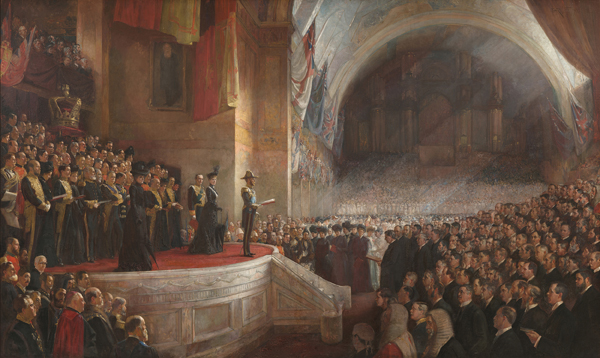 Tom Roberts, Opening of the first parliament of the Commonwealth of Australia 9 May 1901 (Royal Collection Trust, on permanent loan to Parliament House, Canberra)

The substantial and handsome exhibition catalogue has extended opening essays on Roberts by Anne Gray, followed by essays from Vaughan, Gael Newton, Daniel Thomas, McQueen, Roger Butler, and Deborah Hart, as well as a pair of technical ones by conservators David Wise and Michael Varcoe-Cocks. The Roberts who emerges from Gray's absorbing and informative biographical and art-historical chapters is a charming, driven, highly intelligent and inquisitive man, with an enormous capacity for friendship. (A team of art historians and curators provide interesting in-focus essays on the individual works.) The other essays cover the art market, photography, prints, Tasmania and Glover country, and Roberts's influence on Arthur Boyd and Fred Williams.