The 'anxiety of influence' is just as pertinent to music as it is to all the arts. Scholars have claimed that Mozart was strongly influenced in the composition of Le nozze di Figaro (1786), by André Grétry's (1741–1813) L'Amant jaloux (The Jealous Lover, or False Appearances) (1778). The musical and dramatic genius of Mozart suffuses every note of the score of Figaro, but it is perhaps the brilliant ensembles that punctuate the action, culminating in the two finales that end the second and fourth acts, where true genius separates itself from workmanlike competence. (I reviewed the current Opera Australia production for Arts Update). Mozart developed the musical flexibility and sure dramatic sense within the conventions of the time, enabling him to allow the action to continue during these concerted numbers, rather than them turning into 'stand-and-sing' moments, as was common. One need only look at Mozart's great contemporary Joseph Haydn, to see where genius in one musical genre does not necessarily transfer into another. Although containing some delightful music, most of Haydn's many operas are dramatically stillborn; strong musical ideas are not fully developed in a dramatic way.

Whether Mozart was indeed influenced by Grétry is difficult to prove either way, and ultimately unimportant, as all great composers have 'stolen' from their predecessors and contemporaries. Time is probably the best test of genius, and Grétry's operas are seldom performed; this tells its own tale. Grétry's most popular opera was probably Richard Coeur-de-Leon (1784), a 'rescue opera' of the kind that would culminate in Beethoven's Fidelio. A performance of this particular opera would be most welcome; some of the arias from the work are delightful. Indeed, there are several arias from operas by Grétry that find their way into concert programs and on disc, but performances of the complete operas are rare and very much to be welcomed. This neglect is unfortunate: Grétry was a fine composer, and certainly an important and influential figure in French opera of the second half of the 18th century. He, like Étienne Méhul and Luigi Cherubini, as well as several others, are names that still resonate tantalisingly across more than two centuries.

Grétry was born in Liege, but, encouraged by Voltaire, made his home in Paris where his first opera, Le Huron, was premièred in 1768, a work which owes much to Voltaire's Candide. Grétry's career soon flourished and many operas followed, including two of his operas being simultaneously premièred at Fontainebleau during the festivities celebrating the wedding of the future Louis XVI and Marie-Antoinette in 1770. 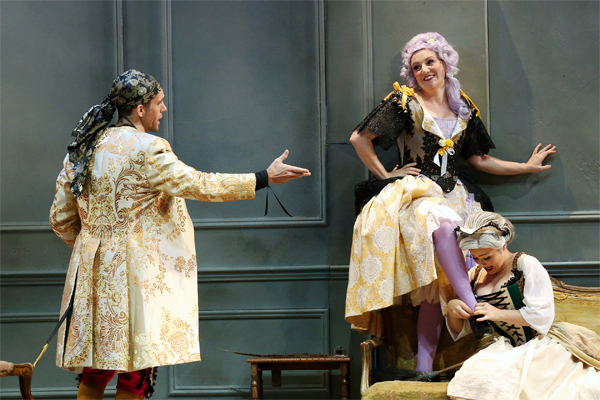 But it is as a composer of opéra comique that Grétry made his reputation. This genre originated much earlier in the century, but achieved some notoriety during the so-called Querelle des Bouffons – the 'quarrel of the buffoons' between 1752–54 – a tussle between proponents of rival French musical philosophies. A performance of Pergolesi's short opera intermezzo, La serva padrona, by an Italian company in Paris, ignited the quarrel between the supporters of Italian music and the defenders of the French tradition, drawing in eminent figures including Jean-Jacques Rousseau, who in fact wrote a short opera in the Italian style. Grétry's skill was his ability to blend these two operatic traditions, combining an Italian lyricism and tunefulness with a French literary sensibility, including marked sensitivity to the setting of the French language.

So is L'Amant jaloux worth reviving? The answer is definitely yes, although it is not a work that is likely to enter the repertoire. The story is a typical concoction found in many a comic opera of the eighteenth century, with several impatient suitors, a perky servant girl, mysterious strangers, and cross currents of jealousy and mistaken identity, but it is no more incomprehensible or ridiculous than many other more highly regarded works.

Grétry's librettist for the opera was the Irishman Thomas Hales (1741–80), who gallicised his surname as d'Hèle. He sourced the opera from English writer Susanna Centilivre's popular and durable 1714 comedy, The Wonder: A Woman Keeps a Secret. It is the finales of L'Amant jaloux that have been compared to Figaro, and musicologist David Charlton has traced the connection between Mozart's visit to Paris in 1778 when Grétry's opera was premièred. It is not known whether Mozart saw Grétry's work, but the structure of particular situations in Figaro have been traced from Grétry to Beaumarchais and then to Mozart.

If the opera is known at all today, it is for the two arias that sometimes appear in concert and on disc. The first is the charming tenor serenade 'Tandis que tout sommeille', with its unusual mandolin accompaniment. The best is 'Je romps la chaîne qui m'engage', a fierce coloratura display for Léonore. These challenges were met with aplomb by Celeste Lazarenko who brought a crystal-clear and beautiful limpid tone to the role, effortlessly negotiating the high-lying vocal line; this was some of the finest singing on the opera stage in Australia this year. Ed Lyons's role, Don Alonze, calls for a robust and flexible tenor, and this he delivered, as well as a lithe stage presence. Their extended scene, which ends Act Two, is one of the highlights of the score; it is interrupted by the aforementioned tenor serenade, sung charmingly by Florival, Andrew Goodwin.

David Greco, while perhaps not possessing all the buffo fruitiness for the role of the father, Don Lopez, certainly portrayed the sleaziness of the character with excellent diction and perfect timing in his spoken dialogue. Jacinte, the stereotypical servant girl, sung by Jessica Asodi, delivered her dialogue with bite, although the vocal tone was occasionally a little harsh. Alexandra Oomens was a charming and sweet-toned Isabelle, another beautiful young voice to watch. The English translation of the dialogue was witty and knowing, if on occasion, a little too long; the transition into the French sung text worked well. Not all the singers delivered the text with equal clarity, but the events moved with pace and verve.

Within the severe scenic constraints of Angel Place, the set by David Fleischer provided many opening doors through which the farcical action could evolve, as well as creating a good sounding-board for the singers to project into the difficult acoustic of Angel Place. The production by Chas Rader-Schieber was imaginative and inventive, while the costumes by Christie Milton were witty and attractive. The entr'acte before the second act, with mandolin accompaniment (Stephen Lalor), effected a scene change into the bedroom with humour and aplomb, although a similar entr'acte introducing the second part was too long and held up the action, despite lovely playing by baroque flutist Melissa Farrow. The conductor, guiding light and musical intelligence behind the performance was Erin Helyard, a fine example of a scholar/musician, and one of the most talented musicians in Australia. He kept the pace of the music constantly surging forward – in a way Mozart would have enjoyed – with excellent playing from the Orchestra of the Antipodes, though occasionally it swamped the young voices on stage. 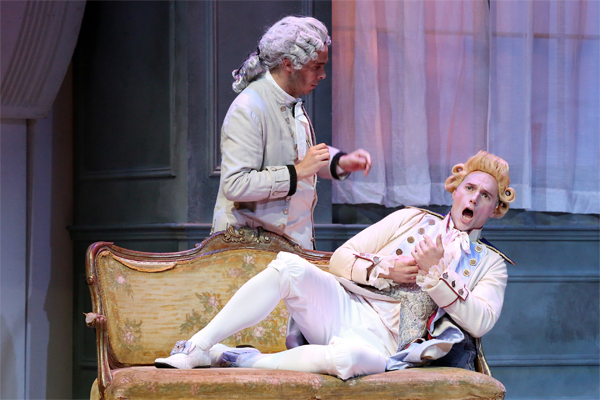 So does a comparison with Figaro hold up? Not really. Grétry's ensembles are excellent, full of musical interest, variety, and pace, but his solo arias, with a few exceptions, are disappointing. They are often simple and folk-like, but never with the invention of say Mozart's folk-like Voi che sapete, for example.

Grétry was a survivor; he lived through the Revolution and ended up receiving the Chevalier of the Legion of Honour and a pension from Napoleon, dying a wealthy man in 1813. Will we ever experience a revival of his operas? Probably not, but Pinchgut is to be congratulated on providing a window into this all but forgotten world.

L'Amant jaloux, by André Grétry, is directed by Chas Rader-Shieber for Pinchgut Opera. The season continues at City Recital Hall in Sydney on 5, 6, and 8 December 2015. Performance attended: 3 December.