It opens with a deep black-walled stage devoid of props, but for a spotlit microphone. Instead of the feared cast change or sponsorial fealty, on walks Marilyn Monroe at Madison Square Garden, with her sequined dress and curvaceous glamour. We recognise Robyn Nevin, defying the years. Funny as Blossom Dearie, she sings 'Happy Birthday' to 'Nuncle Majesty' before yanking off her wig and yielding the stage to Lear and his clamorous court, the men in dinner suits, Goneril and Regan flamboyantly gowned as if for a charity ball. Urged on by their importunate father, the sisters take it in turns to express their devotion and thus claim a share of Lear's kingdom.

Then it is the turn of Cordelia – youngest of the three sisters – whose disinclination to flaunt her filial affection has already been expressed sotto voce ('Love, and be silent'). Refusing to speak she returns to her place. Finally, asked what she has to say to win an opulent share, she says, 'Nothing', twice.

Nothing – never-dying nothingness – informs Neil Armfield's production of William Shakespeare's masterpiece. Nothing, as Lear tells his unresponsive daughter, will come of nothing – darkest of his prophecies.

Tony Tanner, lexically attentive as ever in his masterly prefaces for Everyman's Library, notices how often the word 'nothing' is used:

The word becomes increasingly ominous and it is as if we are watching the world of the play being infiltrated with 'nothingness' – indeed, actively serving to install it, a world literally an-nihil-ating itself. It is a spectacle almost to freeze you – a world turning, returning, itself to 'nothing'.

King Lear has been performed and interpreted in myriad ways, with all kinds of directorial approaches: Christian, humanist, psychoanalytic, post-structuralist, new-historicist and so forth. Armfield, scrupulous with the text, accentuates the philosophical obsessions and terrors that fill the play. Nihilism underpins the action and, to different degrees, motivates the various players. 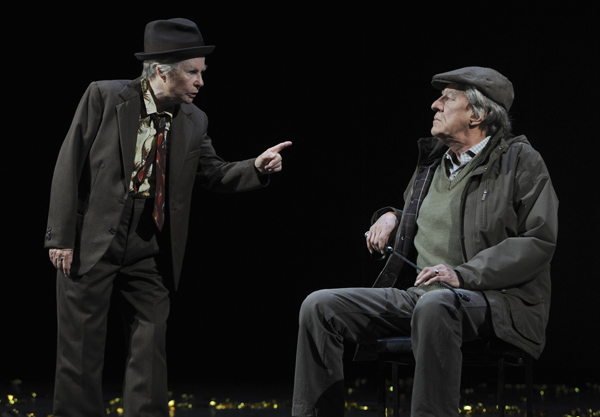 Despite the boisterous opening, loss is soon enthroned – loss of kingdom and stature, loss of father, loss of daughter, loss of loathed or homicidal siblings, loss of sight, loss of mind, loss of will even – though not, ultimately and importantly, of feeling.

Armfield's Camelot conceit gives the performance an electrifying start. Shakespeare, of course, hurls us into the internecine court without niceties or preambles. 'I thought the King had more affected the Duke of Albany than Cornwall,' says Kent. Instantly we know we are in a world of vulnerability and favouritism, partiality and unpredictableness. We sense a long history of disharmony in the family. Much has gone on before, including violence perhaps; the women flinch at their father's approach.

The rivalrous older sisters know that Cordelia is their father's true 'joy'. Cordelia herself is conspicuously self-righteous. Even dishonoured, disowned, Cordelia is queenly (the king of France recognises this and immediately marries her, despite her poverty). She won't sing for her supper or her inheritance, but she maligns her sisters in public and beseeches Lear to vindicate her reputation. (Stubborn as Cordelia, Lear replies: 'Better thou / Hadst not been born than not t'have pleased me better.')

Any illusions about character have long since crumbled in this family. Goneril and Regan – newly favoured – agree that their father 'hath ever but slenderly known himself'. They speak of the 'infirmity of his age' and 'the imperfections of long-ingraffed condition'.

There are no mothers in this world – and there will be no more children. It is a kind of dystopia. At the end of the play we are left with an exclusively masculine world, and our author depicts it with none of the sly relish of an Alan Hollinghurst.

Geoffrey Rush's Lear (his début in the role) is at first a petulant and egotistical ogre. 'Come not between the dragon and his wrath,' he warns Kent. The transformation in this martinet is profound. Rush conveys Lear's rising helplessness and incomprehension, especially in the scene with Goneril when it dawns on him that his omnipotence is over; that the Fool was right when he dubbed him 'an O without a figure'. All he is left with is his contumelious rhetoric, of which there are many examples (e.g. to Goneril: 'Into her womb convey sterility. / Dry up in her the organs of increase'). 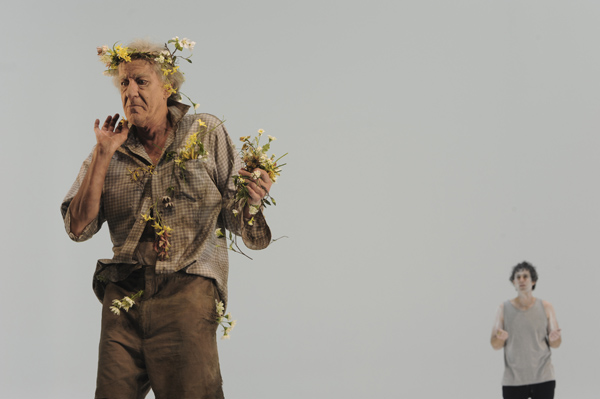 Shakespeare – despite the riskiness of depicting regicide on stage – had already written plays about the fall of kings: Julius Caesar, Hamlet, and the two Richard plays. Here, though, he is at his boldest. A monarch – in the age of absolute monarchs – relinquishes his throne, admits to 'darker purpose', and is disobeyed by his daughters and scorned by their flunkeys.

Geoffrey Rush – an unforgettable Lear – is completely at home with the poetry, and vocally commanding when he needs to be. The Storm Scene (of which we had a funny foretaste in Fred Schepisi's film The Eye of the Storm, 2011) is powerfully done. Lear's mental dissolution is terrible to watch, and the long scenes of rapprochement and regret with Gloucester and Edgar and, later, Cordelia are charged.

Homeless, loveless, realmless, Lear learns he is no different from naked and shivering Poor Tom. In one of his greatest utterances, Lear says: 'Unaccommodated man is no more but such a poor, bare, forked animal as thou art.' With blinded, sonless Gloucester he goes even further: 'There thou mightst behold the great image of authority: a dog's obeyed in office.'

Samuel Beckett could not have put it more succinctly.

Ultimately, Lear sympathises with a beggar in a play where we hear that 'distribution should undo excess / And each man have enough.' Thus Lear is radicalised and humanised and feminised ('O, how this mother swells up toward my heart').

We know the play was performed before James I at Whitehall in 1606. We can only imagine how it was received by the new king, uniter of kingdoms, son and father of decapitated monarchs. Kiernan Ryan is droll on the subject:

... it is hard to imagine how the scandalous import of Lear's ordeal could have escaped them, or failed to leave them chastened. On the other hand, there is no reason to suppose that James and the aristocrats about him were any less adept at deflecting the implications of art away from themselves than the audiences of our own day are.

(ABR Arts was struck by similar thoughts on Saturday evening, seated in the stalls among a remarkable assemblage of politicians and grandees and plutocrats.)

Nihilistic to the last, the play offers no solace – no Christian comfort. Some baulk at this, of course. Samuel Johnson couldn't bear to read the final pages and deplored the fact that Shakespeare 'suffered the virtue of Cordelia to perish in a just cause'. But in Lear's re-visioned world there is no justice – only wailing and crying between the cradle and the grave. It is why he relishes the prospect of death ('Away, and let me die') and why he fondly shudders when Cordelia, before her murder, wakens him: 'You do me wrong to take me out o'the grave' (which Geoffrey Rush delivers with immense and gentled feeling). 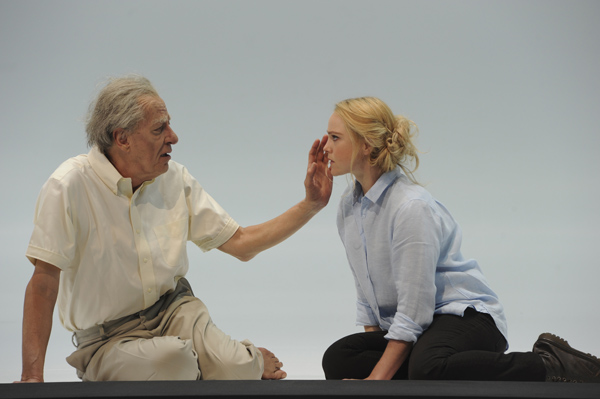 At the end, all but three of the principals are dead – the good and the bad, the blameless and the mendacious. It is as though we need to be taught a lesson – reminded of something. 'All's cheerless, dark, and deadly,' says Kent, himself declining the crown and choosing death. The survivors are rueful, hopeless. Edgar, wearing his tinsel crown, is joyless, and the play ends on a strong note of foreboding ('we that are young / Shall never see so much, nor live so long').

Armfield coaxes performances of great depth from his cast. The poetry is always at the service of the drama, not the reverse. 'Great speeches', great phrases, pass by almost unnoticed (though never unabsorbed), such is the urgency of the drama. There is no cheap grandiloquence.

Nor is there a weak performance in this outstanding production. Jacek Koman is especially good as noble-hearted Kent, as is Helen Buday as Regan. Robyn Nevin adds to her repertoire with a Fool of great pathos, one who is always grieving at the loss of Cordelia. Nevin, in glorious sync with the musicians in the upper box, plays the Fool as a kind of broken-hearted vaudevillian. Nevin steals most of her scenes, but then, desolated by everything that happens, withdraws midway through with that inscrutable quip – 'I'll go to bed at noon.'

Apart from Geoffrey Rush, the night belongs to Mark Leonard Winter (Edgar). It follows Winter's celebrated performance in the MTC's Birdland (much lauded in our Arts Highlights of the Year) The role of Edgar is a crucial one, and we know he was given second billing after Lear in the 1608 Quarto. Winter's Edgar is wide-eyed and credulous at first, easily gulled by his illegitimate half-brother Edmund (the compelling Meyne Wyatt). Shakespeare devotes much attention to Edgar's alter ego, Poor Tom, and here Winter is arresting, a brilliant combination of vocal power, physical artistry, and emotional desperation.

The Dover Cliff scene is one of the most daring episodes in this audacious play, and Winter is at his best as he leads his beloved father, Gloucester (Max Cullen) to the faux-verge and fantasises about the scene below in some of Shakespeare's most thrilling language. This is a virtuoso and illusory world, but finally Edgar can peer (in his imagination) no further:

I'll look no more,
Lest my brain turn, and the deficient sight
Topple down headlong.

As Coleridge said: '[Shakespeare] writes not for past ages but for that in which he lives and that which is to follow', and 'shakes off the iron bondage of space and time'.

For six more weeks, shaking off our own bondages, we can enjoy, if that is the right word, this timeless, ever-unsettling study of power and derangement.