Released in 1975, the début album by American songwriter, poet, artist, and memoirist Patti Smith captured a volatile alchemy of past and future modes. Horses came out of the much-mythologised rock scene of 1970s New York City, but also fed on the unbridled lyrical freedom of Beat poetry, the firmer narrative tradition of hymns, and the bodily release of formative 1960s rock and soul.

Smith advertised rather than masked these diffuse influences, basing several of the album's tracks around spirited hybrids of her original songs and transformed cover versions. Thus, songs like the rock standard 'Gloria' (penned by Van Morrison for his band Them) and the oft-covered soul romp 'Land of a Thousand Dances' became absorbed in the creative wellspring of Horses, mingling the known origins of rock'n'roll with Smith's free-flowing openness of expression.

Considering the album's Rosetta Stone effect, it might seem daunting for an outside group of musicians to attempt recreating the whole thing live. Then again, Horses is all about malleability, so why not commemorate Smith's emboldened interpretative leaps with one's own added reinterpretation?

That was the unstated mission of Victoria-based vocalists Adalita Srsen (former leader of 1990s rockers Magic Dirt and now a solo artist), Jen Cloher (a genre-jumping singer/songwriter), Gareth Liddiard (leader of The Drones, a rock band merging the feral and literate), and Courtney Barnett, Australia's breakout solo artist of 2015. The four teamed up for a track-by-track rendering of Horses as part of this year's Melbourne Festival, communing with this holy artefact. Thanks to brisk ticket sales, a matinee show was added as both a bonus and warm-up. 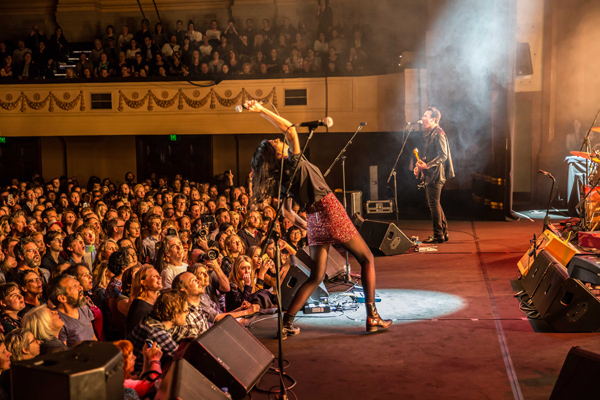 After a slow ticket-collection process saw a sprawling queue languish outside Melbourne Town Hall until well past the advertised start time of 5pm, the hour-long show began at a quarter past. With the seating removed from its first floor, the venue held an impressive audience split between adherents of Smith's original album, eager Barnett loyalists, and those who qualify as both.

Barnett's popularity may have been responsible for a surge in interest, but she only sang lead on two songs, sharing the vocal duties with her collaborators. Backed by Drones guitarist Dan Luscombe, who also played in Barnett's band for some time; Drones keyboardist Steve Hesketh; Cloher's regular drummer, Jen Sholakis; and bassist Ben Bourke, the four singers eschewed stage banter altogether and concentrated on making a smooth tag-team transition between songs.

'Considering the album's Rosetta Stone effect, it might seem daunting for an outside group of musicians to attempt recreating the whole thing live'

Srsen took the microphone first, propelled by an overheated rumble that merged the aforementioned 'Gloria' – in all its spell-out-the-letters festivity – with Smith's 'In Excelsis Deo' (with 'Gloria', the Latin title of an enduring hymn). Srsen made the song's stream-of-consciousness current her own, easily bridging the gaps of decades and continents between her and the source material. Barnett then echoed Smith's roving intonations for 'Redondo Beach', paying homage to that dripping-with-cool drawl without losing her own signature parched-and-cracked delivery. 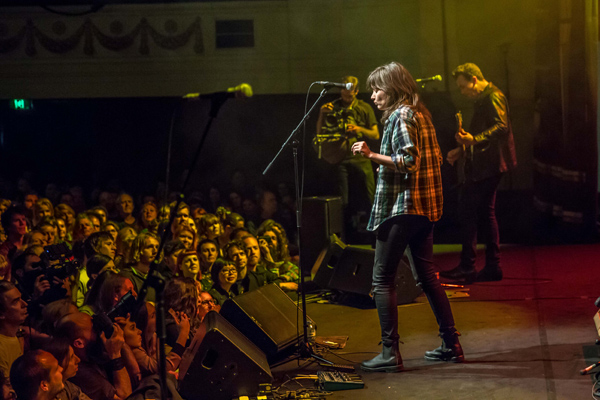 Wielding an electric guitar, Liddiard coolly transitioned from the fragile spoken-word start of 'Birdland' to its epic, free-form climax, including overt echoes of more rock oldies and other signposts of the past. Srsen returned for 'Free Money', swinging from jazz smokiness to noisy bravado. Cloher was the last of the singers to take the stage but wound up stealing the show; her impassioned movements and phrasing furthered Smith's scenery-chewing from the original album. Cloher's background as an actress rose to the fore, and she looked thrilled when later handling the sudden accelerations, nightmarish storyline, and frat-party evocations of the three-part 'Land', culminating in an enthusiastic circuit around the back of the stage that brought her back out the other side.

Luscombe summoned the lanky guitar wizardry of Tom Verlaine (of fellow New York pioneers Television) on 'Break It Up', while Barnett embraced the chance for pure bombast as a vocalist. Matching the starkness of the album's mood swings, Liddiard located his quieter side for the skeletal finish 'Elegie' [sic]. 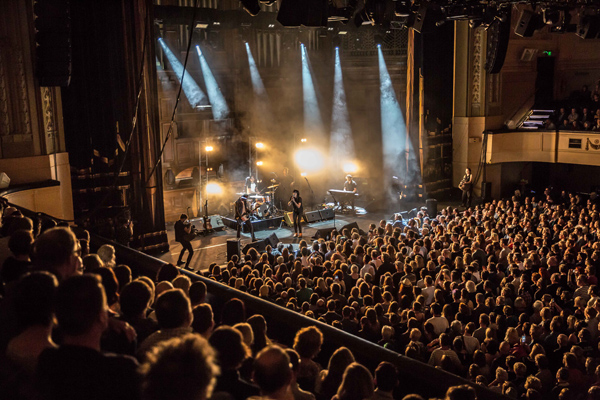 As an encore, the singers united for an all-star rendering of 'My Generation', The Who's 1965 proto-punk anthem that was covered live by Smith and friends and included as a bonus track on later editions of Horses. There was no attempt to sidestep the intrinsic element of shtick in performing such a well-trodden song with four vocalists taking turns. If anything, Steve Hesketh welcomed that feeling by departing from his keyboards to commandeer the house organ overhead, although the results were hard to make out against the broader tumult.

Repackaged with such vitality, this classic album's famous maze of resonances accumulated even more layers. Here was a studied salute to one of rock's most ambitious albums, but at the same time a friendly, instinctive collaboration between peers, knocked out in an hour's time on a sunny Sunday afternoon.