Spurred on by Expo Milan, La Scala is having a busy couple of months. Entitled Feeding the Planet, Energy for Life, the Expo is supposed to stimulate ideas for sustainable nutrition in a world with a rapidly expanding population and an equally rapidly diminishing arable area. However, the report from those who have braved the enormous crowds and endless queues is that the pavilions seem to be more about national aggrandisement than practical solutions, and that the money involved in setting it up might have been better spent actually feeding the needy.

As a cultural adjunct to all this palaver, La Scala has been hosting a series of very distinguished orchestras. We had been scheduled to attend a concert by Concertus Musicus Wien, but the serious illness of its founder, patron, and chief conductor Nikolaus Harnoncourt led to its cancellation. We were, however able to hear the Accademia Nazionale di Santa Cecilia under its musical director since 2005, Antonio Pappano. The Roman orchestra was definitely out to show the Milanese what they could do, and in this they succeeded triumphantly. After a brisk rendition of Spontini's turgid overture to Olympie, the orchestra settled into a spirited interpretation of Beethoven's Second Symphony and a magnificent one of his Fifth. Pappano steers a path between the underpowered, bloodless versions of the early music aficionados and the plodding Klemperesque style that was the norm half a century ago. In his combination of lightness of touch and emotional power he reminds me of Carlos Kleiber in this repertoire, and there can be no higher praise than that.

Two nights later, La Scala presented the first night of a return season of Robert Carsen's peripatetic production of Verdi's final opera, Falstaff, which has also been performed in London and New York.

Carsen updates the opera to 1950s England. The Garter Inn becomes a country hotel with what looks to be a facsimile of the great bed of Ware, and the second scene takes place not in Ford's garden but in the hotel dining room. Alice's kitchen, a 1950s housewife's fantasy, drew an audible response from the audience. This works well enough and clearly accentuates the subtext of the fading aristocrat versus the nouveau middle class. But in an effort to keep the energy levels high, the production is at times too busy and the glorious final C major fugue is clumsily staged. 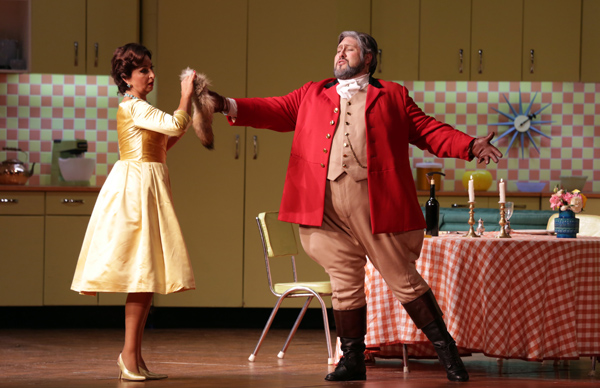 The impressive Scala programme, with its combination of erudite comment, extensive historical documentation, and outrageously glossy advertisements, looks like a PhD thesis published by Vanity Fair. It has an awe-inspiring list of previous Falstaff productions and casts presented at the theatre, starting with the world première on 9 February 1893. An opera fanatic could fantasise about being in the audience on the night of 11 March 1957, when Herbert von Karajan conducted a cast that more or less mirrored that of his famous recording: Gobbi, Schwarzkopf, Moffo, Alva – or dream of being in Milan in December 1961 and deciding whether one would rather go to a performance in which Nannetta was sung by Mirella Freni or one with Renata Scotto in the role.

As if all that history were not enough, in this production the Falstaff, Nicola Alaimo, has big shoes to fill. The original staging was built around Ambrogio Maestri, widely considered not merely the leading Falstaff of the moment but one of the all-time greats. Moreover, in a recent Milan outing, Bryn Terfel shared the role. At thirty-seven, Alaimo is young for the part. He sang and acted well and pointed the words superbly, but at present he lacks the authority to dominate the stage and become the focal point, the life force, the man who can say 'Son io che vi fa scaltri L'arguzia mia crea l'arguzia dgli altri.' ('I am the one who makes them so clever. My wit creates the wit of others'). Without a dominant Falstaff, the opera becomes merely a romp and loses some of its poignancy and life-affirming qualities.

Massimo Cavalletti made a strong Ford, even managing to carry off his ridiculous rhinestone cowboy outfit when disguised as signor Fontana. His jealousy aria was a highlight of the show. 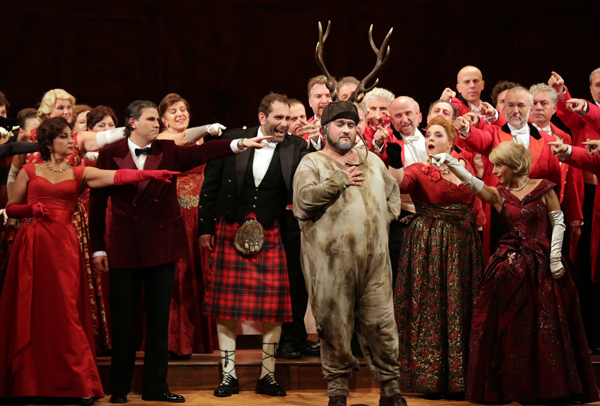 The women were all good. Eva Mei's Alice exuded charm, energy, and resourcefulness. Marie-Nicole Lemieux, the one holdover from the original Covent Garden cast, is a practised Mistress Quickly and uses her rich lower range to advantage. As Meg, Laura Polverelli made her mark in what has to be one of the most thankless roles in all opera. At the start, Eva Liebau was a rather wan Nannetta, but she came into her own with a lovely account of her final-act aria.

An opera which equates gluttony with a love of life is perhaps not the most suitable complement to an exposition which predicts future food shortages, but La Scala's Falstaff is nevertheless a worthy addition to its season.

Falstaff, by Giuseppe Verdi, is directed by Robert Carsen and continues at La Scala in Milan until 4 November 2015. Performance attended: 14 October.