Twenty-five years ago, John Bell undertook to create an Australian theatre company devoted to Shakespeare, a travelling repertory company that would give wide access to this wonderful legacy of our language. It harked back to a time when Shakespeare mattered so much to Australians that an actor could make a name performing Shakespeare rather than appearing in Hollywood films. At Belvoir you can see some of the other members of Bell’s generation, including his wife, Anna Volska, working their charm in Matthew Whittet’s sweet piece of nostalgia, Seventeen.

Bell’s company, though, has never been reliable in delivering memorable, or even good, productions of Shakespeare. There have been some triumphs – an early The Merchant of Venice in a tent, a beautiful Antony and Cleopatra, a confronting Troilus and Cressida –and over the years the company has offered us some of Shakespeare’s lesser-known and, dare it be said, less accomplished plays. There have been difficult financial as well as artistic times; Bell’s persistence must be admired. Now, he has announced his retirement from the company as actor, director, and co-manager. Last month, I went along to see Bell’s last acting performance for the company as Jacques in As You Like It, only to be disappointed by the crudity and clumsiness of Peter Evans’s production. I feared that Bell’s finale as director of The Tempest might not be a fitting end to his extraordinary project.

The Tempest is, of course, the perfect play for a farewell to the stage. The director’s program notes insist that the play was not Shakespeare’s last hurrah, but its magical fantasy and Prospero’s final laying aside of his secret arts invite us to read it that way. Not that this will be Bell’s last gasp: next year he will direct Carmen for Opera Australia.

Blessedly, this production of the play leaves all the tricks to the stagecraft. It makes no attempt to read post-colonialism or post-structuralism or theories of oppression into Shakespeare’s work. There are no 1950s cocktail dresses, no island in the Whitsundays, nor a recognisably indigenous Caliban: this is a straightforward production that concentrates on the magic and the poetry. The stage is minimally dressed: a raised platform in lilypad shape to mimic an island, some glistening side curtains that fly out and roll across the stage in the storm, while a few layers of flimsier stuff at the back assist the entrance of ethereal spirits. Lightning flashes and thunder do the rest of the work for the storm, while a length of heavy rope is all that is needed to link the mariners on a foundering ship; later it serves as Caliban’s chains. 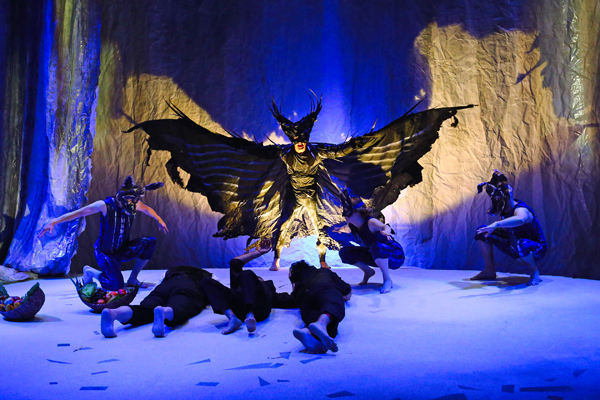 The Tempest contains no drama of character to engage actors in introverted monologues. How then to avoid it seeming like a poetry recitation or pageant? At the beginning, Prospero’s long exposition of the backstory to Miranda can slow things down; here it is assisted by the various participants in his demise appearing to mime their roles in his abandonment on the island; the story moves along at a good pace. Matthew Backer’s Ariel may seem rather substantial at first, but his beautiful singing and the choreography as he shadows other characters help us to believe in his ethereality and possible invisibility to all but the audience and Prospero. Damien Strouthos’s Caliban is rough around the edges but hardly monstrous or frightening. The production emphasises their contrast of the spiritual and the earthy and allows the audience to hear the similarity in their calls for freedom.

‘Blessedly, this production of the play leaves all the tricks to the stagecraft’

Whenever the formality of the play’s romance threatens to slow it down or Brian Lipson’s Prospero begins to tire, Stefano (Hazem Shammas) and Trinculo (Arky Michael) bounce onstage, energising it with their slapstick antics. Their ostensible roles as butler and servant disappear under their clown costumes, and they are transformed into pantomime dames in their efforts to mimic the aristocracy. They are irresistibly funny, so that when these actors double as the treacherous Antonio and Sebastian we are inclined, like Prospero, to forgive their crimes. Eloise Winestock as Miranda and Felix Gentle as Ferdinand manage their limited roles as the lovers well enough, though Winestock tries too hard to find things to do. By contrast, Robert Alexander demonstrates a relaxed clarity of delivery as Gonzalo. 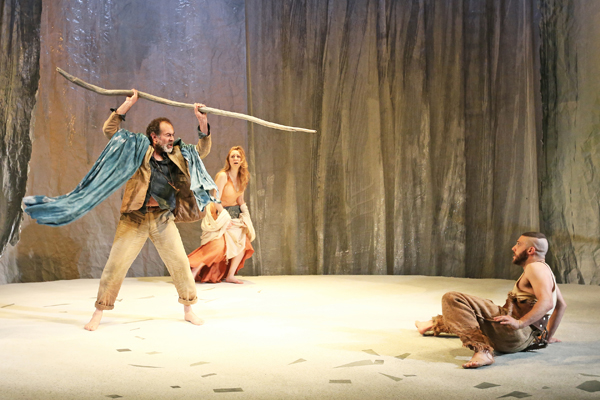 This is a production which demonstrates what can be achieved with traditional theatrical skills and simple stage effects. We are allowed to hear the play’s poetry and come to our own conclusions about its meaning. Every character craves freedom, though they all have different notions of what it means – returning home, being a king, getting married, serving a different master, or just being idle, as Gonzalo suggests. Ariel’s song ‘Where the bee sucks, there suck I’ invokes the freedom of imagination and fantasy, and this production offers us freedom from everyday reality for a little while – the enchantment of a delightful theatrical performance.

The Tempest, by William Shakespeare, is directed by John Bell for Bell Shakespeare, The Playhouse, Sydney Opera House, until 18 September 2015. Performance attended 29 August.