The gestation of Harold Pinter’s fearsome, hilarious plays was often as interesting as his celebrated dramatic pauses. Betrayal, from 1978, is a good example. Though Pinter was then engaged in an affair with Lady Antonia Fraser that would end his marriage to Vivien Merchant – Pinter’s muse and the creator of many of his great female characters – Betrayal was prompted (the MTC program tells us) by an earlier affair with television presenter Joan Bakewell. She learned this when Pinter sent her the manuscript of the play, as he always did. ‘[P]age by page I began to realise that the plot echoed my own life. I just sat and stared at the copy in my hand, my head empty of thought; just an appalled sense that my life was being raked over.’ (Pinter’s biographer, Michael Billington, discusses the affair here, in an interview with Fiona Gruber via MTC talks.)

As in the play, the Pinter–Bakewell affair had lasted seven years. This was at the beginning of Pinter’s career, when Bakewell’s husband and Pinter’s friend, Michael Bakewell, was commissioning some of the radio plays that would briskly make Pinter famous.

Pinter’s play – first performed by the MTC in 1980, and again in 2001 – is all about adultery, the subject dearest to his creative heart. Startlingly, the play (ninety minutes long and performed here without interruption) is anti-chronological, a brilliant device. We begin at the end, as the lovers (Emma and Jerry) meet awkwardly in a bar two years after their last rendezvous. Jerry is hungover; Emma has been up all night, having learned that her husband (Robert) has been deceiving her all along. She wants to look at her former lover; find out what life has done to him too. People in this play are always asking one another how they are, as if they expect them to know.

Then back we go, back to the beginning, when Jerry – literary agent to Emma’s publisher husband – surprises her in her bedroom during a party. When Robert predictably enters the room they laugh it off, but no one in this black farce can ever be quite sure what other people know, including Jerry’s wife, who never appears (there are only four characters, including a waiter). 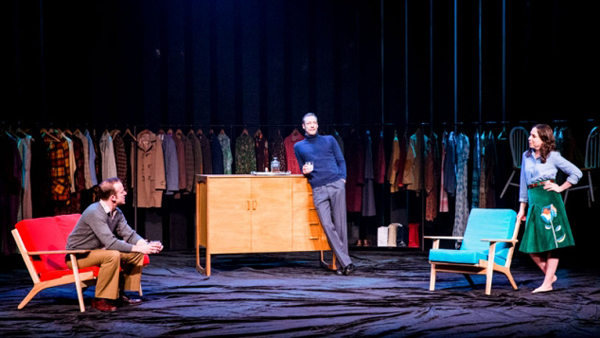 The dialogue, it goes without saying, is knotty and intricate, but with fewer absurdist riffs and feints than we find in earlier plays like The Birthday Party (1958) and The Caretaker (1960).

Fortunately, the production stays in London during the 1970s. The British accents are mostly secure. Alison Bell’s is perfectly clipped, and her frequent, self-conscious laugh captures all of Emma’s often terrified equivocation. Nathan O’Keefe’s Oxonian accent wavered at one point, when Jerry seemed to head back to New York on one his publishing trips, but then he crossed the Pond and rallied.

‘Pinter’s play ... is all about adultery, the subject dearest to his creative heart’

Pinter is at his chilling best when he suspends the dialogue and allows his actors to cogitate or collapse. There are many examples in this production. In the first scene (last scene), Jerry goes off to buy more drinks, leaving Emma alone. This could be the longest of minutes for the actor, and audience, but Alison Bell is riveting as she conveys Emma’s tolerable embarrassment and cheerless pride. Nathan O’Keefe – with his long, bearded face and reddened eyes – was compelling, as when he realised that Emma was about to leave him.

The hushed, suspenseful scene in Venice – when Robert (prone to violence, as we retrospectively know) unmovingly menaces the reading Emma with the knowledge that he knows – was almost excruciating to watch, especially when Robert asks more questions and learns that the affair has been going on for much longer than he thought. Mark Saturno, minatory in the role, is physically rocked by the news. 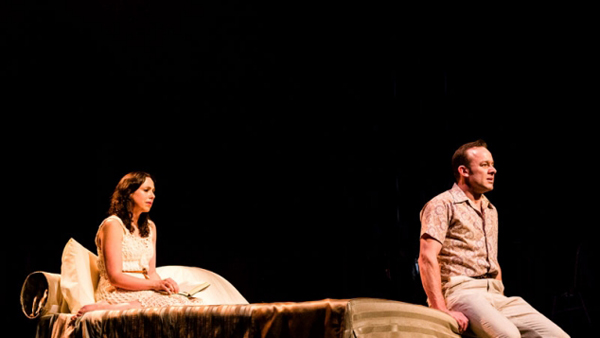 Geordie Brookman’s production is fine, and utterly assured after a long run in Adelaide. Some of Brookman’s touches are very deft, as when Emma – fumbling with her keys in her haste to get away from Jerry and their pointless, passionless flat – ends up throwing them at him. The crucial scene in the restaurant (after Venice, after the realisation) is superbly done, riskily too, as Robert – furious and flaying as the cuckold, spitting out his lines – only manages to stop himself from lurching at Emma’s seducer by assaulting his melone e prosciutto instead. Never have two bottles of Corvo Bianco been emptied so quickly. This scene is every bit as funny as Ben Kingsley and Jeremy Irons’ version in the fine 1983 film version, directed by David Jones.

‘Geordie Brookman’s production is fine, and utterly assured after a long run in Adelaide’

Geoff Cobham’s set is perfectly functional, but the circular rack of clothes that rings the stage and rotates between scenes while the players swap the minimal furniture and put on new clothes (torrid as the 1970s) seems de trop, as do the loud music and flashing lights between scenes. They are jarring in such an admirably subtle production.

One discordant note from the stalls: someone up the back chose to cough all night – convulsive, uncovered coughs. That the sufferer didn’t put us all out of our misery and go home defies belief. How the players managed to go on is beyond me. A long pregnant pause and glare at the coughing cacophanist would have been in order.