As our government prepares to increase our involvement in a Middle Eastern disaster we should never have taken part in, Brecht’s Mother Courage and Her Children seems more pertinent than ever.

The theatre of Bertolt Brecht has always presented a conundrum to directors. In his theory of epic theatre, Brecht declared that, in Martin Esslin’s words, ‘the audience is to be confronted with a body of evidence from which it is to draw its conclusions in a critical, highly lucid frame of mind. The emotions are to be involved only at a further remove.’ But the major plays present such powerful protagonists – Grusha, Galileo, Anna Fierling – and face them with such harrowing dilemmas that an audience is bound to become emotionally involved. Pragmatist that he was, when an actor challenged him with one of his theoretical sayings, Brecht was apt to remark, ‘Who wrote that crap?’ But the balance between the didactic and the emotional is always a challenge for directors of his works.

Nowhere is this more apparent than in the case of Mother Courage. The story of a war profiteer who loses everything she holds dear because of her greed contains one of the greatest roles ever written for an actor and one of the most formidable. If she is played, as several very distinguished British actresses have portrayed her, as a rough as guts but basically loveable ‘character’, the play can come across as a rather sentimental, somewhat melodramatic paean to the indomitability of the human spirit. If, on the other hand, she is presented, as Glenda Jackson did for the Glasgow Citizen’s Theatre, as a venal, rapacious harridan, the play becomes a two-and-a-half hour lecture about the evils of war and of those who batten off it – something one imagines most of the audience might have worked out for themselves before they entered the theatre.

In the filmed version of the original German production (the play was first performed in Switzerland, in 1941), Helene Weigel starts by playing her in a cool, almost offhand, way. Keeping the audience at a distance, she never begs for sympathy, but in the climactic moments she is overwhelming. So when you finally watch this stupid bereft woman dragging her cart off after the soldiers, what you are feeling is not grief for Mother Courage specifically but for all those affected by war and anger for those who cause it.

‘Pragmatist that he was, when an actor challenged him with one of his theoretical sayings, Brecht was apt to remark, ‘‘Who wrote that crap?’’’

Robyn Nevin has walked this fine line before. In her iconic portrayal of Miss Docker in Patrick White’s A Cheery Soul, she gave an unsparing delineation of an irredeemable monster but allowed us to feel pity, not for the character, but for all misguided creatures, including ourselves. All the more surprising and disappointing then that her small-scale, low-key Mother Courage so comprehensively misses the mark. She brings out the woman’s rat cunning and sardonic humour, and her stunned shake of the head when asked to identify the dead body of her son makes for a powerful moment, but in a role which requires her to dominate proceedings she too often disappears into the ensemble, and at the performance I attended she did not seem to be entirely on top of her lines. 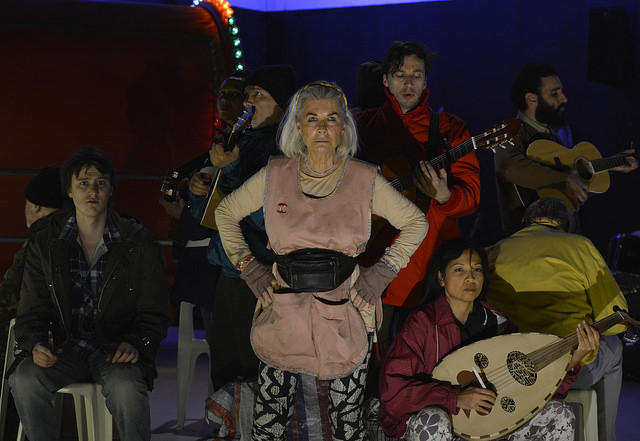 It may have been a case of second night blues when, after the tension of building up to opening night, the following performance can sometimes be looser than it should be, but this textual uncertainty was shared by several of the other performers, to the extent that at times it felt as though we were watching a run-through rather than a performance. Actors raced onto the stage gabbling and shouting their lines as if under the impression that ‘faster and louder’ equalled theatrical energy. In a note to his Mother Courage cast written just before his death, Brecht makes the point ‘our playing needs to be quick, light strong. There is not a question of hurry, but of speed, not simply of quick playing but of quick thinking.’

‘her small-scale, low-key Mother Courage so comprehensively misses the mark’

The performer who stood out is aptly enough playing the one character who benefits from the war. Paula Arundell’s Yvette, the whore who manages to marry well, has a focused energy that is lacking elsewhere, and her rendition of Stefan Gregory’s slinky setting of the Song of Fraternisation is a highlight of the show. 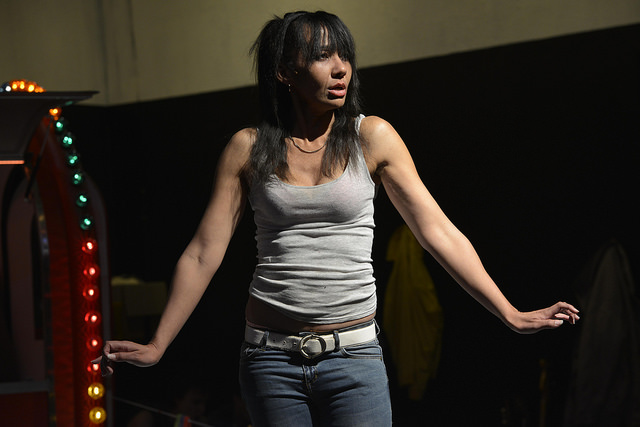 The actors were not helped by Eamon Flack’s clinical production. Robert Cousins’s stark set gave us no sense of the muddy messiness of war, and Mother Courage’s gaudy red cart may have worked as a symbol of the flashy attractions of capitalism, but from a dramatic point of view it seemed unbelievable that it would have survived all the years of war unscathed. Brecht conceived the play as a series of discrete scenes, each with its point to make, but in Flack’s production one scene blurs into the next and we get little sense of the passing of time. The clumsy staging of the death of Mother Courage’s daughter Kattrin robbed the play of its usually sure-fire climax. In the final moments, as Nevin prepared to drag the cart after the advancing army, we were left feeling not so much anger at war as regret for a missed theatrical opportunity.