In Saul Bass’s title sequence for Alfred Hitchcock’s 1959 film North by Northwest, diagonal and vertical lines intersect to form a grid that eventually dissolves to the façade of a New York City office building. Bringing the classic spy caper to the stage for the first time, Melbourne Theatre Company uses that visual switch-up as the inspiration for a long series of objects that double as something else.

Grouped office chairs become a police car, a sofa plays a swerving Mercedes (complete with working headlights) and stacked tables fill in for a death-defying struggle across Mount Rushmore. More impressive still is a video screen showing inventive hand-sized models filmed against Hollywood-style ‘green screens’ from either side of the stage. So when that Mercedes goes careening around a mountain road at high speed, thanks to an intoxicated driver, an actor actually turns a small model of the mountain by hand to create the effect while we watch.

If it seems counter-intuitive to single out the production’s technical specifics before broaching the plot, that whizz-bang approach is every bit as crucial to this staging as the source material of Hitchcock’s lightning-paced yet light-hearted comic thriller. Without such production shortcuts, it’s difficult to imagine the play being able to clamber through all of the disparate settings – from art auctions to cornfields, from a Chicago hotel to a Long Island estate – without sacrificing vital sections. As it is, writer Carolyn Burns, director Simon Phillips and lighting designer Nick Schlieper (the latter two sharing the role of set designer) squeeze in nearly everything, and within a few minutes of the film’s 136-minute length.

Executed swiftly from the opening minutes, the Cold War-era premise is simple: Madison Avenue ad executive Roger O. Thornhill (Matt Day) is mistaken for a government agent, leading to a bewildered interrogation before the shadowy villains attempt to kill him and later settle for simply framing him for murder. The rest of the plot isn’t simple in the least as screenwriter Ernest Lehman challenged himself to link a procession of unconnected high-stakes scenes dreamt up by Hitchcock. Thornhill is thrust from one white-knuckle predicament to the next, though always with a spontaneous quip at the ready. 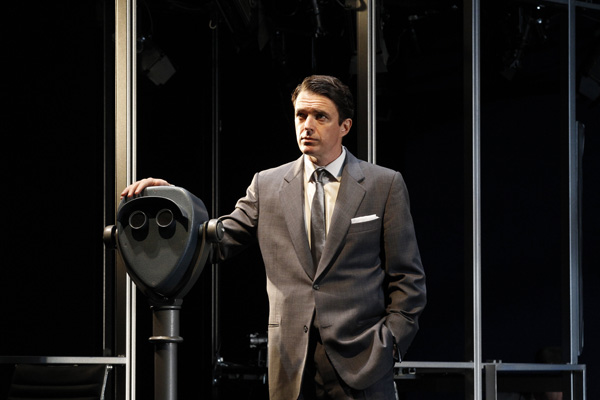 In a film role that Cary Grant imbued with such polished wit, despite Thornhill’s increasingly fraught position as a fugitive fending off police and villains alike, Matt Day slides comfortably into the clean-cut desperation required. If he doesn’t have quite the suaveness of Grant – who does? – he handles both the tangled action-movie tropes and zinging banter with streamlined confidence. Only Day plays a single character throughout, the other actors each juggle up to a dozen different roles. In a story that takes few opportunities to stop for breath, each actor shoulders a vast amount of dialogue (including the occasional European accent, often played for laughs) and relentless physical demands.

As the multi-layered love interest Eve Kendall, Amber McMahon carries off the film’s winking sexualised banter with Day, albeit with moments of stiffness. Other actors hew closer to the film version of their characters, with Tony Llewellyn-Jones a likeable father figure as the Professor, Matt Hetherington toying with his villain’s halting speech as Philip Vandamm and Lachlan Woods standing out as Vandamm’s unusually devoted right-hand-man Leonard. As in the film, Thornhill’s mother Clara – perfectly played by Deidre Rubenstein – steals every scene she’s in; her sighing disapproval is key to the initial comedy. 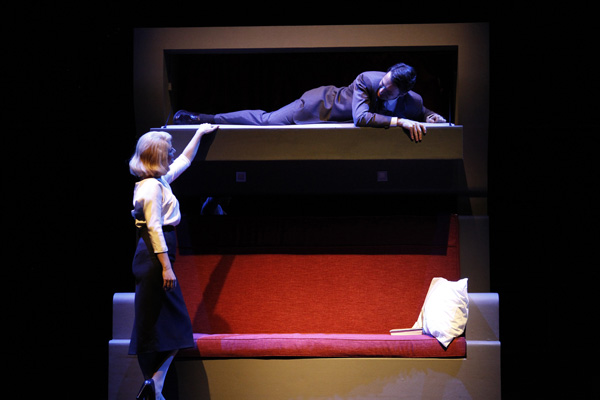 Even as North by Northwest shifts gears into a more serious thriller for its second half, the spirited use of models amplifies the comedy. Take, for instance, the looming foreheads and flaring nostrils as actors play the four US presidents’ heads on Mount Rushmore, or the hilarious items for sale in the auction scene. Other touches are more subtly funny, like a neatly-realised spinning newspaper as exposition and an actor pushing along on a skateboard with a torch to highlight Thornhill escaping out a hospital window. If such clever tactics nearly tip into being over-the-top, as in the famous scene with the crop-duster aeroplane or a toy figurine plummeting to its death, it’s worth those sillier moments to see how inventively so many do-it-yourself effects are achieved.

The dialogue’s comic timing can falter next to the film, but the bulk of the original jokes hold up surprisingly well. Just as much as Hitchcock’s meticulous direction and Bernard Herrmann’s frantic score, those breezy laughs are crucial to North by Northwest enduring popularity more than a half-century later. This bold production may encourage an element of novelty with its childlike playfulness, but its hectic scene changes and in-the-moment effects echo the mounting absurdity of these high jinks. Yet it never descends into farce. Even with its keen comic edge, this adaptation embraces every bit of its gun-toting intrigue.