Every student of Australian art knows that when Arthur Boyd went to London in 1959 and paid his first visit to the National Gallery, two paintings laid siege to his imagination. Titian’s The Death of Actaeon was one from which came Boyd’s tormented Nude and Beast series. The other was Piero di Cosimo’s panel now spiritlessly titled A Satyr Mourning over a Nymph, then known as The Death of Procris. In both cases, the myths were important to Boyd, where the stable relationship of the animal and human world comes adrift. Actaeon, the legendary hunter with his pack of faithful dogs, discovers Diana, Goddess of the Hunt and Chastity – one of the odder combinations of Greek theology – bathing naked with her female entourage. For his gross impiety, Diana turns Actaeon into a stag. His own hounds hunt him down and tear him apart. Sex and savagery collide and awake a deep disturbance within Boyd.

The connection with Piero di Cosimo’s haunting mythology is less familiar. The narrative is key. Procris, jealous of her hunter husband Cephalus, sets out to spy on him in the field, believing him to be unfaithful. Cephalus hears a rustle in the bushes, mistakes it for a wild beast, shoots an arrow into the bushes and accidentally kills Procris. Sexual jealousy and its violent outcome are constant in Boyd’s Bride series. What seized his imagination here was the huge brown dog at the feet of the dead nymph watching in palpable mourning as the satyr brushes the hair from her forehead to reveal her identity. Boyd, then engaged in the Nachlass of the Bride series, used Piero’s dog as the compassionate agent guarding his nocturnal nudes.

Not until I saw the Piero di Cosimo retrospective in Washington this northern spring – it moves to the Uffizi in late June – did I realise how profound the connections were between Tuscan master and antipodean artist. Their minds as much as their art supply the connective tissue. Seventy years ago, Erwin Panofsky, particularly sensitive to Piero – ‘he felt the verdigris of things’ – published a landmark essay on his work, ‘The Early History of Man in Two Cycles of Paintings by Piero di Cosimo’. Two key works were the Metropolitan’s spalliera (long thin panels set into the wainscoting) of The Hunt and The Return from the Hunt. They embody Piero’s obsession with primitivism. In the former, a fire engulfs a wood driving the hunters’ prey into the open, where they are clubbed to death by men and centaurs.

Sylvan meant savage in those primal woods
Piero di Cosimo so loved to draw.
Where nudes, bears, lions, sows with women’s heads,
Mounted and murdered and ate each other raw

Panofsky calls Piero’s ultra-primitive world ‘hard primitivism’ opposed to the ‘soft primitivism’ derived from Hesiod, where the primal state was seen as a Golden Age of Man. Piero’s desperate hunters inhabit a primordial world where ‘creatures have to be ferocious even in their dreams’, where ‘the hands, nails and teeth were the weapons of man’ in Lucretius’ unsparing view. David Franklin, in a catalogue essay, cites Piero as ‘the inventor of the primitive, chaos, the unpredictable ...’ In Australia we might recognise a kindred spirit in Arthur Boyd’s despairing Hunter landscapes of 1943–44. Those homunculi who gather by dark creeks, or as single hunters set out into the sullen wilderness of the bush, recall the inhabitants of ‘the decivilized realms’, as Dennis Geronimus calls Piero’s world.

Both artists found a way out of their bleakness. Piero, rooted in the humanist culture of late quattrocento Florence, knew that the antique offered an escape to a world where men and nature could exist peacefully. Two of his largest and finest mythologies are devoted to Vulcan, the smithy of the gods, the fashioner of the shield of Achilles and the master of the forge. In The Finding of Vulcan on Lemnos, he has been booted out of Mount Olympus and lands on Lemnos, breaking his leg in the fall – hence his perpetual limp. Strikingly, Boydian nymphs comfort the handsome boy with fruit, flowers, and a lamb. When I first saw the picture in Hartford, its beauty and brilliance astonished me, the embodiment of Jacob Burckhardt’s view of the Renaissance as the Discovery of the World and the Discovery of Man. 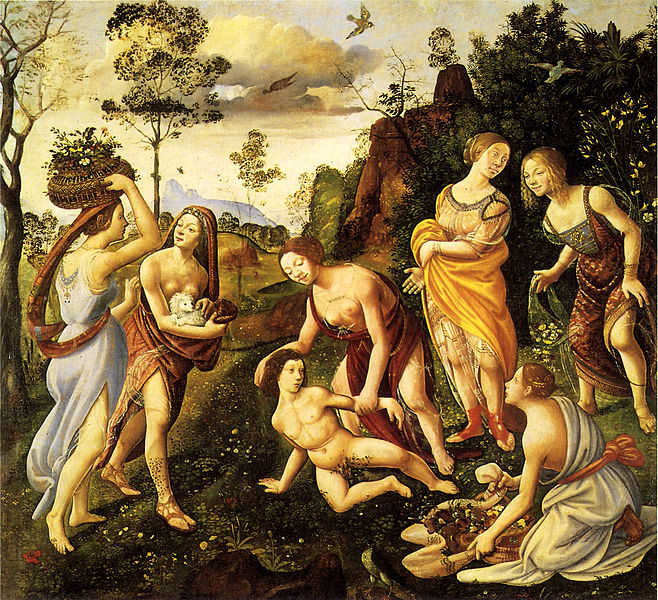 The companion piece, Vulcan and Aeolus, shows Vulcan at work hammering out a horseshoe for a waiting rider. Aeolus, god of the winds, blows gently on the fire now tamed from its raging fury in the forest to the productive forge where the useful products of civilisation are made. (Touchingly, Piero’s father was a metalworker and toolmaker.) In the middle ground, a structure is being built. One labourer uses a crude club, but the other a hammer with a metal head. It is the Lucretian vision of civilisation evolving from one discovery to another.

Boyd parallels Piero’s ascent of man. At the end of World War II, Arthur Boyd painted a grim series of biblical scenes – ‘hard primitivism’ – marking the difficult passage from bondage to freedom. When he turned to the landscape, first around Berwick, later in the Wimmera, windmills, roadways, fences, dams, and the ploughed field replaced the sunless wilderness of the Hunter. Look, we have come through!