Passion and politics often go hand in hand – and never more so than in Don Carlos, arguably Verdi’s greatest opera. Based on the historically questionable play by Friedrich von Schiller, it is certainly the composer’s grandest and most ambitious work and the most demanding of his career. Because of church and state interventions as well as its original length, many revisions were required after its première in 1867.

Opera Australia’s restudied version of Elijah Moshinsky’s 1999 production has retained the elegant sets of Paul Brown, which convey the foreboding magnificence of the sixteenth-century Spanish court. New to the production are the Velázquez-inspired costumes, which add a grandeur and authenticity befiting the scale of the opera. The lighting by Nigel Levings was atmospheric and evocative.

Although Don Carlos was originally a five-act opera in French (commissioned by Paris in 1867), censorship issues forced many subsequent cuts and the removal of the first Act. This led to to a manageable four-act version sung in Italian (without the ballet) and first performed at La Scala in 1884. It is this version which is the one chosen by Opera Australia. The restoration of the first Act in 1886 resulted in the so-called Modena version, which has been the version staged at the Royal Opera House, Covent Garden and many other houses as an alternative to this four-act version of 1884. The Modena version includes the Fontainebleau scene, which explains how Elisabeth de Valois (daughter of the French King Henry II) becomes betrothed to Philip II of Spain rather than to his son Carlos. It is an arranged marriage (Philip’s third) set up to achieve peace between their two countries.* 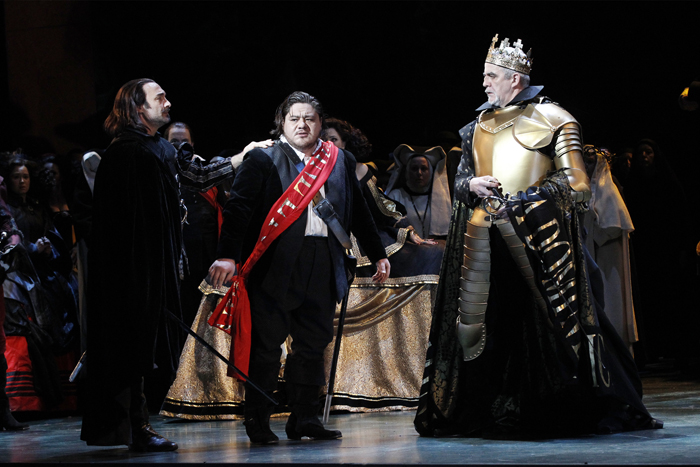 Opera Australia’s cast did justice to the work and the singers were well matched as in an ensemble company. The Carlos of Diego Torre was convincingly sung and acted. His was a passionate and believable Carlos and, after some early problems with an over-enthusiastic orchestra, he rose to every challenge. He proved a fine pairing in the celebrated duets with both Victoria Yastrebova, as Elisabeth de Valois, his stepmother/lover, and José Carbó, as Rodrigo, his friend and supporter. José Carbó’s Rodrigo was in fine form. His rich baritone was constant throughout and he never failed to deliver, both vocally and dramatically. His Act 1 duet (Act 2 in the five-act version) with Carlos, ‘Dio, che nell’alma infondere’, was suitably heart-stirring. The Princess Eboli of Milijana Nikolic was likewise gloriously sung. As the mistress of Philip II and the would-be lover of Carlos, she was sensuous (but regal) with a silky mezzo which never faltered. Her Veil Song (‘Nei giardin del bello’) was exquisite, while ‘O don fatale’ was delivered with the requisite drama and passion. 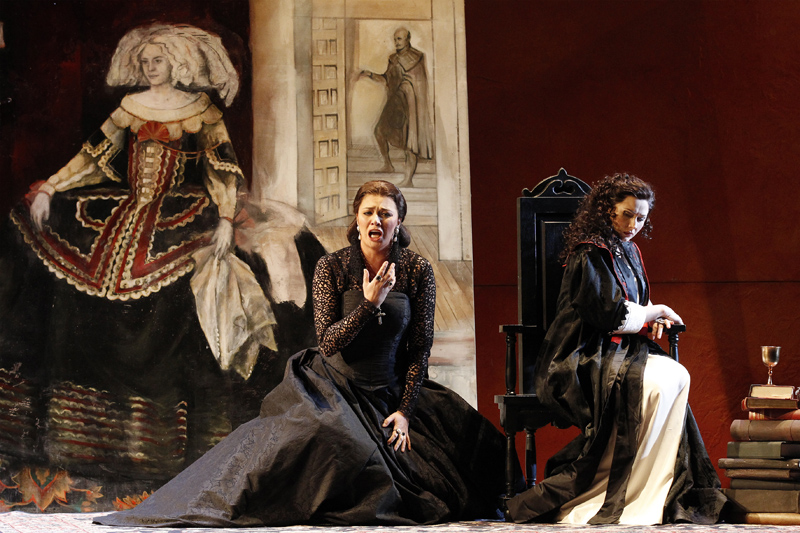 Several of the principals were new to Melbourne audiences. Russian soprano Victoria Yastrebova, making her Australian début, sang with a dark, rich tone and flawless technique. Though not a big voice, it can convey any emotion. Yastrebova looked and acted the troubled Queen to perfection. Her celebrated and tragic final Act aria ‘Tu che le vanità’ was simply beautiful, as were the duets with Carlos. The Philip II of Italian bass Giacomo Prestia was powerful yet sensitive and showed why Prestia has built up an international reputation as a Verdi bass. His soliloquy ‘Élla giammai m’amo!’ was poignant and profound. 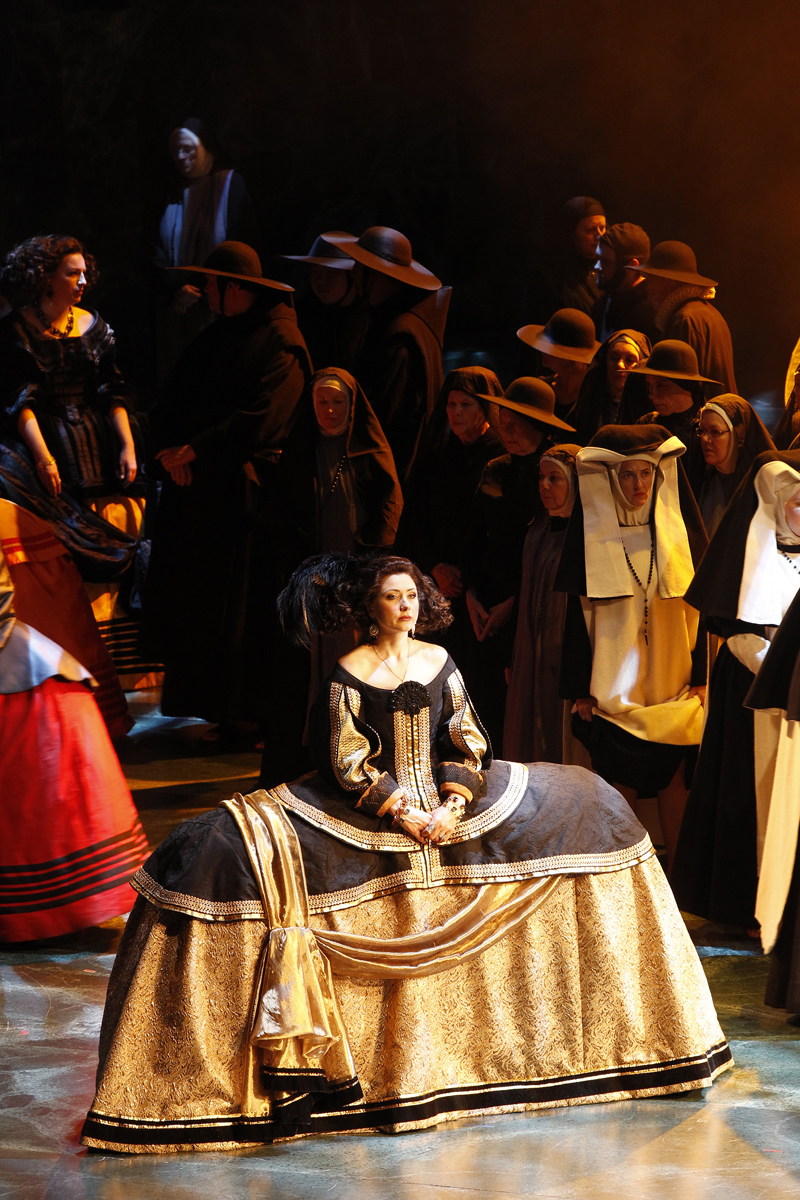 Daniel Sumegi’s Grand Inquisitor was well sung and suitably menacing, whilst the smaller roles were equally well cast, including Anna Dowsley’s Tebaldo, David Parkin’s Frate/Charles V, Jonathan Abernethy’s Count Lerma, and Julie Lea Goodwin’s Heavenly Voice. Orchestra Victoria brought out the subtle contrasts in Verdi’s rich orchestrations and Andrea Licata conducted well for the most part, but in several sections allowed the orchestra to play too loudly. This made it occasionally difficult to hear several of the principals, notably Victoria Yastrebova and Diego Torre.

The stagings were generally excellent and each Act conveyed the drama visually as well as vocally. At times there was rather limited physical interaction between the characters, which led to a ‘stand-and-deliver’ type scenario reminiscent of times past. But the excellent singing and magnificent atmosphere more than compensated as the drama unfolded. The auto-da-fé scene was especially impressive and fitted the State Theatre stage perfectly.

Don Carlos is undoubtedly the highlight of Opera Australia’s year and makes a very welcome and overdue return to the repertoire.

*Luchino Visconti directed the Modena version for the Centenary of the Royal Opera House in 1958, and it has been restaged there many times since. It was conducted by Carlo Maria Guilini, who recorded that version for EMI in 1971 with a stellar cast, including Plácido Domingo, Montserrat Caballé, Sherrill Milnes, and Shirley Verrett. The original and legendary 1958 cast (including Jon Vickers, Gré Brouwenstijn, Boris Christoff, and Tito Gobbi) can be heard in a live performance recorded for the Royal Opera House ‘Heritage Series’ label. Herbert von Karajan opted for the four-act version for his excellent 1979 EMI recording, which featured José Carreras, Mirella Freni, Agnes Baltsa, and Nicolai Ghiaurov, while the best version of the five-act work in the original French was conducted by Antonio Pappano in 1996 and boasts Roberto Alagna, Karita Mattila, Thomas Hampson, and José Van Dam (also recorded for EMI).

Don Carlos by Giuseppe Verdi, directed Elijah Moshinsky, and presented by Opera Australia. Performances at Arts Centre Melbourne, State Theatre May 20–29, the 2015 season continues in Sydney from July 14 to August 15. Performance attended May 20.