Our European summer holiday began in Munich – surprisingly cold and drizzly – perfect weather for long sessions in the Alte Pinakothek. This is one of the more forbidding of the great galleries, with its battered façade showing all the evidence of extensive bombing during World War II and a utilitarian rebuilding by Hans Döllgast in the 1950s.

Once past the desolate foyer, the visitor is confronted with a succession of wonders, despite the fact that presently more than half of the museum is closed for renovations. Needed ones too, perhaps – not just the décor. It is hard to think of a major gallery with laxer museological standards: nugatory information on plastic captions stuck on the frames, with no hint of when the works were created or acquired.

Downstairs, the highlights included paintings by Jan Brueghel the Elder and Pieter Bruegel the Elder, and Paul Bril. Upstairs, half the rooms remain open – unmissable spaces for any visitor to Germany, with masterpieces by Rogier van der Weyden, Hans Memling, Albrecht Altdorfer (the extraordinary Battle of Alexander at Issus), and Albrecht Dürer’s Four Apostles and the remarkable, Christ-like self-portrait in a fur coat.

This leads to one of the greatest series of rooms in any museum, with three Raphaels, including his Canigiani Holy Family, Titian’s Christ Crowned with Thorns, and a Virgin and Child by Leonardo da Vinci, plus Fra Angelicos, Andrea del Sarto, Tintoretto, and Cima.

Below, to compensate for the cruel closures above, the Pinakothek also offers a temporary exhibition of Rembrandt, Reni, Rubens, and Murillo. Such was Rembrandt’s fetish for self-portraiture, he manages to insinuate himself at the foot of the cross, among other holies, in a searing Crucifixion.

The Alte Pinakothek is situated close to three other major museums – the Neue, the Moderne, and the newest of them, the Brandhorst, a magnificent architectural achievement with a façade comprising 36,000 ceramic rods in twenty-three different colours. The Upper Floor is one of the great destinations for admirers of Cy Twombly. One large fan-shaped room is devoted to his ‘Lepanto’ series, twelve paintings created for the 2001 Venice Biennale. Nearby are the ‘Rose Paintings’ of 2008, and there are myriad other oils and drawings and sculptures juxtaposed with the sculptures of a younger contemporary of Twombly’s, Franz West. 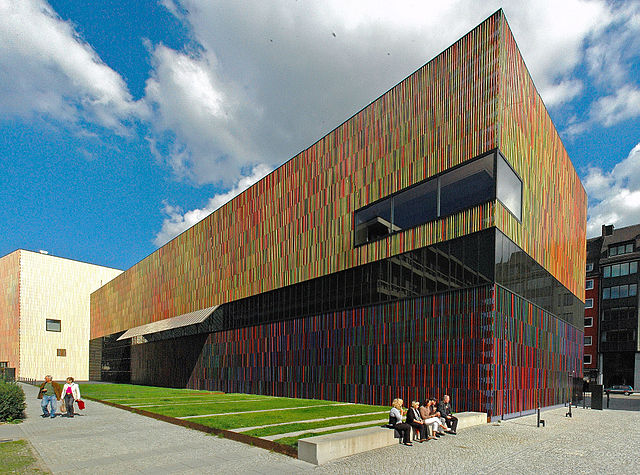 Thursday evening took us to the Staatsoper for Richard Strauss’s Elektra. The opera house, which stands on the great square in front of the Residenz, was rebuilt after the war. The foyers are wonderfully ostentatious, and the theatre itself built on a perfect scale: two thousand pink-backed seats, wooden floors for resonance (no plush here), and five packed tiers above the horseshoe-shaped stalls.

Asher Fisch – well known to Australians, mainly because of his Adelaide Ring in 2004 and his work in Perth – led the Bayerisches Staatsorchester. This was a magnificent rendition of Strauss’s great score, still shocking and arresting 106 years after its premières in Dresden and then Munich. All the glories of Strauss’s score were on show, every dissonance and nuance and violent crescendo. Because of the theatre’s perfect acoustics, there was no need to exaggerate or to melodramatise. How good it would be to hear Salome in this house, the second opera Strauss went on to create with his great librettist, the cultivated and hyper-critical Hugo von Hofmannsthal. (After all, Strauss seasons in Munich go back as far as 1910.)

Of the commonly held view that Elektra ‘marks Strauss’s most advanced position along the road to atonalism’, Gustav Kobbé writes:

To take this view is to misunderstand Strauss’s pragmatic method of composition, which in the musical language of Elektra is entirely apposite to its subject, but, even so, there are occasional lush Romantic harmonies to be heard at appropriate moments.

Herbert Wernicke’s production is now almost twenty years old, but it’s hard to imagine it being replaced soon. The minimalist set is beguilingly simple. A huge black Rothkoesque panel, close to the pit, gives the singers acoustical security throughout this scorching opera.

The panel is tilted slightly at first to allow the squabbling serving maids to hurl insults at the murdered Agamemnon’s outcast daughter Elektra. Later, in the second major development, the panel is slowly and flamboyantly raised to reveal a highly neurotic Klytämnestra standing on a long red endless staircase, truly a staircase to nowhere.

‘All the glories of Strauss’s score were on show, every dissonance and nuance and violent crescendo’

The costumes are simple and unadorned: black for Elektra, white for her sister Chrysothemis, and a chic red for the murderous mother, Klytämnestra.

Elektra, taunted by the serving maids, lies on the small tilted dais on which she spends most of the evening. The great Danish singer Iréne Theorin remained prostrated through her opening aria (‘Allein! Weh, ganz allein’). Her expression hardly changed all night, the broad, whitened face a fixed mask of terror and startlement and matricidal intent. Her brilliantly made-up eyes did all the acting for her. When Klytämnestra finally, warily embraced her daughter, Elektra’s appalled pat on her mother’s head was a mini-masterclass in stagecraft.

Theorin – a famous Elektra – was in superb vocal form, ringingly powerful during the frequent climaxes and never overwhelmed by the huge orchestra, but also capable of the most exquisite pianissimo singing, as during the scene with Klytämnestra. Few Elektras are capable of such risky, nuanced singing. 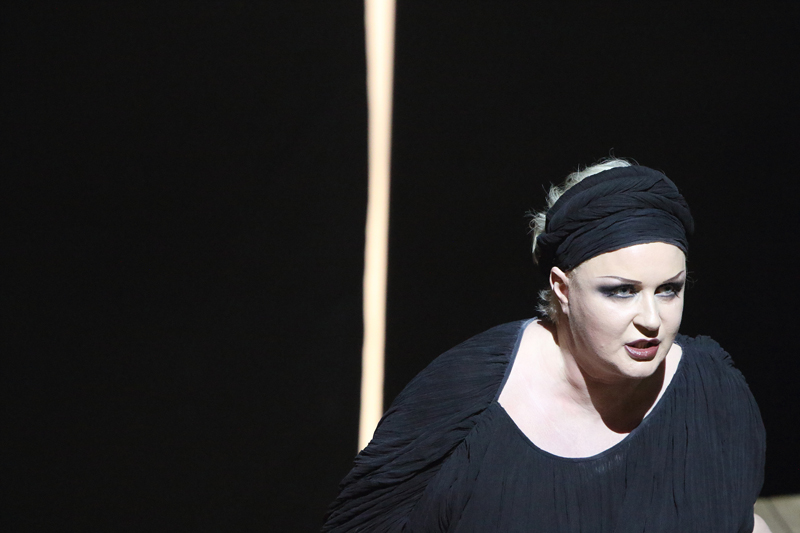 Waltraud Meier – one of Germany’s finest singers for many years, and a famous Isolde and Sieglinde in her time – was magnificent to watch: another surpassing stage actress. Her long, twitchy approach to her daughter’s dais was mesmeric. Meier’s voice is no longer immense, and her initial entrance on the distant staircase did her no favours, but when she needed them the notes were authoritative, and, as with the other singers, there was no hint of a beat in the voice.

Ricarda Merbeth, opposite two such instinctive stage animals, gave a more conventional performance as Elektra’s sister Chrysothemis. Her singing, though never inexpressive or unmusical, was less electrifying than Theorin’s at first; but when she returned at the end of the opera, inflamed by Klytämnestra’s murder, Merbeth gave an astonishing performance of sustained, full-throated soprano singing, and very nearly stole the show.

Orest, appearing in one of the opera boxes to the left of the stage in a black three-piece suit, was magnetic as he cautiously greeted his unsuspecting sister. Günther Groissböck, a young singer, has a powerful and agile bass-baritone. Stepping on stage down a steep ladder (the only prop), Orest gradually apprises Elektra of their relationship. The recognition scene that follows, one of the chief glories of this opera with its tender Agamemnon-inspired theme, elicited some of the most exceptional orchestral playing of the night. It was an immensely stirring passage.

What Herbert Wernicke does then is quite brilliant. Reconciliation effected, Orest forbears any fraternal tenderness and begins to plot his own personal ascension. The long florid crimson robe left behind by Klytämnestra – based on the famous Staatsoper stage curtain (not deployed on the night) – becomes Orest’s destiny, and his play with the robe at the end of the opera, even the suggestion of a Nazi salute, ever radical in Munich, was proof of Orest’s rigid monomania – even as Elektra, alone on her dais and eschewing the wonted dance of exultation, swung the axe wildly as if to bury it in the audience, and lonelily rehearsed her own self-destruction.

Elektra, composed by Richard Strauss with a libretto by Hugo von Hofmannsthal, was performed by the Bayerische Staatsoper at the Nationaltheater of Munich. Performance attended 21 May 2015.