It was refreshing, to say the least, that two sets of concerts given by the Sydney Symphony Orchestra in the Opera House in mid-February had the symphonies of Robert Schumann as their theme. With two symphonies assigned to each program it was possible in less than a week to hear the entire standard representation of Schumann as a symphonist. The refreshing elements in this plan included its escape from programming formulas and its reflection of the evidently genuine wish of David Robertson, the SSO’s chief conductor and artistic director, to demonstrate that the current representation of Schumann’s symphonies in orchestral concerts understates their worth.

Robertson’s zeal did not take the form of showing how renewed and how individual Schumann’s orchestral language can appear if its original scoring is freed in large part from the additions of conductors like Mahler and Felix Weingartner or from the composer’s own safety-first additions (particularly in the D minor symphony, usually numbered 4). Robertson’s major concerns were energy in attack, rhythmic clarity, and unified dynamics, elements of playing he is well equipped to secure. Those of us who remember his performances in Paris some years ago at the helm of the Ensemble Intercontemporain in succession to Pierre Boulez are not surprised by his exceptional grasp of fine details of timing and balance.

‘Robertson’s major concerns were energy in attack, rhythmic clarity, and unified dynamics, elements of playing he is well equipped to secure’

Schumann’s thematic freshness and memorability rarely fail to make their mark, nor did they do so in these performances, but this composer’s transformation of themes often takes a more subtle form, declaring itself on occasion as a series of developed echoes rather than as a continuous process of change (this last procedure being particularly familiar to us in the most compelling passages of Beethoven’s symphonic invention).

Some of Schumann’s bluff horn and brass themes (in the first and third symphonies), while instantly attractive, may need the elated sureness they received (almost unfailingly) in these performances, to stir the imagination after several hearings; but one work at least, the C major symphony (numbered 2), is a score of limitless rewards. Its slow movement, combining a plangent intimation of late Wagner with the pacing certainty of contrapuntal figuration that Schumann took from his long and thorough study of Bach, is beyond rivalry and is surrounded by vigorous movements that enhance its perfection.

No one questions Schumann’s mastery in song and solo piano music and in the best of his chamber music. Though much is sometimes made of the fact that it was his brilliant pianist wife, Clara, who repeatedly urged him to qualify for greatness by composing orchestral music, a genre characterised by prominent contemporaries in such terms as ‘the grandest species of musical creation’, there was no hesitation or diffidence in the way he hurled himself at the joyous task of writing his ‘Spring’ symphony (numbered 1), sketching the work in four days and nights and finishing the orchestration a month later. Few of Schumann’s major contemporaries could have matched such a feat. Even his Leipzig-based friend and ultra-professional musical colleague Felix Mendelssohn, who directed the work’s first performance, must have been impressed.

The problems (and rewards) experienced by Schumann were also prominent in the career of Hector Berlioz. Each of them had pronounced literary talents as well as conspicuous musical gifts. They both understood their place in the grand succession of classical and romantic styles at the same time as they initially lacked the kind of knowledge of music acquired from childhood as a lifelong trade. Nineteenth-century pedants punished them by declaring that Schumann did not know how to score orchestrally and that Berlioz (who certainly did know) displayed his knowledge in an unacceptably noisy way and committed the cardinal sin of writing false basses. 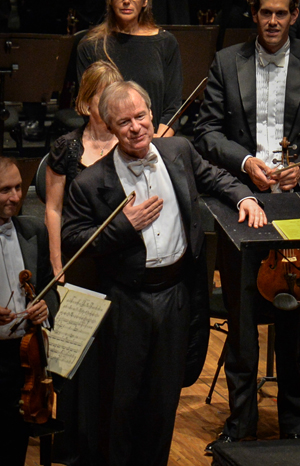 The SSO found a happy programming parallel to the close association of Mendelssohn with the Schumanns in electing to follow Schumann’s first and second symphonies with the Mendelssohn violin concerto. The soloist was the German violinist Christian Tetzlaff, who applied himself to his task with a gestural scope that might have been initially thought appropriate to a suffering Christ figure from a medieval carving.

The performance that followed more than warranted its visual passion, not least in those moments when Tetzlaff showed how solo violin tone could be thinned to a thread of sound without seeming to lose a particle of its acoustic life, audibility, and expressive character. Robertson’s skilful adjustment of the orchestral share of this lyrical masterpiece was an important element in rousing the audience to stamping, spontaneously full-throated recognition of the exceptional nature of the solo performance.

Tetzlaff was again the soloist in the second Schumann program, interposing an exuberantly inventive concerto by a contemporary German composer Jörg Widmann between symphonies 3 and 4. Widmann’s manner in this one-movement work is to include what seems like every possible violinistic effect and contrast in close succession; so much so that Tetzlaff kept a score in view, attended by an efficient page-turner. It says much for the belief in the music expressed by both soloist and orchestra that the concerto was heard attentively and applauded with appreciation.

Leave a comment
Roger Covell is Professor Emeritus in the School of English, Media and Performing Arts at the University of New South Wales. He was principal music critic at The Sydney Morning Herald from 1960 until the late 1990s. He is the author of Australia's Music: Themes of a New Society (1967). He won the Pascall Prize for Critical Writing in 1993. In 2013 he received the Sir Bernard Heinze Memorial Award for his contribution to music in Australia

Leave a comment
Roger Covell is Professor Emeritus in the School of English, Media and Performing Arts at the University of New South Wales. He was principal music critic at The Sydney Morning Herald from 1960 until the late 1990s. He is the author of Australia's Music: Themes of a New Society (1967). He won the Pascall Prize for Critical Writing in 1993. In 2013 he received the Sir Bernard Heinze Memorial Award for his contribution to music in Australia