In May 1957, with some trepidation, Tennessee Williams went into analysis under the care of the fashionable psychiatrist Lawrence Kubie, known to his distinguished clientèle as Dr Sugar. Kubie insisted that Williams should temporarily separate from his partner of the time, Frank Merlo, and give up drink and writing. With a sense of relief, Williams banished the tempestuous Merlo to Florida and even managed, for a short while, to stop drinking, but the compulsion to write was too strong to break. ‘I was bored not working,’ Williams said. ‘I began to cheat. I’d get up at four, type a few hours and then I felt fresh. The doctor finally surrendered.’ The result of this early-morning compulsion was Suddenly Last Summer.

The analysis stirred up those feelings of remorse and guilt about his family that were never far beneath the surface. The one constant love in his life was his sister, Rose, who, as a disturbed young woman, had horrified and embarrassed their mother, Edwina, with her aggressive and sexually overt outbursts. After various forms of treatment had failed, Edwina finally arranged for Rose to have a lobotomy, a procedure that was then in a very early experimental phase. For the rest of her long life – Rose outlived both her mother and brother – Rose existed in a twilight state of bewilderment. During his sessions with Kubie, Williams confronted both his anger towards Edwina for arranging Rose’s mutilation and his guilt with himself for not coming to his sister’s defence and preventing it.

In Suddenly Last Summer, Williams addressed these issues head on. The matriarch, Mrs Venable, is willing to go to any lengths to protect the reputation of her dead son, Sebastian, even if it means bribing a young doctor to lobotomise her niece Catherine to prevent her revealing Sebastian’s true nature. She needs to get Catherine’s mother’s permission for the operation and threatens to delay probate on Sebastian’s will, in which he leaves a considerable amount of money to Catherine and her rapacious brother, George. In order to force the issue, she summons everyone to the hot house in her Garden District mansion.

Williams conceived Suddenly Last Summer as a sort of fever dream, and Kip Williams’s production expertly builds on this conception with imaginative use of video and music. The first scene, between Mrs Venable and the doctor, is projected onto a huge white wall. The camera peers at them through the lush tropical foliage of the hot house as Mrs Venable attempts to charm and bribe the young physician. With the arrival of Catherine, the set revolves and we see both the actors and the video crews who follow them around like high-tech kuroko, the black-clad stagehands of kabuki theatre. Our attention shifts continually from the projected images of the actors to their actual forms. Far from being distracting, this creates a dreamlike sense of dislocation. At the climax of the play, when Catherine, under the influence of a truth serum, reveals exactly what happened to her cousin, a camera shakily follows the image of a doomed Sebastian racing through the bowels of the Drama Theatre. The final minutes of the play are shattering. 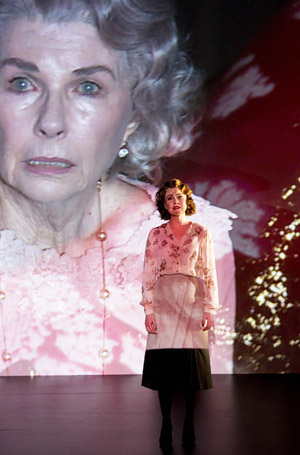 Brilliant as the technical aspects of this production are, they would be to no avail without a group of actors who were up to the ferocity of the play. Thankfully, the Sydney Theatre Company has put together a superlative cast. When minor roles are played by actors of the calibre of Paula Arundell and Melita Jurisic, you know that this is a production that has been cast from strength. As Catherine’s minder, Sister Felicity, Arundell is all rigid authority, while Jurisic makes much of Mrs Venable’s put-upon secretary Miss Foxhill. Brandon McClelland is suitably loathsome as George, and as Catherine’s mother Susan Prior gives us a woman totally out of her depth as she is pushed towards a decision she dreads to have to make. In the somewhat thankless part of Dr Cukrowicz – who, in homage to Kubie, Williams has Mrs Venable christen Dr Sugar – Mark Leonard Winter has a quiet intensity which works well in contrast to the emotional turmoil of the other characters. Kubie himself wrote to Williams that he considered Cukrowicz to be the most accurate portrayal of a psychiatrist he had seen.

Too many actresses have succumbed to the temptation to turn Mrs Venable into some sort of melodramatic gorgon. Robyn Nevin resists the urge to chew the scenery and shows us the woman’s vulnerability as well as her steel. Her acid asides are very funny, but the projected, close-up look of horror, acknowledgment, and despair on her face as she listens to Catherine’s story is truly haunting.

Catherine Holly is an Everest of a role, and Eryn Jean Norvill manages to scale the heights. In contrast to Elizabeth Taylor’s rather hard-boiled film version, Norvill is softer and more fragile, but she has all the emotional authority needed to power her way through the final scene of the play. 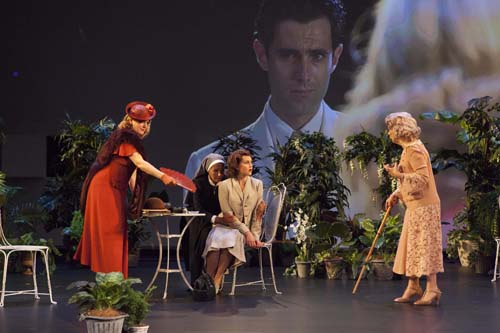 There has been much use of video in Sydney theatre recently, not all of it entirely successful. But here the combination of powerful acting and technical excellence that is truly at the service of the play has delivered a triumph.