For many of us – those of us not in the Farnham faction – this was our first visit to the Palais Theatre in three decades. (It has mostly been used as a rock venue since the Australian Opera decamped.) So there was much anticipation before the opening night of Victorian Opera’s The Flying Dutchman, perhaps the most ambitious production in the company’s ten-year history.

The Palais, it must be said, is showing its age (it was rebuilt in the 1920s after a fire). Not even Joan Sutherland (who sang there many times in the early 1980s) could have hoped to fill the Lounge (a stratospheric dress circle that seats about 2,000 people on its own; the theatre’s total capacity is just under 3,000). Time’s ravages have not impaired the fabulous acoustic. The vast pit, the grand proscenium, the closeness to the stage of the wide, curved Lounge, offer an absorbing theatrical experience. It was great to be back there, fire traps and flaking domes notwithstanding.

Opportunities to enjoy Richard Wagner’s early music drama are few in Melbourne. The Melbourne Symphony Orchestra, under Oleg Caetani, gave us a concert version in 2008, with John Wegner as the Dutchman and a young Stuart Skelton as Erik. So this new Victorian Opera production was welcome.

‘Time’s ravages have not impaired the fabulous acoustic’

Wagner was familiar with the legend of the Flying Dutchman from Heine’s autobiographical novel Memoirs of Herr von Schnabelewopski (1834). According to Michael Tanner: ‘Wagner took from Heine, but without the irony – Wagner is the least ironic of artists.’

Few operas were conceived in more romantic circumstances. Wagner was twenty-six in 1839 when, fleeing from Riga, he stowed away on the merchant vessel Thetis with his first wife, Minna, and their Newfoundland dog. After a terrifying storm the ship sought refuge on the Norwegian coast. A pilot assumed control and guided them to safety through the rocks projecting from the sea. The effect on the young German composer was electric, unforgettable:

in a very short time I was to have one of the most marvellous and most beautiful impressions of my life … A feeling of indescribable content came over me when the enormous granite walls echoed the hail of the crew as they cast anchor and furled the sails. The sharp rhythm of this call clung to me like an omen of good cheer, and shaped itself presently into the theme of the seaman’s song in my Flying Dutchman. The idea of this opera was, even at that time, ever present in my mind, and it now took on a definite poetic and musical colour under the influence of my recent impressions.

Wagner’s Der fliegende Holländer – initially intended for Paris – was first heard in Dresden, in 1843. He revised it for Zurich in 1852. The great perfectionist later disowned the opera. In a letter to Liszt he wrote: ‘I, as an artist and man, have not the heart for the reconstruction of that, to my taste, superannuated work, which, in consequence of its immoderate dimensions, I have had to remodel more than once. I have no longer the heart for it, and desire from all my soul to do something new instead.’ The opera, presumably because of this aversion, did not reach Bayreuth until 1901, long after his death, when Cosima Wagner insisted on its being performed without a break (Wagner’s stated wish) – quite a long night in the theatre (we were let out once, to enjoy the sea breeze and the shrieks from Luna Park).

Immoderate dimensions aside, the opera boasts some unassailable things: one of his great overtures, the Steersman’s song, the Dutchman’s Act I aria ‘Die Frist ist um’, the Spinning chorus, Senta’s Ballad, her duet with the Dutchman.

Oskar Hillebrandt as the Dutchman, Warwick Fyfe as Daland, and Carlos E Bárcenas as the Steersman in Victorian Opera's The Flying Dutchman (photograph by Jeff Busby)

The opera, like the personal crisis, is set on the Norwegian coast. The eponymous hero has tried to round the Cape of Good Hope in a furious storm; he swears he will do so even if he has to keep on sailing forever. The devil, overhearing this hubris, condemns him to sail until Judgment Day, with no release unless he can find a woman who will love him unconditionally. Every seven years he can go on shore to find her. Thus we are introduced to the embryonic redemption theme and the hapless glorification of the eternal feminine.

The orchestration is violent, surging, seething. Motifs make their first appearance, pounding away at the aural consciousness. Writing about the opera, Michael Tanner is eloquent as ever:

There may be no other example of a composer so suddenly moving from competence in various idioms of his day to commanding mastery which was partly rooted in tradition, but equally impressive for its necessary departures from it.

Victorian Opera’s collaboration with Deakin University’s Deakin Motion.Lab (the first of several) is absorbing and totally suitable for this most protean and renewable of composers. Throughout the opera there is a 3D scenography, never more suggestive than at the end, when the Dutchman opts for renunciation in the deep and Senta follows him. The closing images (observed through thousands of 3D spectacles) complement the closing strains of the opera, such an eerie portent of Brünnhilde’s elected fate in Götterdämmerung.

Onstage, however, there was at times a distinct want of direction, especially with the principals. For several awkward minutes in their Act II duet, the Dutchman and Senta remained motionless, as if stranded. Paradoxically, when the chorus (in excellent voice) appeared, everything became mobile, boisterous, convincing – especially at the start of Act III, when Wagner gives Daland’s crew one of his finest choruses, dispelling any notion of an incapacity for melody. Earlier, the mocking, bobbing spinners of Act II provided a witty counterpoint to Senta’s endless agonisings. This was clever theatre, alert and alive.

The singing, it must be said, was variable. Oskar Hillebrandt (the Dutchman) was not in good voice and seemed uncomfortable all night, as if indisposed, with a wide vibrato. Lori Phillips (our American Senta) was superlative throughout and coped magnificently with Senta’s sustained legato singing. After an assured Ballad, Phillips rose to great heights in the duet with the Dutchman and the subsequent one with Bradley Daley (relishing his high notes as Erik). It is no wonder that Phillips won plaudits in Seattle as Brünnhilde. How fine she would be here too, if Opera Australia succeeds in raising the many millions to stage another Ring. Imagine a bayside Ring, away from the subterranean bourgeois plush of the State Theatre. 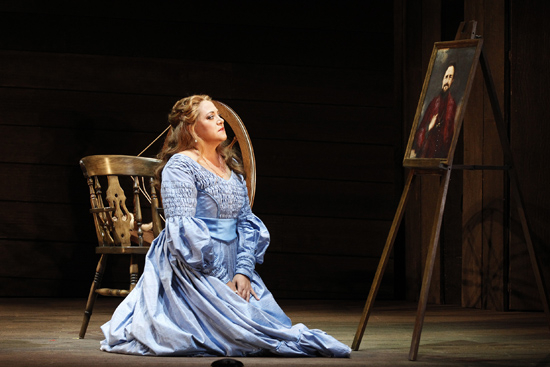 One of the clear stars of the night was the Australian Youth Orchestra (in its first fully mounted opera perhaps). From the first arresting note of the Overture, the orchestra was in mighty form in the capacious pit; it deserved the rowdy ovation at the end. What an experience for these young musicians, performing Wagner in this setting, under Richard Mills. Their brio and musicianship gave this performance real energy and commitment.

There are two more performances of this enterprising production, which will move to Perth later this year. Cheap tickets are available: $30 for those under thirty (admirable pricing). If you love spectacle and emotional extravagance in a truly theatrical setting, don’t miss The Flying Dutchman. With its 3D projection, an outstanding Senta, and our brilliant national orchestra of young musicians in the pit, it is an ideal entrée for those new to opera and a memorable night for all Wagnerians.