A play in which two characters metaphorise the complex relationship between China and Australia does not sound very promising. We have seen this sort of thing before, not always happily – in the blue corner a lovably cantankerous professor representing ‘science’, in the red corner a cheery troglodyte who is ‘faith’ incarnate, and so on and on into the worst dinner party you have never been to; dichotomous, diaphanous, disastrous.

In Kryptonite’s red corner is the Chinese-Australian Lian (Ursula Mills), an undergraduate at a university in Sydney in 1989 when the tanks roll into Tiananmen Square, and a successful businessperson at a transnational mining company a decade and a half later. In the blue corner is Dylan (Tim Walter), an easy-going surfer when we meet him, a swashbuckling environmentalist as the years fall away, and finally, in a familiar mould, a mealy-mouthed and compromised senator.

Dylan, though mindful of his idealising of Lian’s ‘exoticness’, is smitten from the outset. The introverted Lian, effectively stalked by Dylan while she works nights in a Chinatown greasy spoon, eventually opens up over a few stubbies of VB. A halting pas de deuxensues, as the play slips back and forth between 1989 and the present day, moments of intense desire and connection erupting at a conference here, a party there, only to be dulled by pragmatism, political expedience, the shadows of other lovers, or some difficult-to-define tentativeness that always seems to stall the dance’s conclusion. In the end, only one question remains: was it love that kept Lian and Dylan within each other’s orbit for twenty-five years, or something altogether more calculated?

And so it is with the Sino–Australian relationship in the years 1989–2014, for every step towards greater cultural and economic integration there is a Clive Palmer outburst about ‘mongrels’ who shoot their own people, and a furore over Australia’s complicity in the United States’ militarised ‘pivot to Asia’. The great strength of Sue Smith’s writing is the subtlety with which she executes this marriage of form and function, and the conceptual rigour that underpins it. No crude dualisms are in evidence, just as there is nothing loose about the play’s overarching metaphor. This means, at a surface level, that the point never needs to be exaggerated. Instead, it is, in Smith’s phrasing, the ‘story of two people who want – more than anything else in the world – to be able to simply love each other’ that occupies the mind, and, occasionally, the heart, while the work is in train. 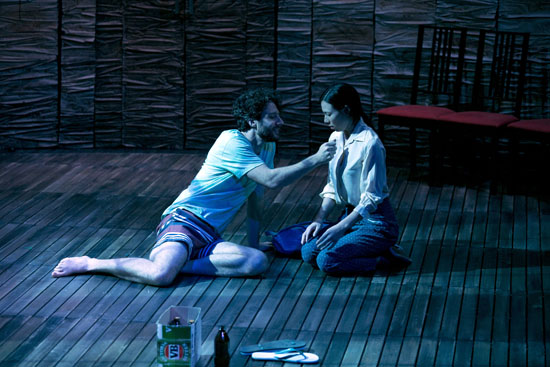 The audience’s job is made easier in this respect by Ursula Mills’s masterly performance. Walter is good, too, but ultimately not in the same class. Vocally, he seems held back (a result, perhaps, of the production’s previous month-long Sydney run), whereas Mills is both technically consummate and psychologically insightful. That the script’s few cultural clichés are minimised by a hard sense of reality undoubtedly assists Mills in her fleshing-out of three full dimensions for Lian, but it is her physical and, especially, emotional suppleness that make the difference. Watching Mills, one is never under the impression that one is watching a cipher but only, critically, an entirely living product of the imagination and of the actor’s craft.

‘No crude dualisms are in evidence, just as there is nothing loose about the play’s overarching metaphor’

Victoria Lamb’s set, employing a slatted wooden floor, panels of crumpled paper, and a semi-circular network of beams that hints at Chinese pagoda-style architecture, has been astutely conceived and constructed, and allows for some spectacular lighting effects by Nicholas Rayment. DJ Tr!p’s score – all electro-washes and bassy bleeps – is a fine, if somewhat colourless, accompaniment, and, surprisingly, makes no discernible gestures towards Chinese music of any kind.

Geordie Brookman’s direction is, I think, as good as it has been since he became STCSA’s artistic director in 2012, his familiar Brechtian flourishes (here, for example, the actors paint on the set the year in which each scene takes place) a seemingly more natural fit for Smith’s writing than, say, for Chekhov’s. Brookman also knows how to build a work, to catalyse its most emotive elements in good time; the footage of the Tiananmen Square protests that fill multiple television screens during the play’s climax remains viscerally moving on its own, but Brookman, having the set partially collapse to expose the images, wastes nothing in ensuring the impact seems fresh.

There is a moment in Kryptonite when Dylan, enraged by what he sees as Lian’s opaqueness, invokes Kevin Rudd’s notorious aside at the 2009 Copenhagen Climate Change Conference to the effect that ‘Chinese fuckers’ were trying to ‘rat-fuck us’. Rudd, well known at the time of his blow-up as a fluent speaker of Mandarin, seemed to embody, while prime minister, the contradictions that shape Chinese–Australian relations in the so-called ‘Asian’ century: warm embrace on the one hand, stigmatising distrust on the other, and, along the sutures in between, the cold glue of trade and finance. 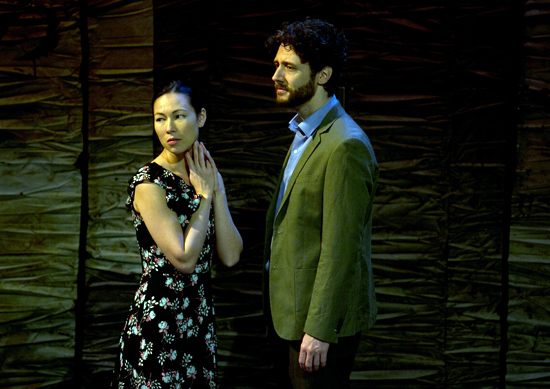 Smith’s play is a finely crafted attempt to reconcile, or at least take stock of, these contradictions. It comes at a time when their vociferous interplay seems to be occupying more, rather than less, space in the national conversation. I wonder what the addition of another twenty-five years would do to Lian and Dylans’ stories, to the eminently combustible mix of proto-democracy, totalitarianism, and capitalism in China, to the vituperative political discourse in this country around our Asian neighbours. Smith, I suspect, thinks us under-prepared for this next quarter-century – puzzled by the present and forgetful of the past. Her play reminds us that our principles are too easily lost in the cut and thrust of history and personal ambition, and that their successful transmission between individuals, generations, and cultures is entirely conditional: ‘Give me your ideals,’ Dylan tells Lian. ‘Put them in my hands. I’ll keep them safe.’ The words have the quality of a prayer as well as a promise.