Four white students and a gun wait in a room overlooking the street through which the prime minister will pass. Kill the PM, liberally adapted from Fyodor Dostoevsky’s Demons (1872) by Fregmonto Stokes, and directed by James Dalton for Unhappen, is terse and arresting theatre.

The Old 505 Theatre is one of the handful of venues in Sydney genuinely amenable to independent theatre. The place has its flaws, but Stokes, Dalton, and the designers Dylan James Tonkin and Benjamin Brockman have shaped the work to it consummately. Perched atop the graffiti-frescoed squat Hibernian House, you enter through an unmarked door, and ascend in a dubious elevator. Wreck and debris abound; graffiti carries decaying faces, ironic slogans, and here and there a line from Paul Celan. The theatre is an unlived room. Stray furnishings lie draped in plastic among UV lamps and a stepladder, a forgotten renovation. The window overlooks Elizabeth Street. The press of the city asserts the reality of the society being criticised, and one imagines an emaciated, tattooed Raskolnikov pacing the walls and muttering about vinyls and craft-beer. It is an ideal theatre for a play in turn frenetic and claustrophobic, desolate and farcical. 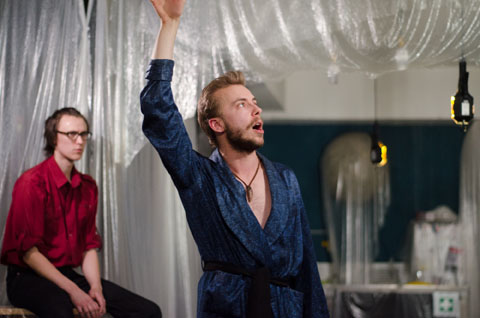 The conspirators are an unlikely bunch, but that’s the point. These would-be terrorists are not Nechaev, they have not suffered oppression, nor are they agents of a vast organisation. They are dilettantish kids who, at each point, half-expect radicalism to be a fad. Rowan, played by Nicholas Hiatt, corresponds loosely to Kirilov, with a hint of Pyotr Verkhovensky’s mesmerism. He mainlines caffeine, wears a dressing gown, and is convinced that the managerial class is literally reptilian. Rowan’s dizzy charisma and fleeting, pathetic lucidities are masterfully navigated by Hiatt. Zoe Jensen plays Flick, the least likely conspirator. Flick’s ambivalent, painfully bright-eyed stereotype of leftist youth corresponds rather clumsily with certain of Shatov’s qualities in the novel. She intones mantras and the Lord’s Prayer in the same panicked breath. Naomi, played by Lily Newbury-Freeman, is grounded, moral, and philosophically minded. Stokes has shaped her out of the character arc of Shatov, and a little of the innate dignity of Stavrogin. Naomi is the cell’s moderating force, and moral compass.

'It is an ideal theatre for a play in turn frenetic and claustrophobic, desolate and farcical'

The mastermind of the operation is Peter, played by Michael McStay. Stokes has channelled into this character both Stavrogin’s impenetrable and laconic sangfroid, and Pyotr Verkhovensky’s chilling duplicity. Peter is the only member of the group who articulates a coherent argument for the planned attack, and whose resolve does not waver. Both these impressions being undercut by later developments, the emergent flaw of this production is that it often seems to patronise its own characters. There are furious spiels decrying late capitalism and white privilege, but these are interspersed between discussions of the latest festival, delusions about amphibians, and attempts to call the panic line. Their arguments lack bite, and resile too easily from the premise implicit in the title: the possibility of a moral imperative to assassination.

The nightmarish moments of the novel find correlatives in Dalton’s signature brand of surrealism – last year’s The Lightbox featured a psychiatrist made of spoons – which is both thrilling and consistently bolder than most things to be seen on Sydney’s main stages. I did occasionally find the dreamscape elements detrimental to the genuinely compelling situation earlier established, but their whimsy is catching. While imperfect, Kill the PM is a subtle and provocative confrontation with the alternatives to apathy. 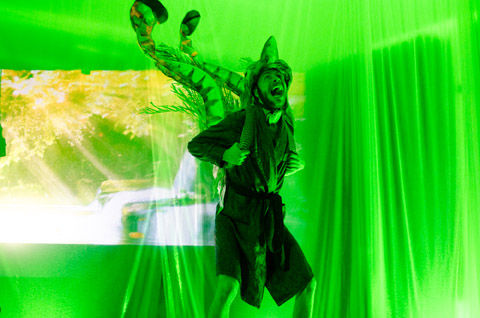 Demons is an unwieldy text. The adaptation by Albert Camus, first staged at the Théâtre Antoine in 1959, is lengthy and humourless. In 2010, Peter Stein mounted a world tour of a nine-hour I Demoni. Responses ranged from ecstasy to languor. The novel can be ponderous, and faithful renderings tend to buckle beneath its weight, where subtler interpretations such as Alexandre Marine’s ...the itsy bitsy spider... do not.

This tendency owes partly to the common difficulties of reconciling serial novels with the limits of dramatic attention, but Demons has more distinct problems. Dostoevsky’s original plan for the novel culminated in the final chapter ‘At Tikhon’s’, wherein Stavrogin confesses to the rape of a twelve-year-old girl, and to causing her subsequent suicide. Dostoevsky’s publisher Mikhail Katkov considered this dénouement too controversial, and much of the text was reworked around its absence. The results are causally obscure at the best of times. Pyotr was given a touch more of the Machiavel, and – with or without the final chapter – Stavrogin moves beyond the light of knowable motivations. These muddied waters may have been an improvement. Demons is much more ambivalent, and enigmatic, than the polemic the author originally intended. As it stands, the novel is strangely modern. On the hinge of revelation the structure of the conspiracy recedes into obscure immensity in a turn redolent of Thomas Pynchon. This is all a fascinating quirk of literary history, exploited adroitly by J.M. Coetzee in The Master of Petersburg (1994), but the knots in the structure of the text are obstacles to adaptation. Stokes’s solution is simple, but apt to the urgency of the play.

On 3 October, Andrew Bolt posted a fairly characteristic piece of work on his blog, roundly denouncing this play as a vehicle of sublimated and (incorrectly) state-funded leftist barbarism. It is observably nothing of the kind. Perhaps if Bolt had read more widely in the ‘Western Culture’ he purports to defend, or had consulted Google, he would have known that Dostoevsky’s mature work consistently criticises radicalism.

In a scene towards the end, footage of riot police and helicopters provides the only light in the room. James Brown’s sound design, hitherto minimal, conjures sirens and booted feet in stairwells. Kill the PM was written before the rise of the Islamic State, but it alludes to its antecedents. It sides finally, I think, with Dostoevsky, and even with Bolt, but does so uneasily.

Unhappen’s production of Kill the PM, adapted by Fregmonto Stokes from the novel Demons by Fyodor Dostoevsky, and directed by James Dalton. Presented at The Old 505 Theatre, in Sydney (October 8–26). Performance attended 16 October. 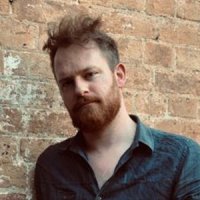 Jonathan Dunk is the co-editor of Overland, and the recipient of the A.D. Hope Prize and the Dal Stivens Award.

Jonathan Dunk is the co-editor of Overland, and the recipient of the A.D. Hope Prize and the Dal Stivens Award.