The Santa Fe opera house has a location as dramatic as Sydney’s. Perched on the top of a hill overlooking the town, it looks across the valley to the Sangre de Cristo mountains. What started out in 1957 as an open-air theatre has over the years grown a roof which covers the stage and auditorium, but the sides of the auditorium and back of the stage are still open to the elements. The operas are timed to begin as the sun sets and, depending on the whims of the opera’s designer, it is possible to watch it disappear behind the mountains as the conductor enters the pit. This year the weather has been unusually wet; storms, complete with lightning and thunder, have augmented the drama on stage. 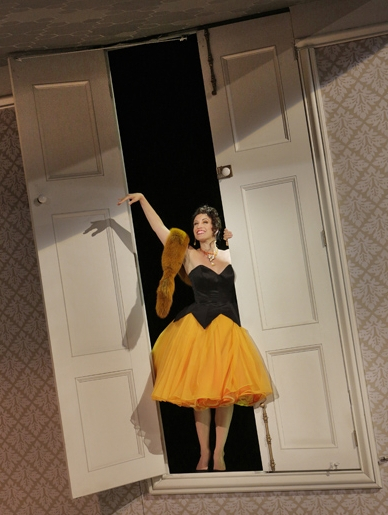 The opera season has not been stormy so much as patchy. A solidly cast Don Pasquale led by the wonderful Brenda Rae as Norina was let down by a hyperactive but not especially funny production and a conductor who mistook speed for vitality and left the singers floundering in his wake. This was followed by a well-performed but wildly overextended version of Mozart’s little skit The Impresario, which morphed into one of the undoubted successes of the season, an exquisitely staged and sung performance of Stravinsky’s Le Rossignol, in which Erin Morley’s nightingale soared vocally and physically over a splendid cast. Next came a Carmen which the audience loved and I loathed in equal measure. The director, Stephen Lawless, trivialised the piece and was of no help to a cast which needed all the help it could get. I had always considered the last scene of Carmen to be director-proof. I was wrong.

A stolid, under sung, ploddingly conducted Fidelio came next. When the two best voices in the opera belong to the Marcellina and the second prisoner you know you are in trouble.

The season was saved by its most audacious offering. Santa Fe Opera has always had an adventurous streak. Each year it presents either an unusual, rarely performed work or a new one. This year the company outdid itself. The distinguished Chinese tenor and artistic director of Opera Hong Kong, Warren Mok, commissioned an opera from the young Chinese composer Huang Ruo to celebrate the centenary of the 1911 revolution. They took as their subject the ‘father of the revolution’, Dr Sun Yat-Sen. It was supposed to open in Beijing, move to Guangzhou, and go from there to Hong Kong but although the libretto had been passed by the powers that be, at the last minute the Beijing and Guangzhou performances were ‘postponed indefinitely’. Until its American première in Santa Fe, Dr Sun Yat-Sen has only been seen in Hong Kong. To add to the intrigue, two weeks before opening night Mr Mok, who was to have sung the eponymous role, suddenly returned to China. A situation that – as I have learned from Linda Jaivin’s entertaining new novel The Empress Lover (2014) – the Chinese call fuza or ‘complicated’.

It is hard to see what there is in the libretto that might have offended the Chinese establishment. There is mention of corrupt officials, but they are Imperial Qing officials, not communist ones, and the ending in which the chorus sings ‘Whether we succeed or not is up to the people’ could have come out of one of Madame Mao’s red operas. 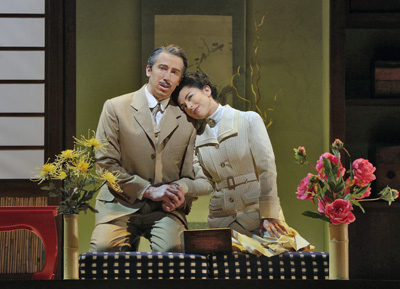 In fact, although the major events of the time are mentioned, the opera itself concentrates on Sun’s private life more than on his public one. We follow Sun from his friendship with the wheeler-dealer Charlie Soong through his abandonment of his first wife and his growing attachment to Soong’s daughter Ching-ling, whom he eventually marries, much to the disgust of her father. In many ways this is a very traditional opera plot. We start with a party scene, move on to a love duet, have a wedding interrupted by an outraged father and a spurned first wife, and move to a reconciliation scene between dying father and loving daughter. Interspersed with this we have dancers and chorus portraying corrupt officials, brutal mercenaries, and starving peasants. It is a mix of public spectacle and private drama similar to Verdi’s Don Carlos or Aida.

Huang Ruo studied Chinese music in Shanghai and, at the age of eighteen, moved to America to study at Oberlin and then at the Julliard. His music combines Eastern and Western elements and is underpinned by a lyrical quality and what seems to be an innate understanding of the possibilities of the human voice. In other words, he is a born opera composer.

The cast included two Chinese singers, Gong Dong-Jian as Charlie Soong and Chen Ye Yuan as Sun’s Japanese supporter Mr Umeya. The rest were mainly American, none of whom had previously sung in Mandarin or Cantonese – the languages of the libretto. I have no idea of the accuracy of their pronunciation but they managed to make difficult tonal languages sound lyrical. There were stand-out performances by the three female leads. 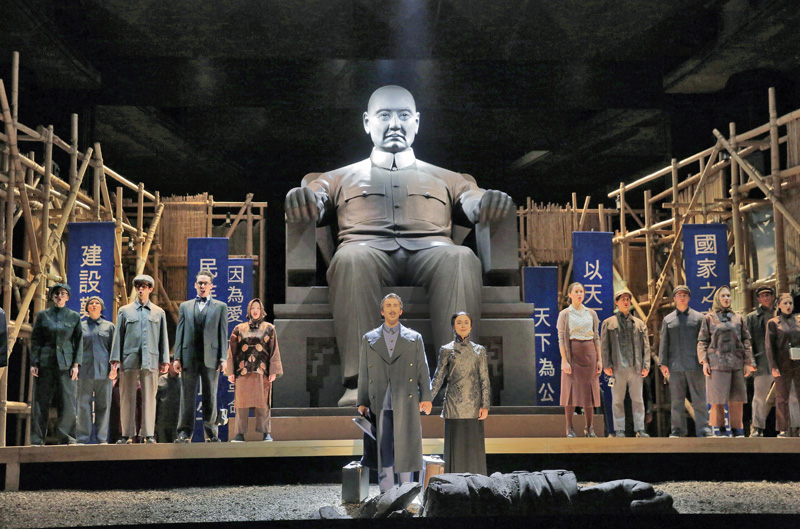 MaryAnn McCormick showed off her rich mezzo to advantage as Charlie’s shrewd and loving wife. Rebecca Witty as Sun’s first wife and Corinne Winters as Ching-ling made the most of their big moments and gave very moving performances.

Since the company had no prospect of persuading a name tenor to take on a role in a new opera in Mandarin at two weeks’ notice, when Mok quit they had to take a chance on his understudy, Joseph Dennis, a second-year apprentice singer. That chance paid off in spades. The young Mr Dennis may have lacked the ultimate in elder-statesman gravitas, but he was in complete command of his difficult role, singing with strength and beauty. It was an extraordinary achievement, rightly celebrated by the enthusiastic audience.

The director, James Robinson, marshalled his forces well. The stage was surrounded by bamboo scaffolding, suggesting change and renewal. There was very effective use of backlighting in one of the Japanese scenes, and the final image of a huge statue of Sun being dragged onto the stage as the man himself questioned his work and his legacy was very powerful.