For two non-indigenous artists to take a story that has deep meaning for an indigenous community and turn it into a dramatic cantata is an exploit fraught with danger. Australian culture is littered with attempts by white artists to incorporate indigenous themes into their works; works which have foundered due to their authors’ patronising assumption that they can appropriate the trappings of another culture and use them as decoration for what are essentially European-style creations.

This is a snare that Steve Hawke and Paul Stanhope have triumphantly avoided with Jandamarra, a retelling of a story from the Bunuba people of the Kimberley. The concept of a dramatic cantata is of course a European one, but Hawke, whose connection to the Kimberley stretches back over thirty years, has worked closely with the Bunuba to tell this story of theirs. 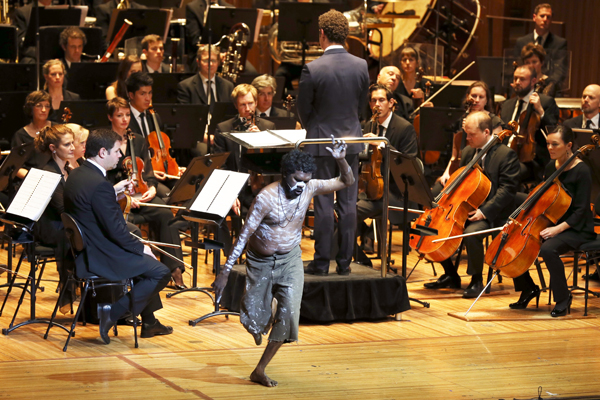 The story itself, which is based on fact, is a bleak one. As a boy in the late nineteenth century, Jandamarra alternated between living a tribal life and working on the newly established pastoral stations that were springing up in the region. At Lillimooloora Station, he developed a friendship with its loner manager, Bill Richardson. When Richardson left the station to become a policeman, Jandamarra went with him as his tracker. In this role he assisted the police in their capturing and jailing many of his own people, but his ambivalent position became too much for him. When he and Richardson captured a large number of Bunuba elders, Jandamarra changed sides, shot Richardson, and rejoined his people. The whites’ reprisals were brutal. Jandamarra waged a guerrilla war against them in which his extraordinary ability to avoid capture made him a legendary figure. It took another legendary tracker, Mingo Mick, to find him and shoot him, but Jandamarra’s reputation as a heroic defender of his people lives on.

Hawke and Stanhope, using massive forces to tell their tale, have taken this sad, brutal story and developed it into a powerful and moving work. The Sydney Symphony Orchestra was joined by the baritone Simon Lobelson and members of the Yilimbirri Ensemble and the Gondwana Choirs.

Jandamarra’s story is told in a linear fashion from his childhood friendship with the white son of a settler family to his death, but running alongside this factual account is the deeper spiritual current of the Yilimbirri Junba, a story song of the Bunuba which tells how the rainbow snake Yilimbirri Unggud deserts its people during the conflict between Jandamarra and the settlers. Jandamarra has to sing it home so that the land can heal.

Stanhope’s dramatic, approachable score includes traditional music from the Kimberley to great effect, and the Yilimbirri singers made a powerful contribution to the performance. In a show of defiance, the captured Bunuba elders start up a traditional chant which hammers its way into the skull of the drunken Richardson, sending him into a frenzy. Later, all forces combine in the beautiful Dirrari Lament, a requiem for Jandamarra.

Hawke uses two narrators: the settler Mary Bligh, whose son was Jandamarra’s boyhood friend, and Jini, Jandamarra’s mother. They give both a white and an indigenous perspective. Margaret Mills and Patsy Bedford imbued their roles with quiet dignity. Emmanuel Brown, who played Jandamarra, and the other men who act out the Bunuba elders, were telling their own story and made up in authenticity what they might have lacked in theatrical polish.

The Gondwana choirs, under their long-time founding director, Lyn Williams, covered themselves with glory. From the exposed prelude, ‘This Land is Full of Spirits’, to the grand finale, ‘This is Our Home’, they sang with beauty, accuracy, clarity, and superb diction. Conductor Brett Weymark kept his massive and disparate forces together and shaped the music with skill. 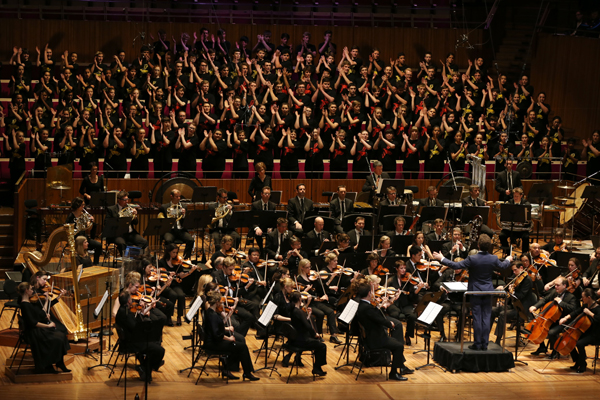 The audience’s overwhelmingly positive response at the final performance, which I attended and which I understand was equalled at the two previous ones, should give us hope that this ambitious collaborative work will soon be heard again.