This year we received 1,338 stories for the ABR Elizabeth Jolley Short Story Prize. We thank all our entrants.

Entries this year came from thirty-six different countries, a testament to ongoing international interest in the Jolley Prize and the magazine. Writers explored themes and topics including the pandemic, climate change, grief, desire, parenthood, and community across a range of genres. Here are the judges’ comments on the three shortlisted stories (presented here, as in the issue, in alphabetical order):

In the tense and atmospheric story ‘Dog Park’, Georgie takes her young son Max on a midday visit to the park where she watches from a shaded bench while he plays. Georgie’s protective love for her son infuses the story even as her desperate longing to shield him from potential pain or humiliation leads to growing tensions and an unsettling confrontation. ‘Dog Park’ is a tender examination of the evolving relationship between an anxious mother and her growing child that is filled with nuanced observations and telling details. The complex interactions between the characters in this story are particularly convincing.

In ‘Natural Wonder’, the narrator watches over three boys – her son and his two cousins – as they spend the first days of a new year playing at a beach on Sydney harbour. This story of children swimming and fencing with toy lightsabers on the sand has a gently melancholic undertow: it emerges that the cousins have experienced the recent trauma of losing their mother. The narrator feels a strong urge to protect and comfort her nephews, but she is also drawn to ideas of escape and freedom. The story is remarkable for its quietness, acknowledgment of knotty feelings, and the room it makes for small miracles.

The bullying of Bernard Tusk at a school for boys ‘of shallow prospects’ is conveyed in a wry, uncanny, and almost defamiliarising way in ‘Whale Fall’, which uses the beaching of a whale carcass as a metaphor for pointless death. As an implicated but also threatened observer, the narrator takes us through the destruction of Tusk who, like all the younger boys, vaguely seeks ‘cool’, but can’t attain it. The triggering complicity of the narrator is both strangely self-exonerating and self-accusatory as he tries to figure out his role between collusion and empathy. The story skilfully examines a fraught complicity and guilt.

The overall winner, who will receive $6,000 from the total prize money of $12,500, will be announced later this month at an online ceremony (details anon).

The shortlist was chosen from a longlist of fourteen stories. The other eleven stories in contention at this level were: ‘by the hour’ by Diana Clarke (New Zealand), ‘Case Notes’ by Sonja Dechian (Vic.), ‘And Then There Is Pink’ by Madison Griffiths (Vic.), ‘Glads’ by Susan Hettinger (United States), ‘half-moons filled with jam’ by Andy Kovacic (NSW), ‘Born for You’ by Magdalena McGuire (Vic.), ‘The Mend’ by Bruce Meyer (Canada), ‘Blowing Up’ by Alec Patrić (Vic.), ‘Not-John’ by Jonathan Ricketson (Vic.), ‘Zamek’ by Alex Skovron (Vic.), and ‘human material’ by Tracey Slaughter (New Zealand).

ABR warmly acknowledges the generous support of ABR Patron Ian Dickson AM, who makes the Jolley Prize possible in this lucrative form. We congratulate all the longlisted and shortlisted authors.

Jennifer Down has won the 2022 Miles Franklin Literary Award for her second novel, Bodies of Light. Susan Midalia reviewed Down’s book for the October 2021 issue of ABR, placed it in the tradition of the ‘feminist Bildungsroman’ and praised the ‘psychological astuteness’ of its ‘pared-back language of abuse and repression’. Down is a past winner of the Jolley Prize. Her story ‘Aokigahara’, which won the 2014 prize, exemplifies her mastery of spare yet resonant prose. 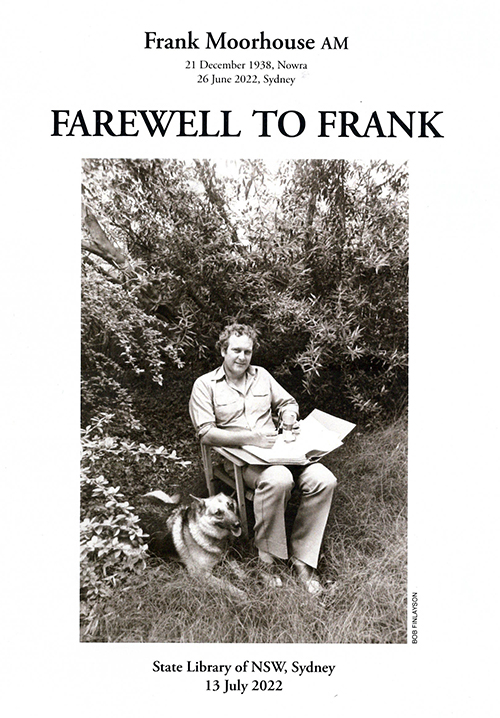 We tend not to panegyrise local writers and artists in this land, but the death of Frank Moorhouse on 26 June proved rather different, eliciting the sort of coverage normally reserved for sporting personalities and plutocrats.

Moorhouse, who had not been well, died aged eighty-three. Many of the valedictions concentrated on his Edith Campbell Berry trilogy, largely because of the controversial exclusion of the first volume, Grand Days, from the Miles Franklin Literary Award, a fate not visited on the second novel, Dark Palace, which won the 2001 Miles Franklin Literary Award. (The third, Cold Light, was also shortlisted.) But connoisseurs of this inventive satirist looked back fifty years to discontinuous narratives such as Futility and Other Animals and The Americans, Baby – so influential at the time, brave too given the asinine censorship and homophobic policies of the time.

Moorhouse’s dedication to the protection of copyright and his role – not single-handed, but significant – in the creation of public lending rights have also been cited.

On 13 July, a large audience gathered in the Friends’ Room at the State Library of New South Wales for a ‘Farewell to Frank’. Ten speeches at a memorial service can seem de trop, but not on this occasion. First we heard from Frank’s elder brother, Arthur, who charmed everyone with his recollections of their childhood. Young Frank, growing up in Nowra and fantasising about Sydney, was always convinced that cars must drive right over the top of the Sydney Harbour Bridge – and was shocked when this proved not to be the case.

Other speakers included Dona Anderson and Nick Horne, who talked about Frank’s long friendship with his late father, Donald. We heard from Frank’s long-time publishers Jane Palfreyman and Meredith Curnow, whose esteem for their lunch-loving, polymathic author was evident. Last came Tom Keneally, beaming, infectious, fraternal. Hilarious if unexpected was his account of the night he accompanied Moorhouse to a strip club. Keneally ended on such a rousing and celebratory note it felt like being at a gospel meeting. Then people repaired to the rooftop bar – for martinis of course.