A decade before she died, my grandmother Lucy, whose Hebrew name was Leah but who was known to us as Nanna, decided to write her memoirs. English wasn’t her first language, let alone her second or third, so rather than write she chose to speak. When she was finished, the contents of eight cassette tapes were typed up and bound in blue plastic covers. Copies were made for both daughters and all five grandchildren, of whom I am the eldest.

I promised Nanna that I would read her words as soon as I had my own copy, but I wasn’t being honest with her or myself. Reading for me has always entailed a kind of resistance. You bring your eyes, ears, and hands to the page, but the page brings something back, a wilful presence thick with the effrontery of an encounter. I was fifteen years old at the time and had nothing to give. I was also angry at her for the way she treated us all during a difficult time in our lives. My parents were in the process of getting divorced and the old woman cast herself as the central character in the psychodrama, spitting rage and shame like a frying pan. In her mind, there were no such things as happy marriages – there were simply marriages. What everyone else called depression was, for her, simply living.

It’s been fifteen years since she left us. All but one of the copies of the memoir have been lost. The tapes too, in their bright orange covers, so incommensurable from their contents, haven’t been seen for a long time. I don’t even recall the last time I saw a tape recorder.

The great piano teacher Heinrich Neuhaus once wrote that for effective practice, all a student needed were their ears and a recording device, so that they might be able to listen back to themselves. Ears can indeed be great teachers. On the whole, they can be trusted. But ears can also be dead flesh, as capable of carnage or compliance as eyes or hands.

Two months ago I asked my mother if she still had her copy of the memoir. After rummaging around in a crawlspace at the back of her house, she found it in a storage box. Unwilling to part with the original, she photocopied the copy and sent it to me in the post. When it finally arrived, I laid it on my desk, unopened. It remained in that state for a fortnight, gathering power, obnoxious and strange, like an atom waiting to be observed. I tried to go about my usual work but all the while felt the old woman’s lips tracing my ear, all mucus and mesh, muttering imprecations about this or that, a blocked vacuum filter or a dirty tablecloth; felt a forefinger dipped in spit and cleaning stains off my cheek, the way she did when I was a kid.

When I was young, if I blurred my eyes at a poem or piece of music, I’d imagine I could hear what it wanted to say beyond the shallows of the world. I looked at her words without reading them and right away felt those liquorice lips moonlighting as a grimace, two little fleshy hands bearing the weight of human horror, two vituperative eyes swimming like carrion fish in a muddy puddle. So much could be discerned even from the letters themselves, as each line writhed to free itself from those above and below, the text not breathing but gasping. My body braced, the way my personal trainer has exhorted me to do with my core, even though every artist knows that the core exists not above the stomach but in the heart.

As with many Polish Jews of her generation, Nanna’s lack of education was inversely proportional to her practicality. The result was a certain reverse snobbery, for my grandmother regarded my father’s Western European side of the family to be fake Jews but real Europeans, insulated from real suffering. But this idea that one could only truly suffer in Buchenwald or Treblinka and not in an internment camp in Hay or a mental hospital in Darlinghurst was a lie, one that thrust me – the oldest grandchild – into tricky territory. I had neither strong legs nor a stocky physique, neither the ability to fix things nor carry myself like Ridge from Bold and the Beautiful. In my grandmother’s eyes, this made me one of them. Naturally all this changed when I became a famous musician. Before the war, her late husband, my grandfather, had been a fine amateur musician, though no one could say definitively which instrument he played – he blew it, he held it sideways – so with no thought at all for my previous assignation, I was heralded as one of us. My grandmother – in appreciating art primarily for its social cachet, for its power to make Mrs Schmendrick envious because her grandson still worked at Woolies – was no artist, and in fact the capacity of art to do anything beyond mere show was incompatible with her personality. She once told me that she couldn’t understand how anyone could possibly love a dog who couldn’t do tricks. This sentiment captured something fundamental, even essential, to her personality. 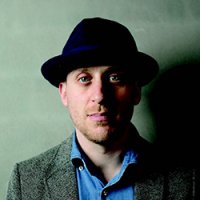 Simon Tedeschi has written for publications across Australia. When neither writing nor practising piano, he reads books and drinks coffee. He and his wife, the painter Loribelle Spirovski, live in Sydney, Australia with their cat. His first book, Fugitive, is due to be released in May 2022 through Upswell.