There are two famous statues in the Gundagai area. One is the Dog on the Tuckerbox. The other is of two heroes, Yarri and Jacky Jacky, who, with other Wiradjuri men, went out in their bark canoes on many exhausting and dangerous forays to rescue an estimated sixty-nine people from the Great Flood of 1852.

That statue wasn’t erected until 2017, but the white settlers did show their gratitude soon after the flood. They presented Yarri and Jacky Jacky with bronze medallions, which they wore on their chests with great dignity. Looking on at this ceremony, in Anita Heiss’s fictionalised version of the story, is Yarri’s young daughter Wagadhaany. She is bursting with pride, but at the same time she has deep misgivings. Why didn’t the town give her people blankets and food instead of medals? Why didn’t the white folk follow her people’s advice to build their houses on higher ground?

This scene sets the tone for Heiss’s account of Wagadhaany’s life on the cusp of white settlement, torn between the Bradley family, where she works as a servant, and her own family on the banks of the mighty Murrumbidya (Murrumbidgee), a river that brings both life and death to its human neighbours.

We meet Wagadhaany as a happy little girl in 1838, watching the new settlers build their houses, at a time when black and white people lived alongside one another in an uneasy truce. By the time she is a woman with children of her own, the balance has shifted to a point where the white man and his laws are in total control of every aspect of Wiradjuri life.

Heiss is speaking from both her research and her experience. She is a member of the Wiradjuri Nation of New South Wales, and that background has informed her work as an academic and author of historical fiction, commercial women’s fiction, non-fiction, play adaptations, children’s novels, and blogs. With its strong emotional pull and its accessible female hero, this novel deserves wide appeal.

There are moments of high drama and tragedy, not least the Great Flood, which leaves a distraught Wagadhaany clinging to the roof of the Bradley house with brothers James and David, the family’s only survivors. But this is not a tale of the worst of white settlement. Wagadhaany’s people know about massacres and rape and poisoning, but those horrors take place elsewhere. Instead, Heiss gives us a somewhat more nuanced portrait of a range of black–white relationships, always insidious because the white side of the equation has the power and dominion. As a servant, Wagadhaany lives what seems a relatively privileged life; but in reality she has no choices. She is in effect a slave.

The Bradley brothers force her to move away from her beloved family to a new homestead at Wagga Wagga. Grief has not improved them. James is an irascible drunkard who barely treats Wagadhaany as a human being and refuses to say her name: she is always ‘Wilma’. David, a somewhat underdeveloped character, seems kinder, but he turns out to be rather different.

The most interesting relationship is between Wagadhaany and Louisa, James’s new wife, one of the few ‘good’ white people. Louisa, from a Quaker background, is what we today would call a progressive: despite her husband’s scorn, she is passionate about improving the lot of the Wiradjuri people and educating their children, and she rails against the injustice of the white man’s law. Part of her project is to befriend Wagadhaany; another driver is her loneliness.

Heiss’s portrayal of this difficult friendship is one of the chief joys of her novel. The women reach out to each other in awkward ways, Wagadhaany always hanging back a little. We feel sympathy for both of them; it’s their mutual burden that they can never be entirely close because of their fundamental inequality. Eager and slightly patronising, Louisa never understands this. Wagadhaany understands it all too well.

Away from the cups of tea and scones at the Bradley homestead, Heiss shows us a different world at the Wiradjuri camps along the Murrumbidya, at Gundagai and Wagga Wagga, places teeming with children, grumpy old aunties, affection, and belonging. But here again, Wagadhaany is torn – between the family of her sweetheart Yindyamarra, father of her children, and the family she has been obliged to leave behind.

I could quibble about some of the detail in the English dialogue, which sometimes strikes a jarring, twenty-first-century note: would someone like James really say ‘too little, too late’? In other ways, the language is fascinating. Like other Indigenous novelists, Heiss makes frequent use of words in her ancestral tongue, in this case the Wiradjuri language, with a glossary to help unfamiliar readers.

It was a bold decision by the publishers to go with a Wiradjuri title (it means ‘River of Dreams’), but I think it will pay off. The names of the characters are also important. Yindyamarra means ‘respect, gentleness, politeness, honour, careful’ – a name he lives up to. Wagadhaany (pronounced Wagadine) means ‘dancer’.

Wagadhaany is frequently too weighed down with sorrow and fear to dance. But there is optimism in her step and a quiet, determined dignity in her character, and she is extraordinarily brave. Her friendship with Louisa gives her an occasional chance to speak her truth to the white woman with a freedom that must have been extremely rare at the time. Her deepest passion is reserved for her family, and that yearning fills Heiss’s story with poignancy and heart.

Like Louisa, I still have lessons to learn from Wagadhaany and her descendants. Heiss and other Indigenous writers are helping me, and keeping me entertained into the bargain. 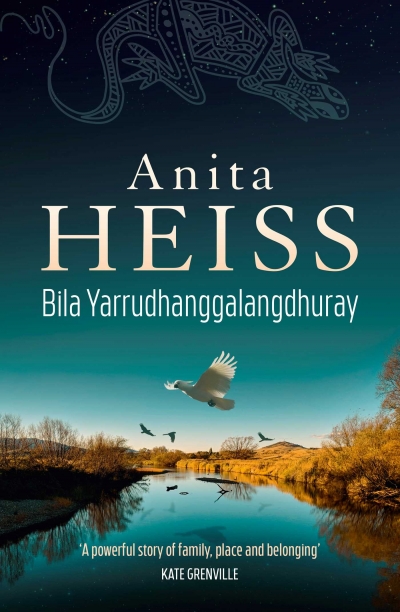