Olive Cotton: A life in photography by Helen Ennis

A lover of photography since childhood, by the time Olive Cotton, who was born in Sydney in 1911, was in her twenties she was already creating the pictures that were to define her as one of Australia’s foremost women photographers, although this would not be acknowledged until the 1980s. Apart from the photographs she made, Cotton left little material trace of a life that spanned nine decades (she died in 2003). This lack of physical evidence presented a challenge for biographer Helen Ennis, a former curator of photography at the National Gallery of Australia and an art historian, who has nonetheless managed to weave a compelling, if at times diaphanous, narrative.

The book is divided into six parts: Cotton’s personal journey, her evolution as an artist, the progress of the medium, and shifts in Australian society. This juxtaposition creates a fascinating historical account that is captivating and illuminating. Importantly, it also serves to ground a tale that is at times stitched together by supposition and possibility, Ennis acknowledging that, ‘as a biographical subject … Olive has surprisingly little weight’.

In piecing together Cotton’s story, Ennis has drawn on various sources: anecdotes from those who knew Cotton; Ennis’s own recollections of her friendship with the artist; Cotton’s children, Sally and Peter; the private papers of Cotton’s first husband, photographer Max Dupain; and the few personal items that Cotton kept in an old trunk on the property near Cowra, NSW, where she lived for more than half a century. The trunk’s contents, or lack thereof, are a metaphor for Cotton’s acceptance of the impermanence of life and of photography as an act of remembering.

The first half of the book is largely concerned with Cotton’s childhood and her burgeoning friendship, and later love affair, with Dupain. As the story unfolds, Cotton emerges as a woman of substance, a pioneer who was unafraid to challenge conventions but was also a romantic soul who wanted to live life with passion. As an eighteen-year-old, Cotton saw herself as a thoroughly modern woman who wanted to carve her own path, a view coloured by a life of privilege. Growing up in an affluent family, Cotton lived in a sprawling mansion in Hornsby with a live-in maid. Holidays were spent at the family’s beach house at Newport, where she first met Dupain when she was thirteen. Hers was not an idle life. Cotton studied for a Bachelor of Arts, attending university when it was rare for women to do so. Instead of going straight into teaching, as was expected, she chose to work with Dupain in his studio, where she attracted her own commercial clients. The studio was also a social hub, providing the pair with what Cotton labelled her ‘happy family’.

Cotton and Dupain married in April 1939, but their union was short-lived. Citing abandonment, Dupain was granted a divorce two years later; Cotton had moved from Sydney to Mittagong and taken a job as a teacher. Her refusal to return to her husband, as the judge ordered, was cause to ratify the decree absolute. There is a suggestion that Cotton felt her marriage was one of familiarity rather than passion, but there is little known of her feelings at this time. Rather, the narrative unfolds through Dupain’s private letters and anecdotes from those who knew the couple. This leaves the reader to imagine what might have compelled her to make such a dramatic life change. Divorce in those days was difficult, uncommon, and socially frowned upon.

Despite their personal problems, Cotton returned to Sydney to run the studio while Dupain was in the military. During this time, she was introduced to Ross McInerney, then a soldier. As Ennis notes, the portrait that Cotton took of McInerney in 1942, which features in the book, conveys an intimacy between the sitter and photographer that is undeniable. The glint in McInerney’s eye, his shy smile, and the close composition indicate that love most definitely was in the air, but it would be more than two years before the pair married. It wasn’t just romance Cotton craved, it was also dependability and sexual fidelity, desires she revealed in the few letters that remain of her correspondence to McInerney during the war.

When McInerney and Cotton married, the newlyweds set up home in a tent, where they lived without running water or electricity for several years before buying Spring Forest, the property near Cowra where she would spend the rest of her days. (Readers will recall Ennis’s ABR Fellowship essay ‘Olive Cotton at Spring Forest’, published in the July–August 2013 issue.) Here they lived in a two-room cottage and raised their two children before moving into the property’s old barracks in 1974. By all counts it was a remote and minimalist existence, but Cotton did not forsake the privilege of her lineage, taking her children for summer holidays to Newport while McInerney stayed behind. During these separations, Cotton and McInerney wrote to each other frequently. These letters were kept, offering a rare bounty to Ennis.

There are long hiatuses in Cotton’s career: twenty years between working in Dupain’s studio and opening her own in 1964 in Cowra, and another twenty before her work was widely recognised. Ennis connects Cotton’s intermittent photographic output to the overall narrative by interspersing chapters throughout the book that are dedicated to specific images. 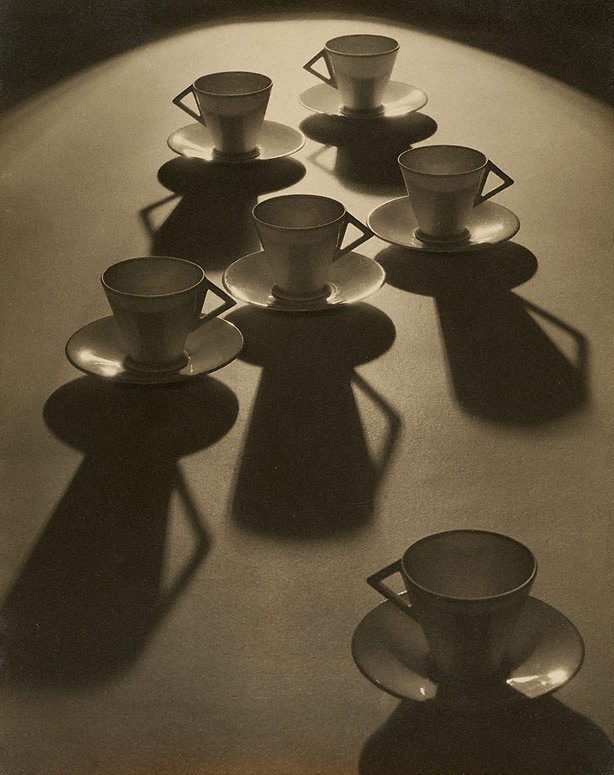 The chapters that delve into the nuances of Cotton’s photographic practice deliver some of the most satisfying moments in the book. In a chapter on Tea cup ballet, one of Cotton’s best-known photographs, Ennis discusses the artist’s capacity for ‘drawing with light’, Cotton’s description of photography. Cotton’s creativity and photographic skill come to the fore in this ‘ballet-like composition’ fashioned from inanimate objects. With Tea cup ballet, Cotton made her international début; the picture was exhibited in the London Salon of Photography in 1935. It wasn’t until fifty years later that Tea cup ballet became recognised as an exemplar of Australian modernist photography.

These short chapters deliver important insights into Cotton’s artistic practice, but the images also reveal aspects of her personality. Her resourcefulness is found in the intricate still-life compositions made from everyday items; her romantic heart is reflected in her capacity to find the exotic in the ordinary; her willingness to experiment can be seen in the play of light and shadow; and her love of nature is indicated in her intimate depictions of the natural world.

While Ennis has proven her skill in crafting an engaging story about a woman she describes as ‘a background figure’, the weakness of the book lies in the poor reproduction of Cotton’s photographs. This is incredibly disappointing: the pictures are crucial to introducing a new audience to Cotton’s work and to demonstrating why she is so important to the history of photography in this country. 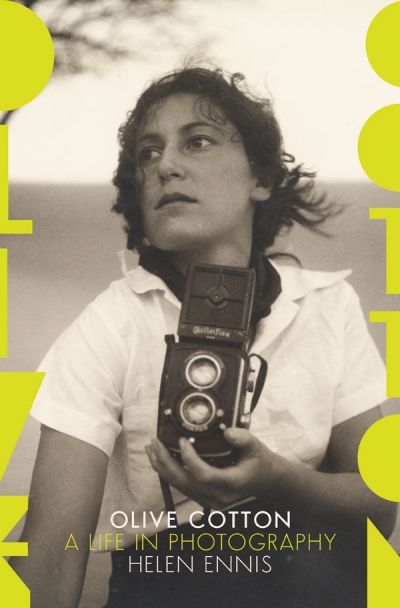 Olive Cotton: A life in photography